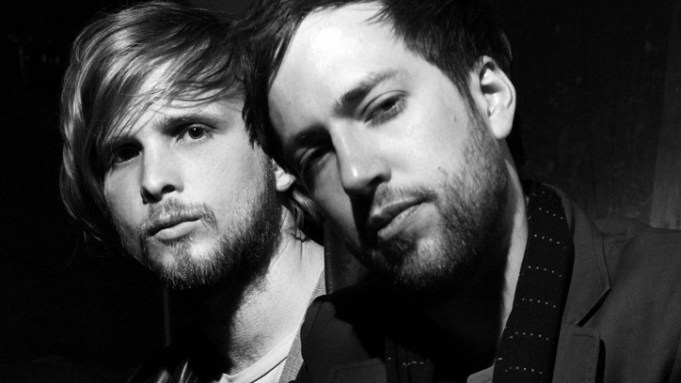 A few fresh faces creating some buzz around town.

Austrian Peter Pilotto and Libya-born Christopher De Vos met during their design studies at the Royal Academy of Fine Arts in Antwerp, and formed the label after graduation. Their collection made its London debut two seasons ago, and spring 2009 is the first season they’ve received New Generation sponsorship to stage a show.

In the past, the duo have focused on offbeat prints: Their fall 2008 collection spotlighted patterns resembling cosmic starbursts. The collection as a whole featured structured garments such as wool coats with origamilike folds. For spring, the designers said they’ve taken inspiration from ideas that run from “a modern grotesque,” to “abnormal art,” using colors that mimic “the contrast between the subdued moth and the vibrant butterfly.” Retailers currently stocking the line include Colette in Paris, and Opening Ceremony in New York and Los Angeles.

A former model and her designer pal are throwing their hats into the fashion ring. Girl about town Ben Grimes — a former face of Burberry’s Brit fragrance — and her friend Lily Parker, who has worked for Richard Nicoll and Henry Holland, will launch their fledgling line, LPBG, for spring. As is often the case among scenesters-turned-designers, the line emerged as a result of frustration over not being able to find the perfect party frock. To wit, dresses will be a mainstay of the collection, along with silk shorts and jackets. “Even the most structured pieces have a bit of nonchalance to them,” said Grimes. The duo will hold a presentation during fashion week rather than a runway show.

Natascha Stolle, a Virginia native, was plucked from the lineup at the Central Saint Martins’ masters of arts show last season to join the Fashion East trio — along with David David and Louise Gray. For her MA show, she sent out pieces such as gray sweatshirts bunched up at the elbows paired with sleek pencil skirts made from faux patent crocodile leather.

For spring, Stolle said her collection will reflect “my first experiments playing dress up in front of a mirror, with blazers and tailoring done in jersey — really easy and fun.”

Before starting on her MA, Stolle worked in London design studios, learning pattern cutting. She also holds a degree in English Literature from the University of Virginia. But she says the bonnets and petticoats that pepper English lit won’t seep into her work any time soon. “I do write really good letters asking for money, though,” she laughed.

French designer Charles Anastase is based in London, but since he launched his namesake line in 2004, he’s shown his ready-to-wear collections in Paris. This season, however, he’ll launch his collection of full-skirted tulle dresses — all inspired by an imagined 19th century childhood — at a deconsecrated 19th century church in London’s Marylebone neighborhood. But Anastase, who’s just signed a manufacturing and licensing agreement with Italian manufacturer Pier SpA, said he won’t be departing from his familiar themes.

“There’s no inspiration at all, I just do a drawing,” explained Anastase of the process behind his spring collection. “I think young designers can get lost trying to illustrate too much of a theme. I do the same clothes every season — I do it on purpose. When I buy clothes, I like to buy the clothes I know — the same jumper, the same shirt.”

That said, Anastase says he will be experimenting with new materials like leather for spring. Anastase’s collection is sold at stores including Barneys and Linda Dresner in New York and Browns and Matches in London. Celebrity fans of the line include Keira Knightley, Chlöe Sevigny and Emma Watson.

Stockholm-based knitwear specialist Sandra Backlund relies on instinct when creating pieces for her four-year-old line. “I improvise and invent the pieces while I’m doing them,” she said, adding her work incorporates handicraft techniques, such as crochet, patchwork and collage. Backlund, who collaborated on knitwear pieces for Louis Vuitton’s fall 2007 collection, favors strong sculptural silhouettes that highlight or distort the natural body shape. The 33-year-old, who has picked up a plethora of awards, including the 2007 design prize at the International Festival of Fashion and Photography in Hyères, France, currently offers a bespoke service to clients. The New Generation-sponsored designer will show her spring collection at the London Fashion Week exhibition tents.

For London-based Mary Katrantzou, what you see is not always what you get.

The Athens-born designer, who set up her namesake label after graduating from Central Saint Martins this year, has a penchant for print and trompe l’oeil in particular. Pieces from her graduation collection featured a combination of real and printed oversize jewelry.

“Some of the pieces of jewelry would be impractical if they were real, so it’s cool that you’re able to ‘wear’ them,” she said, adding trompe l’oeil prints will also play a part in the collection she’ll show at her exhibition space in the London Fashion Week tents. Katrantzou, who is 25, currently sells pieces, including dresses ranging in price from 400 pounds to 500 pounds, or $745 to $932 at current exchange rates, directly to clients.

Since Nasir Mazhar cut his design teeth creating hats for the theater, it stands to reason the 25-year-old embraces the dramatic. “I made up a story,” said the London-based hatmaker, describing the collection he’ll show in a presentation during London Fashion Week. “It starts in the 11th century. There’s some sort of pandemic. Death. Scientific testing. Funeral. Now we’re in the 15th century. The end. It started there, let’s see where we’ll finish.”

Mazhar, who trained as a hairstylist before turning to hat making, has already topped Madonna’s crop with one of his headpieces and worked on theatrical productions at The Royal Opera House and the Barbican. He currently offers bespoke hats priced between 300 and 2,000 pounds, or $559 and $3,737, and is working on a line of caps for next year.

Australia-born Josh Goot might not be a complete neophyte — he’s shown his collection of clean, sporty dresses and separates in New York since 2006 — but September marks his first appearance at London Fashion Week. “I wanted to try something new and different,” said the 28-year-old Goot, whose studio is still based in Sydney. “The way the collection is evolving creatively suits the London environment.” Goot’s inspirations for spring seem to match the cool aesthetic of the designer’s previous collections — he said he’s taken his cues from “water, purity and geometry.” Goot, who is self-taught, currently counts Henri Bendel and Scoop in New York, Browns Focus and Liberty in London and Maria Luisa in Paris among his retail accounts.