Paris has long been a hotbed for young design talent. Here’s a look at a few new names vying for the spotlight. 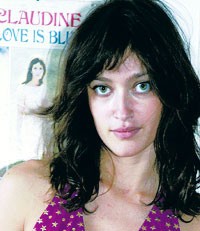 Paris has long been a hotbed for young design talent. Here’s a look at a few new names vying for the spotlight.

She founded her label — Anahita — this year after working at Vivienne Westwood, Nicole Farhi and E2. “I was ready to do my own thing,” she explained.

Her style is part party girl, part French sophisticate with cocktail dresses in bright colors decked out with graphic Seventies-style sequin decorations. Blouses reveal the navel, and military vests are embroidered with fruit.

“The creations are all one-of-a-kind,” said Vessier.

But what sets Vessier apart is that she doesn’t only scour flea markets for old frocks, which she then recuts and decorates — she also travels abroad in search of old fabrics.

A recent trip to Iran yielded several bolts of richly embroidered silks. “The next collection is inspired by Afghanistan,” explained Vessier, a striking presence with olive skin and deep green eyes.

“The clothes are sexy and modern,” she added. “They’re feminine and elegant, but with a rock ’n’ roll twist. I want to make girls feel confident and pretty.”

Charles Anastase, winner of a prestigious grant this year from France’s ANDAM fashion foundation, will make his Paris runway debut Oct. 4. His style is playful and feminine, and he describes his effort for spring as being inspired by fairy tales of all sorts, from Grimm’s to “Alice in Wonderland.”

“I like the idea of a giant girl wearing a shrunken jacket,” the 25-year-old designer explained. “The color patterns on the dresses are almost hallucinogenic.”

Like many young designers who have trouble finding a backer, Anastase has learned to be self-reliant. His mother knitted the one-of-a-kind sweaters in his collection, and he’s uncovered several small ateliers outside of Paris to sew up his creations.

Striking in Anastase is his talent for drawing. Many of the prints in his collection are ultra-realistic renderings of his friends, and he has made a collection of ornate hand-painted silk T-shirts. His drawings are also featured in a porcelain collection that he has created with Jacqueline Champagne.

Since participating in the fashion festival in Hyeres, France, a few years ago, Anastase has used his drawings to illustrate advertising campaigns and in magazine fashion spreads. He also designed shoes for France’s Eram.

He said all his artistic activities come from a similar urgency to give his fantasy world voice. “I like transforming the world,” he declared.

Having honed his skills working three years with Hedi Slimane at Dior Homme, Nicolas Andreas Taralis, 29, struck out on his own in March with a capsule collection. This season he’ll stage his first runway show, on Oct. 5 at the Rive Gauche nightclub.

Taralis, who studied at the Parsons School of Design and the University of Vienna, blends elements of punk rock and army uniforms for a style he calls “androgynous with a strict silhouette. I feel that they are clothes to be worn at night.”

Coats and trousers, for instance, are decorated with bands and utility straps. “There is a fetishistic part in the collection,” said Taralis, who was born in Canada. “There’s a little punk rock to it, too. The collection’s all black and white.”

Denim, from miniskirts to tight trousers decorated with spangles, adds another masculine aspect to his designs. “I learned a lot with Hedi, but I’ve always thought of myself as a women’s designer,” said Taralis. “But when I do feminine and soft, it still has a uniform side to it.”