By Mimosa Spencer and Tianwei Zhang on January 19, 2021

Pierre François Valette established his label Valette Studio last year, intent on updating men’s tailoring for the modern dandy. Winning the Saint Laurent Institute Prize in 2019 set the wheels in motion for creating his own label, earning him support from industry veterans, including Bruno Barbier, formerly of Balenciaga.

“The idea is to work on a suit, but a cool suit, with fluidity, that can be worn all day, that’s accessible,” said Valette.

For the Saint Laurent prize, the mission was to choose an iconic piece by Yves Saint Laurent from the 1960s, when the designer set down roots on the Left Bank of Paris, and rethink it for current times. Valette drew up a sharp, pin-striped jumpsuit, with no sleeves, a striking piece that serves as the starting point for the brand’s offer of precise tailoring meant to be worn with ease.

The designer began his studies in law, but knew early on that he wanted to move on to a creative field.

Quoting a French saying, which declares that law can lead you anywhere — as long as you leave it — Valette began mulling the idea of fashion or interior decorating his first year in law school. But he finished his degree before switching to fashion school — following his father’s advice of carrying a project through to the end, even if you end up changing direction afterward.

His mother also provided support, giving him her sewing machine and admitting her interest in fashion. She became a doctor instead.

“My mother supported me a lot — she would say, ‘I have two daughters and a son, and I gave my sewing machine to my son,’” he recalled.

“It’s true, people say fashion is fast-moving, you’re always doing something, redoing it, doing it better, doing it differently — I like this about it,” said Valette.

The law studies helped prepare him, he noted.

“And I don’t regret having done this track, which taught me organization skills, rigor, the ability to work fast,” he said.

Classical music training while he was growing up also gave him a background that would help his fashion career. As a youth, he studied at a conservatory — playing various instruments including the accordion and violin, and performing in concerts each week, as well as taking part in an opera production of the “Magic Flute” directed by artist William Kentridge.

“I did a lot of staging and I think this is what drew me to the world of theater and costumes — fashion may be commercial, but it’s also, fortunately, artistic,” he noted.

While studying fashion, an internship at the studios of Isabel Marant sealed his interest in pursuing the field.

“Isabel Marant convinced me definitively that this is what I wanted to do,” he recalled.

His education in fashion was then rounded out by a stint at Saint Laurent, where he joined the tailoring studio and as part of the brand’s institute, learned all aspects of the business, from suppliers, embroidery and merchandising. — Mimosa Spencer 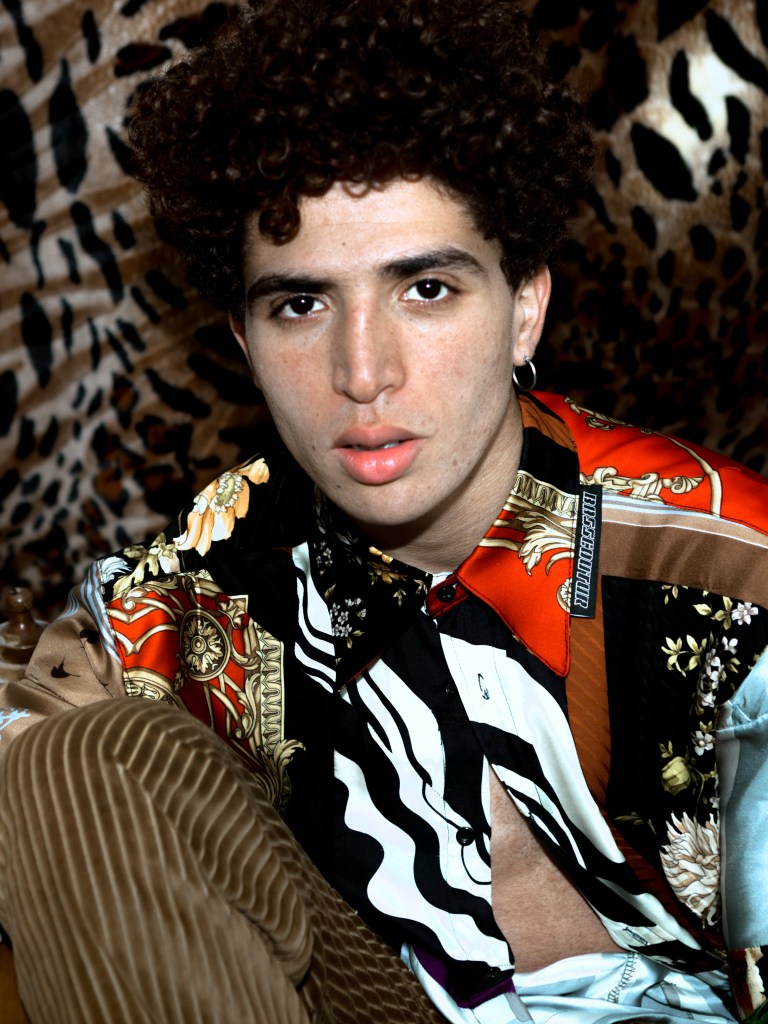 Fashion brands are scrambling to find ways to push into upcycling, recycling and making use of deadstock, but here’s a brand founded on the principle of breathing life into existing fabrics. Riad Trabelsi started out in vintage — ferreting out pieces for himself, then friends, and eventually setting up a stand in a flea market. Then he reworked the clothing, and his prototypes drew praise.

“At the core of it, it was about wanting to be fashionable, in an economical way, and you can find cool things, and for me, there was also a personal side — like a lab for discovery, ” he said.

“Little by little, things came together, it was really accidental,” added Trabelsi.

Now the label is presenting its fourth collection.

“For three seasons now we have been trying to do something cool, not too pretentious, current and in phase with our lives,” said Trabelsi. “For the moment it’s going pretty well.”

French, with North African origins — his father is from Tunisia and his mother is from Algeria — Trabelsi has sought to mix French and Tunisian influences. He sources materials in Tunisia, and describes treasure troves of fabrics he has found in sprawling factories there.

“You go somewhere to buy old velvet and you end up with tons of leather,” he laughed, explaining that stocks from Europe end up being sold in Africa, which gave him the idea of setting up the brand.

“I thought there’s got to be something to do with this,” said Trabelsi.

“In general, I don’t really have a period of influence, or a movement — I like army clothing, I like English tailoring, I like Italian tailoring, I’m passionate about masculine shoulders,” he said.

Collections are fashioned according to what’s available — patching together old silk scarves to make new pieces, buyers didn’t understand that each item would be unique, he explained.

“Buyers are still a little afraid of it — this is the only sticking point. But things are going pretty well,” added Trabelsi. — Mimosa Spencer 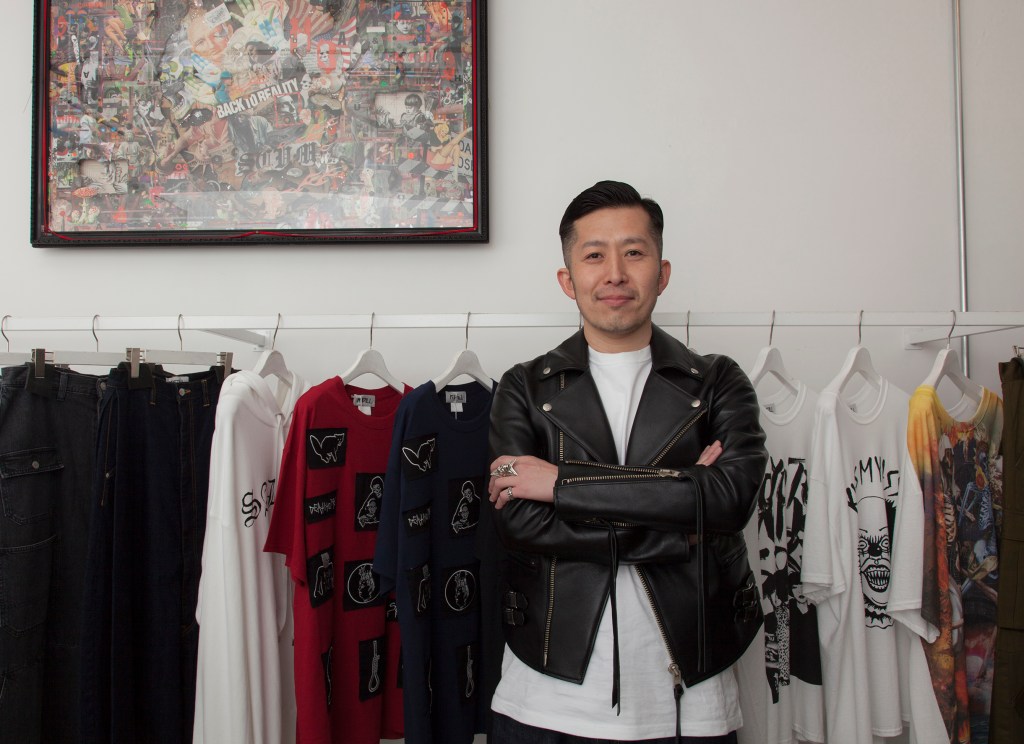 A self-taught designer, Hiroaki Sueyasu launched Kidill in 2014 to express his admiration for punk music and the grunge cultures he encountered in the 1990s. The brand will be making its Paris Fashion Week official schedule debut this evening with its fall 2021 collection.

Trained as a hairdresser in Japan, Sueyasu started learning about fashion as a hobby after he moved to London in 2002. The first item he made was a pair of denim pants remade from Levi’s.

“I bought clothes at secondhand shops and disassembled them by hand, sewing embroidery and stuffed animal accessory parts,” he said. His designs were first carried by London concept store The Pineal Eye.

The brand made its fashion week debut in Tokyo in 2014 and opened its flagship Kidill Room in Tokyo’s trendy Shibuya neighborhood. He later received the Tokyo New Designer Fashion Grand Prix in 2017.

His approach to fashion resembles that of graphic artists from the punk age. The brand has collaborated with artists such as Public Image Limited, Sheila Rock, The Damned, Siouxsie Sioux, Peter Murphy, Jamie Reid and Winston Smith.

“Punk is not only a fashion style, but also a way of life and way of thinking, and as a mentality, I want to be a punk,” Sueyasu said.

For the new collection, Sueyasu collaborated with American visual artist Jesse Draxler on a textile graphic. “He is the artist that expresses the darkness by different methods such as painting and collage. I was completely fascinated by the beauty of jet black that he created,” he added.

The brand also invited Japanese musician Keiji Haino, “the dark wizard of avant-garde rock” according to NPR, to perform during the filming, which took place last week in Tokyo.

“His way of life is punk, and he pursues his own style without compromise and practices it at a high level. He is also a very romantic man. Without being bound by the category of noise music, I was fascinated by his style that always incorporates new elements,” Sueyasu said. “Music and fashion are different genres, but I believe there is definitely a spiritual connection.”