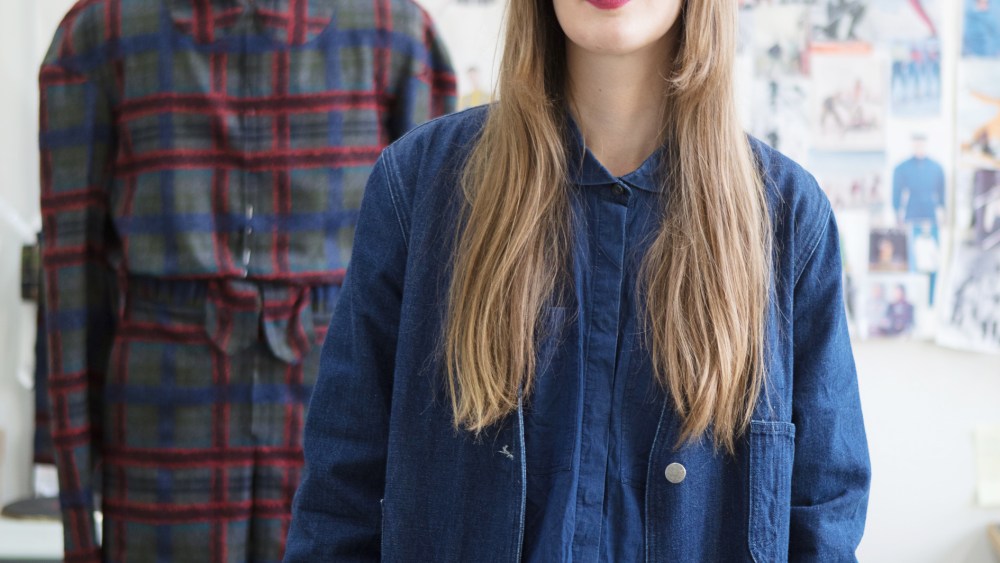 Fomme. It’s a portmanteau of “femme” and “homme,” and the name for Sarah Effenberger’s label, which seeks to soften the edges of men’s wear.

Effenberger takes the codes of women’s fashion — Peter Pan collars, rounded pockets, nipped-in waist jackets with padded hips descended from the Dior Bar jacket, pussy bows at the neck — and integrates them into sophisticated men’s designs with a nostalgic touch.

“The man was always the pioneer and the peacock,” said Effenberg, referencing fashion history. “I just want to say ’hey wait, men — you had this before, then you lost it, why not do it again?’”

Fashion editors and stylists seem to agree. Fomme was the name of Effenberger’s 2015 MA graduate runway collection for Berlin’s University of the Arts. It caught the eye of Vogue Germany editors, who invited her into last January’s Vogue Salon, so she rushed the label into existence.

Since Vogue focuses on women’s wear, they put her pieces on female mannequins, and pinned them to fit — creating an unintended clientele.

Due to demand, Effenberger says she will create women’s sizes, likely for her summer collection, but has no plan to design specifically for them.

“I conceptualize it for me, if I were a man. So the woman is already in there. That’s what I would wear as a man. It’s a feminine formulation.”

Fomme is sold in five stores in Tokyo: four concept stores and Seibu department store. But Effenberg hopes to broaden her reach, and is considering showrooms in London, New York, or Paris this year.

Julia Seemann didn’t intend to start her own fashion business right after school. But when her diploma collection was chosen for the VFiles Made New York runway in February 2015 and Rihanna wore one of her looks at Kanye West’s front row a day later, “it felt very natural to keep going,” she recounts.

With the celebrity stamp of approval, buyers’ attention was not far behind. “We immediately sold, but I didn’t have an actual production and I wasn’t prepared to run my own label,” said Seemann, who had just graduated from Basel’s Academy of Art and Design and interned at Vivienne Westwood and Meadham Kirchhoff.

“I had to learn that retailers expect consistency, so for the past year, we focused on establishing a smooth production in Germany and Switzerland. We’re now developing our distribution and branding strategy.”

Man’s best friend is an integral part of Von Hund’s (“From Dog’s”) style equation. Indeed, one of the first sell-out items in the label’s debut collection last spring was the India Ring dog harness in natural or black leather. However, not everything went to the dogs. Founders Isabelle Kücke and Rohan Hoole’s focus on affordable and functional basics ”that are special enough to speak for themselves” has put the make-now-buy-now brand for men, women and canines on track to generating a first-year turn sales of 500,000 euros, or $530,000.

Based in Berlin Neukölln, the label actually got its start in Bombay, where Berlin University of Art fashion graduate Kücke founded a hand-embroidery company (which continues to produce for fashion clients). She also met Hoole, in charge of making videos for Vogue and GQ India. They became a couple, and as Hoole wanted to leave India, they decided to create a fashion brand together in Berlin.

As a brand, they also left India behind, concentrating on Von Hund’s sourcing and manufacturing in Europe to keep closer tabs on working conditions and the entire production cycle.

Targeting customers “looking to move beyond disposable, mass produced merchandise” at a price they can afford, they opted for an initial e-tail-only sales policy to cut out traditional retail mark-ups. The fall price span ranges from 29 to 129 euros, or about $30 to $135, for Tencel blend, cashmere and cotton jersey Ts, cotton shirts and tops, and merino wool knitwear, wool and cotton pants, and assorted single items.

Design, they say, “is in the details.” Such as the slit mock T on their Thora sweater, the radical crop of the A-line Dea pants, cashmere jersey Ts cut extra roomy or supersnug with a tiny turtleneck. Moving forward, expect shapes to get more relaxed, but also a bit more exaggerated for basics that make a statement.

Also coming up: a Berlin store by the middle of this year, spurred by the unexpectedly high turnout at their first pop-up in December. “It’s important to have a physical imprint, and Von Hund is constructed to exist digitally and in the real world,” said Hoole. Wholesale is also being considered. And then there’s the matter of the dog: They’re patiently waiting for favorite Von Hund model and whippet Patti to find her mate and have puppies. — Melissa Drier