LONDON — Laura Hanning is on a mission to solve every woman’s handbag problem — and muscle in on the Longchamp market — with her newly launched label Faldan during London Fashion Week.

Her foldable, collapsable and stylish leather tote weighs as much as an iPhone, and can fit inside a Chanel mini bag. “I wanted to create a bag that’s not only functional, but looks beautiful and can be used in place of a standard cloth tote bag that doesn’t upset someone’s look,” Hanning said, adding that it needed to be lightweight and easy to store.

Faldan is Hanning’s first fashion venture. Not only is she being mentored by one of the team at Michael Kors, the patent-pending bag has already attracted interest from the likes of the British actress and “Absolutely Fabulous” star Joanna Lumley.

Until recently, Hanning was head of delegation in the UN representing Eastern Europe, including Mongolia and Kazakhstan. “I was helping out these places, but at the same time I felt so detached from them and from the action. So I left because I wanted to do something where I could see the difference and start by answering a very simple problem,” she said.

For Hanning, that problem was seeing professional women carry around ugly-looking bags next to their designer handbags to fit papers, groceries and other personal items.

She decided that tote bags stuck out like a sore thumb and often scrunched up, and that the next best alternative were Longchamp bags. According to Hanning, they had a crucial design element missing: foldable handles. 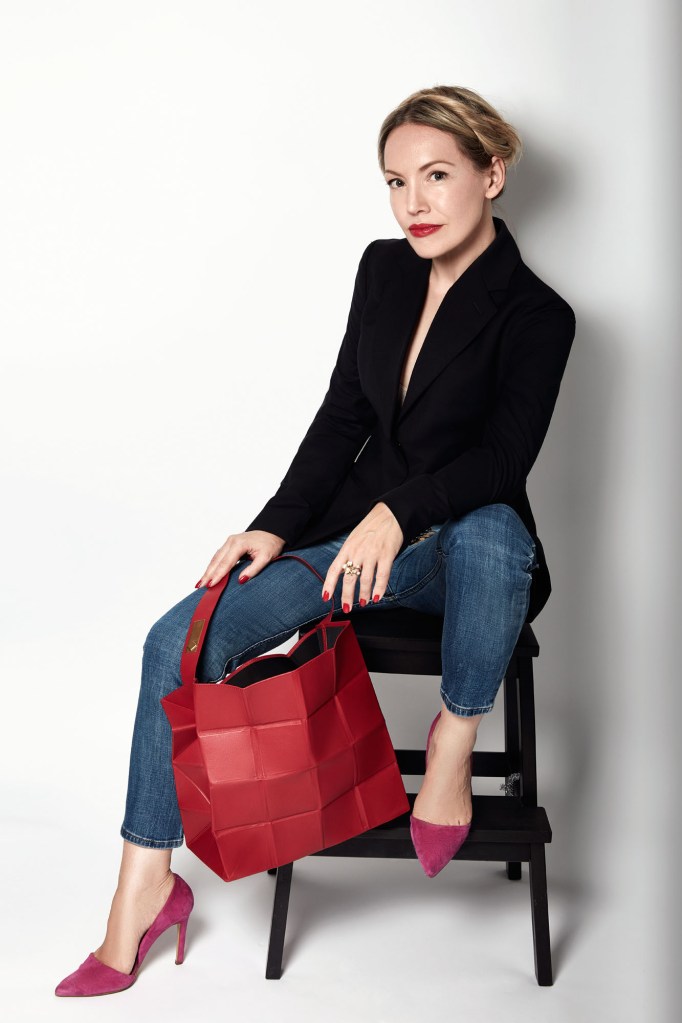 Laura Hanning with The Faldan Bag.

“Everyone talks about the ‘It’ bag, but what about that bag you are actually carrying all the time? A lot of people change their outfits and handbags all the time, but they always have the same tote, or a convenience bag,” she said.

To create her ideal, Hanning sought out origami designers in Japan and took an accessories design course at London College of Fashion. She trained herself in pattern-cutting and after four years of trial and error, was able to create a bag that ticked all of her boxes.

“One of the biggest challenges for me was making it intuitive. I don’t want the user to think about how they have to fold it, I want it to fold itself. I wanted to make it effortless and beautiful. For example, the handle wraps around the [folded up] bag and clicks shut, like the sound of a lipstick bullet,” Hanning said.

At the moment, the bag, which comes in one size and three colorways, is made with precisely 32 squares and 30 triangles that have been pieced together in a certain way. It comes in packaging made from recycled coffee cups.

“I spent ages calculating the triangles and squares, there’s a lot of math and geometry in it, so I applied the things that I love — numbers — into a solution for modern women,” she said.

Despite the 495 pound price tag and zero marketing, Hanning’s bags, which sell online, direct-to-consumer, have been selling out, with 80 percent of her clientele based in the U.S.

She plans to launch officially in the American market in March, to coincide with the plastic bag ban in New York. She’s also working on creating a nylon version of the bag that will be rolled out this coming London Fashion Week alongside the original leather bag.

“We want to be a part of that sustainability conversation in New York and present a different alternative. It’s expensive, but it’ll be the one tote bag you’ll carry forever,” she said.