Ones to Watch – Gen Art

Among the eight designers who sent their wares down the Gen Art Fresh Faces in Fashion runway, most of them showed promise. 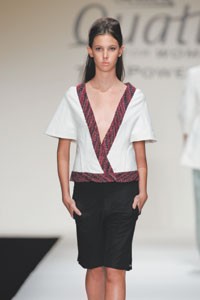 GEN ART: Among the eight designers who sent their wares down the Gen Art Fresh Faces in Fashion runway, most of them showed promise. Nanette and Grace Sullano, the sister act behind Bon & Ging, looked to the Autry Museum’s recent Sergio Leone exhibit for their spring collection; highlights included a Navajo-print trimmed top and a sandy brown shirt dress, both of which looked prairie and modern at the same time. There was a grab-the-weekender-bag-and-go quality to the striped tunics and cuffed shorts by Geren Ford. Rustic cross-stitches and rough leather straps were prominent features on Hazel Brown‘s gauzy gowns, while Katnic’s wacky leopard-printed and color-block swimsuits, trimmed in satin rope or fringe, were just the thing for downtown club kids spending a day at Rockaway Beach. Eco-friendly fabrics in utilitarian shapes were news at Undesigned by Carol Young, and tattoo iconography like metallic leather tiger faces and swords were appliquéd onto HotPants and A-line skirts at Fancy Pony Land.