Ones to Watch: London 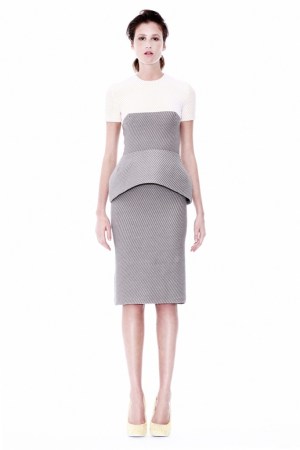 Inspired by the hand-knitting techniques he learned as a child in Brazil, and wowed by the trove of vintage fashion he discovered in East London after arriving in 2001, Lucas Nascimento is proud of his eclectic style background.

The designer, who was awarded the British Fashion Council/Topshop NewGen sponsorship this season, studied knitwear at the London College of Fashion and worked at Beyond Retro on Brick Lane. He has woven so many of those influences into his feminine collections with their clean lines and sculptured shapes.

“My approach really starts from the yarn — each season begins with a thousand possibilities and choices,” he said. “It’s sort of like a giant puzzle, with time spent trialing knitting techniques and yarn combinations alongside the development of shapes and artworks until you find the correct fit.”

The inspiration for his fall collection, he said, comes from landscapes and cityscapes.

Besides showing during London Fashion Week, he’ll be taking part in the London Show Rooms exhibition in Paris in March.

“I like reinventing the classics — the trench or the tote bag — and I’m not swept up by trends.”

So says Sophie Hulme, a denizen of north London, where she has her studio, and where she launched her cheeky, sporty ready-to-wear and leather accessories collections three seasons ago.

“I like to think that every piece I make is special, and I hope my customer is using my designs to build a wardrobe,” said the designer. Her inspirations this season are toy dinosaurs — “They have amazing gradients of color” — and Fair Isle knits, for their patterns and texture.

“We’ve done a dinosaur lace motif for a dress,” she said. “I like clothes where you look a bit closer and discover something new.”

Hulme’s outerwear is made from sheepskin and goatskin, while the bags are fashioned chiefly from cowhide — with some eel skin thrown in.

The line is now stocked at stores including Barneys, Selfridges, Liberty and Harvey Nichols. She said the collection has doubled in size this season, thanks to so many new stores, and she’s recently worked on collaborations with the British suitcase maker Globe-Trotter and with Onward Kashiyama’s Bus Stop chain of stores.

Claudia Catzeflis — her last name is Greek-Italian, and she is part British — never intended to go into fashion. As a student, she preferred photography and film, but it was her love of textiles — and their infinite textures — that led her to her current career.

“I normally start designing my collections with a textile technique in mind — this season, it’s thread and yarn pulling,” said the designer. “The pulls create check and stripe patterns on silk and chiffon fabrics, which I can then layer over prints.”

Catzeflis is new to the seasonal fashion rounds: She launched her first collection last season after winning a British Fashion Council/Elle Talent Launch Pad award, and said this year will be all about “trying to make my pieces more commercially refined and more accessible.”

While her spring collection was diaphanous and wispy with a loose, boxy fit, she said her fall line will have more weight — and more graphic elements — made from fabrics including crepe de chine and georgette. She has no retail accounts yet, and that’s another of her goals for 2012.

“It’s still early days for me,” she said, “and I need to focus on honing what I have and getting it to the people who can connect with it in the right way.”

After showing as part of the MAN showcase for emerging men’s wear designers last season, Miller is set to break out with a stand-alone show on London’s men’s wear day.

The designer, a 2009 graduate of London’s Royal College of Art M.A. program in men’s wear, is known for his clean silhouettes inspired by tailoring and sportswear, and his unexpected combinations of colors and textures.

For fall, the designer said he’s drawing on “the hidden beauty of everyday life,” that he finds in London, and in particular he’s focusing on materials such as concrete, wood, and geological formations.

Miller’s collection will also embrace the vogue for all things interactive. Each of the garments Miller creates for fall will come with its own QR code, which can be scanned with a smartphone to reveal an image of what the piece was inspired by, from an industrial-looking bridge in East London to peeling flyers posted on a city wall.

Miller, who set up his label for fall 2010, counts I.T in Hong Kong, GR8 in Japan and Daniel Jenkins in the U.K. among his retail accounts.

Hailing from China, the Central Saint Martins-trained Huishan Zhang said he aims to marry his Chinese heritage with Western experiences in his collections.

For fall, the designer experiments with the traditional cheongsam dress, but his versions are fashioned in fabrics like lace and tartan, drawing on what Zhang describes as “a cocktail of cultures and fabrics.”

Zhang launched his label for fall 2011, after having spent time in Dior’s couture atelier as a student. Three seasons in, his label, which he said appeals to a “timeless and elegant” woman, counts Browns in London and Joyce in Hong Kong and Beijing among its stockists.

For fall, Zhang won sponsorship from the British Fashion Council and Topshop’s NewGen scheme to exhibit at London Fashion Week for the first time. Zhang noted that London plays a huge part in his design process. Alongside his ready-to-wear collection, Zhang also designs a capsule line of made-to-measure pieces.