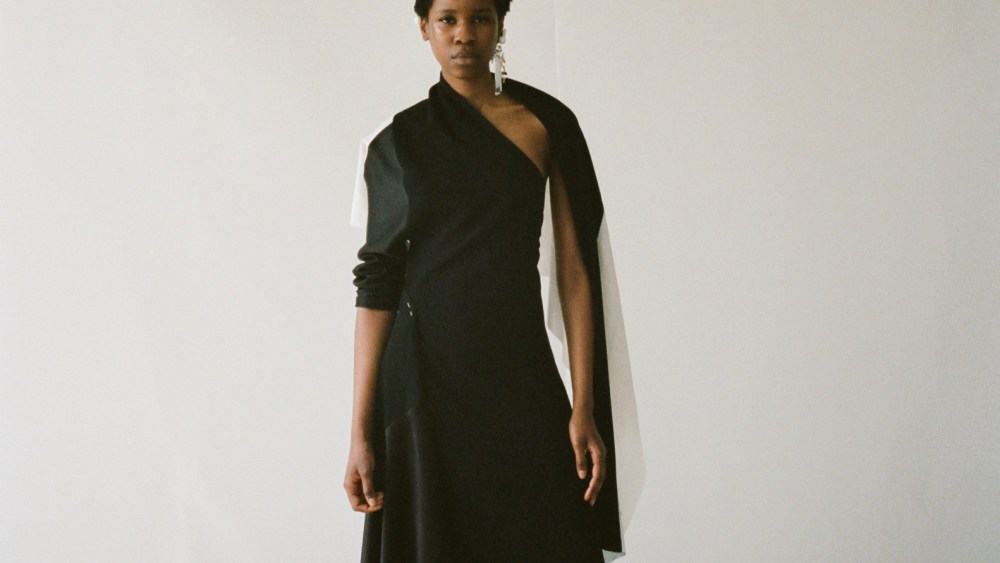 Emerging designer Peter Do wants to take a step away from that. He can be seen as the new guard of fashion, building up his infant brand through social media, where he counts more than 45,000 followers on his personal account.

He unveiled his namesake collection with spring 2019 during Paris market this summer — sans show, presentation, or press — and landed back in New York with nine confirmed stockists, including power players Net-a-porter, who will have a two-season online exclusive, and Dover Street Market Ginza, London and New York.

“This whole brand was put together by word-of-mouth and Instagram,” Do says during a walk-through of his large studio space in Brooklyn’s Industry City. “I’m quite active on there and post process photos and behind-the-scenes. A lot of buyers said they felt like they’ve known the company for so long because they saw me build the shelves, the table, saw the team go to Ikea. That’s the only p.r. thing we’ve been doing.”

His active approach online may have gotten him noticed, but the sophisticated subversion inherent to the brand encouraged orders.

Upon first glance, his spring collection has noticeable variety — spongey sheer separates, tailoring, graphic prints, trompe l’oeil dresses and lots of hand-draped elements. Highly editorial items like white sheer sets and drastically cut pleated skirts are interspersed with elevated wardrobe staples. Across all stockists, every single piece from the wide range was bought. It’s an impressive feat that would flatter a designer at any level.

“We wing it every day,” Do admits, adding: “It’s like a grassroots fashion launch. The only thing I know for sure is garment making and fabrics.”

Indeed, Do’s been able to garner experience from high-profile houses. As the inaugural winner of the LVMH Graduates Prize in 2014, he moved to Paris to work at Céline under Phoebe Philo for two years before coming back to New York to work at Derek Lam for about a year and a half.

He felt it was the right time to launch his own label with some key pillars. “I think it’s time to get back to garment making, producing things in New York, supporting the craft, supporting locals, authenticity, making clothes. I feel like nobody creates clothes anymore, everyone creates hype.”

His aesthetic boasts a confident blend of refinement, whimsy and comfort. There’s no better example of this than the sheer “spacer” fabric he developed as a student and refines each year. Think of it as a winter sheer — thin yet insulate, wrinkle-free and able to retain shape. He used it to reinterpret classics, cutting it into Ts, button-downs with cutouts, bras, five-pocket jeans, blazers and dresses. The dress has such versatile appeal that six women have contacted Do already about ordering it as a wedding dress.

A series of apron-inspired items is another conceptually driven touchstone that allowed Do to play with space and skin-baring elements. Many of these pieces feature open backs or are set with intentional crease lines to provide a worn-in effect he wants to emphasize. “I do believe you should buy your clothes and wear your clothes. It’s not just for special occasions.” A crushed and washed blazer with an allover wrinkle effect is another prime example of this lived-in quality.

Though the clothes may sound more experimental than everyday, Do assures they’re just normal clothes he’s making more interesting. There are playful top-and-bottom sets in a hand-dyed banana print, sleek coats and other coat and dress options with trompe l’oeil coat prints. He proclaims: “The void in American fashion is proper dressing. I think that there will be a return to beautifully constructed garments that are easy to wear — clothes for confidence, rather than pure comfort.”

But it’s hard to think of the clothes as “normal” given the designer’s process. He and his team don’t sketch, and prefer to fit and drape on the body. One of the more memorable dresses was created in this manner, featuring removable elements, an elongated sleeve and the overall feeling of labor-intensive handwork. Perhaps the normalcy comes through the surprising wearability of each piece.

Do is excited to see his clothes on customers beginning in November. He’ll akin the price point to Céline on sale — the spacer bra at $250, shirts at $300 and the apron dress at $990.

Until then, he’ll continue with his process and build personable connections with customers. “Peter Do is a brand built on the Internet,” he says, adding: “It’s important to remember that just because a brand is online, does not mean it has to be impersonal. This is how our generation interacts. As a brand, we’re embracing this shift. I want my customer to feel connected with the brand.”