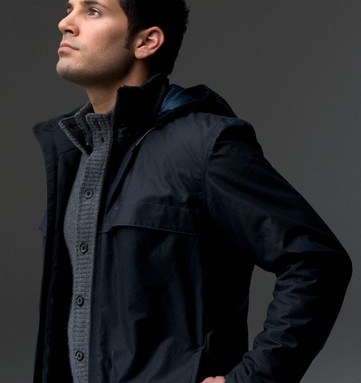 Indie designers, premium denim and contemporary sportswear are the focus at the Project and Capsule shows in New York next week, with the former staged from Sunday to Tuesday at the Jacob K. Javits Convention Center and the latter on Monday and Tuesday at the Angel Orensanz Foundation Center. While the economy has thinned out the exhibitor list somewhat, you can still expect about 350 brands at Project and 70 at Capsule. Here, highlights of some of the newest and most compelling lines at the two shows.

Aether
Jonah Smith and Palmer West are successful L.A. film producers, having brought to the screen fare such as “Religulous,” “Requiem for a Dream,” “A Scanner Darkly” and “The Clearing.” But the avid outdoorsmen decided to launch their own activewear brand, called Aether, last year when they couldn’t find performance apparel that blended stylishly into urban environments.

“We’re weekend warriors and we felt there weren’t any brands out there that spoke specifically to us,” said Smith. “We wanted to use technical advancements for clothes that strike a balance between form and function, for a guy slightly north of 25 years old.”

The result is a collection launching to consumers on an e-commerce site on Feb. 1, and first wholesaled to retailers at Project. The lineup includes seam-sealed jackets suitable  or snowboarding, casual hoodies and polos, and a waxed canvas jacket insulated with Primaloft that will retail for $1,095, the top price point in the collection. “It’s a super-lightweight puffer jacket that doesn’t make you look like you’re on a lift line,” noted West.

Unruly Heir
Incorporating its signature rebellious wit into its designs, youthful New York brand Unruly Heir is taking the recession head-on with the spring collection it will showcase for immediate orders at Project. T-shirts are adorned with prints like a bull and bear holding onto the Statue of Liberty for dear life as she sinks into New York harbor. A cap is stamped with a “Foreclosed” logo, while a polo shirt features a chest logo of a bull being speared and another T-shirt shows a gentleman playing polo while riding a messenger bike.

In another nod to the economy, prices for the collection have been brought down 30 percent, with Ts wholesaling for $16 to $19, polos for $35 and hoodies for $85. “We didn’t want to riff on the economy and then have exorbitant prices,” pointed out sales director David Rowan. Unruly Heir is currently sold at Bloomingdale’s, Fred Segal Fun, Kitson and Brooklyn’s Rime.

Rossignol + J.C. de Castelbajac
French designer Jean-Charles de Castelbajac and French skiwear firm Rossignol have collaborated on an outerwear collection for about five years, and that line will debut at Project New York for the first time this season. The collaboration melds Rossignol’s expertise in technical skiwear design and Castelbajac’s design vision, with the average jacket retailing for about $500.

For fall 2009 there are Lego-prints (via a partnership with the iconic Danish toy maker), shiny wet-look jackets, and gold and lurex threads woven into fabrics for a hyper-chic look. All the outerwear features technical elements ready for the slopes, like Lycra wrist cuffs, powder skirts, waterproof zippers, Gore-Tex fabrics and Thinsulate linings.

The Rossignol + J.C. de Castelbajac collection is currently sold in about 20 ski shops in the U.S., and the brand is aiming to enter more fashion retailers with its showing at Project, according to France Lessard, Rossignol’s marketing manager for soft goods in North America.

Current/Elliott
Looking for the next hot name in denim? Current/Elliott may be the ticket. Founded by L.A.-based fashion stylists and longtime friends Emily Current and Meritt Elliott in July 2007, the brand is already stocked at trend-forward doors like Barneys New York, Neiman Marcus, Ron Herman, Atrium, Scoop and Colette in Paris. Helping things along is financial backer Serge Azria, who also owns the Joie contemporary brand and is the older brother of BCBG’s Max Azria.

While the new brand has caught on quickly, Current is quick to point out the company doesn’t intend to be a flash in the pan. “We aren’t trend-based at all,” she explained. Rather, Current/Elliott’s point of differentiation is its authentic vintage washes and ultrasoft fabrics, for both men and women.

“The whole philosophy is about comfort, so there’s a slouch element to all the fits and styles,” said Current. “We spent a long time getting our fabrics as soft as possible, there’s almost a fuzz to them.” Retail prices range from $178 to $350, with men’s product comprising about 20 percent of sales and women’s at 80 percent.

April77
April77 was established in Grenoble, France, in 2001, but founder and designer Brice Partouche takes his inspiration from Americana and produces his trendy jeans in Japan — creating product that’s the best of all worlds. The denim retails for about $350, and has found its way into top U.S. specialty stores including Barneys New York, Blackbird, American Rag Cie and Seven.

The company has also launched a lower-priced basics line of jeans under its new April77 Records label, with denim retailing for about $140. As a unique selling point, each April77 Records item comes packaged with a code that allows the customer to download free music from the brand’s Web site.

“Music, youth movements and underground culture have always been the main inspiration for my design,” explained Partouche, adding he started his business because Grenoble is a boring town in the Alps.

The brand is sold out of the Archetype Showroom in New York. About 75 percent of April77’s sales are in denim and 25 percent in sportswear, with men’s product comprising 70 percent of sales and women’s 30 percent. Outside the U.S., April77 is sold in about 500 stores, including Selfridges, Dover Street Market and Lane Crawford.

Timo
New York designer Timo Weiland’s fanciful neckwear isn’t for retiring types. The oversize bibs in perforated leather and elaborately ruffled satin collars that drape around the neck are as extravagant as Elizabethan ruffs. About as far from a boring necktie as you can get, the inventive designs add an immediate splash of drama to any guy’s — or gal’s — outfit.

“I’ve been obsessed with neckwear since I was a boy. It’s so versatile and it allows you to easily change up your look,” said Weiland, 25, who studied business at Vanderbilt and worked in a training program at Deutsche Bank before turning his focus to fashion. He allows his more outré styles can veer toward the androgynous and are for those modern guys who don’t mind sharing the pieces with their best girlfriends.

The debut collection — which was feted with a swanky Interview magazine-sponsored bash at the Phillips de Pury auction house in November — includes 34 designs in seven silhouettes,  including some traditional four-in-hand ties and bow ties, albeit in paper-thin leather. The pieces will retail from $75 for a classic style up to $1,300 for special designs created in partnership with Weiland’s jewelry-making pals, Lizzie and Kathryn Fortunato.

S2VS
New York designer Sean William Salim boasts a peripatetic background: He was born in Indonesia, raised in Singapore, and then attended five different colleges in the U.S. before settling down at Parsons The New School for Design to study men’s wear design. After interning with Isaac Mizrahi and Tim Hamilton, he’s started his own label, called S2VS, which is a creative riff on his name.

The line is inspired by utilitarian themes, particularly the layered look of the industrial 1900s, which Salim thinks is quite appropriate for the current recessionary times. For fall, signature design elements include three-quarter-length sleeves on dress shirts, hoodies and henleys. “People always roll up their sleeves, so I thought I’d do it for them,” explained Salim.

Outerwear tends to be the line’s strongest sellers, with a wool, belted trenchcoat with epaulets retailing for about $800. Jeans retail for $150 to $200, T-shirts for $80 and knit sweaters for $200 to $300. S2VS is currently sold in about 14 doors, including Oak, Base and Blackbird. The line is sold out of New York’s Archetype Showroom.