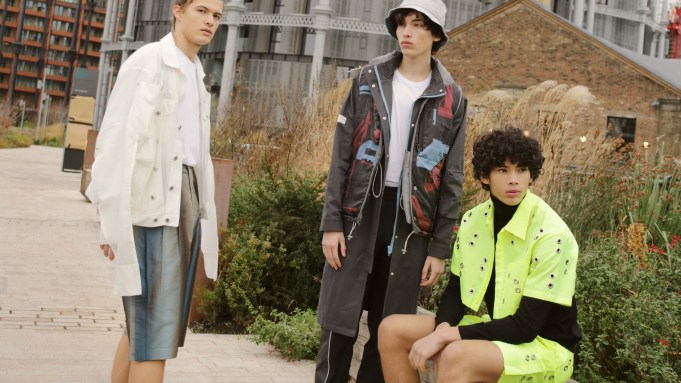 LONDON — Designers from around the world have been coming in waves to London Fashion Week Men’s and among the newest names on the calendar are Studio ALCH, C2H4 and Feng Chen Wang. But while they may be new to the London runways, they’ve already garnered international attention, having worked with brands such as Nike, Levi’s, Kappa and Converse.

The Australian designer Alexandra Hackett of Studio ALCH, who creates new garments from repurposed Nike pieces, said she’s come to London to be better integrated into the international market. “Australia is quite geographically removed, which is reflected in its industry. London is more of an internationally recognized city and you can create product that, perhaps, has more markets in different countries across the world,” she said.

Hackett caught Nike’s attention early on and the famous swoosh has become her brand’s trademark. The sportswear giant has also sponsored some of her designs. Hackett has snared celebrity fans such as Kendrick Lamar, who has worn Studio ALCH’s boiler suit made from reconstructed Nike bags, and British Grime rappers Stormzy and Skepta.

For her fall/winter 2019 collection, she took inspiration from “the sport of commuting” and the idea that people’s day-to-day lives reflect an urban track. She plans to combine workwear and sportswear and show off tailored and oversize tracksuits in a plethora of neon and fluorescent colors.

“These colors have a strong connection to the idea of sport, they evoke the idea of movement and visibility especially when you’re going for a nighttime run,” she said.

With regard to sportswear, Hackett believes the aesthetic will only continue to rise in popularity, because “the primary goals of sportswear are based on comfort and functionality.”

Yixi Chen of C2H4, also designs with functionality in mind.

The designer is known for her formulaic approach to streetwear, and her signature utilitarian jackets are often detailed with multiple pockets. Chen is moving to a see-now-buy-now business model and renaming her collections by case numbers rather than seasons.

“The industry is changing so fast and we don’t want to feel constrained or dictated by timing so we’re going to start this collection off with the name R000, the next will be R001 and so on. This means that we can produce one collection or three a year, whatever suits the brand,” she added.

While the brand was born in Los Angeles and originally christened C2H4 L.A., Chen decided to lop off the abbreviation to make the name more universal. “I don’t want people to think that the brand’s American or Chinese because it has influences from both sides, I want the brand to speak for itself,” she said, adding this was also the reason she chose London to show her collection.

“The vibe of London is something that I can identify with, and London is somewhere where everyone can express their artistic side more freely, whereas New York was much more commercial,” said Chen, who showed in New York for her first season.

Kappa picked up on Chen’s approach to streetwear and she ended up collaborating with the brand last year on a collection. Singer Billie Eilish has been seen sporting C2H4’s pieces at concerts, along with Kendrick Lamar and Joey Bada$$.

For Chen’s debut London collection, she’s bringing retro vibes to the stage. Named FM2030, the collection centers around a fictional character born in the 20th century and imagining life in the 21st. “I’ve taken inspirations from the Seventies and the Nineties and incorporated them into key pieces such as technical parkas, pullover jackets and vests,” Chen said.

Feng Chen Wang also turned to the past for inspiration for fall/winter. She looked at traditional Chinese artistic techniques, like brush painting, to inform her collection’s silhouette and color palette. “This season, I’m creating more mature designs with my signature sportswear aesthetic,” Wang said.

In her previous signature collections, Wang has often used bright pops of color, including oranges, pinks and reds, but for this season, she is reintroducing these familiar shades in warmer tones such as salmon orange and autumnal red. Also new to the season is a small capsule of tailored suits made from wool, which Wang hopes will provide interest and break up her signature sporty nylon jackets.

For Wang, London will be a homecoming. “I graduated from the Royal College of Art and I’ve lived in London for more than 10 years, so showing here felt natural to me. There’s also so much freedom for young designers to do whatever they want to do and for me, I just want to explain my story,” she said.

“They said they wanted to do more work with young brands, and we seemed to be the right fit for them, and I think our pieces can easily be worn by women. The patterns we work from are also suitable for the female body,” she said. While the brand is only three years old, Wang has been picked up by department stores Lane Crawford, I.T and Dover Street Market Beijing.

“If you look at men’s week in London four to five years ago, you had a lot of big brands. Because of the way the market has changed with a lot of brands showing in women’s wear and a huge emphasis on direct-to-consumer, that’s changed. But I don’t think the week has been diminished by it. I just think it’s full of younger designers. It allows them the oxygen of publicity. There’s so much diversity and genuine young talent, it just feels very exciting.”

Looking ahead, Jones said the British Fashion Council is hoping to weave in more cultural aspects to do with London into the week.