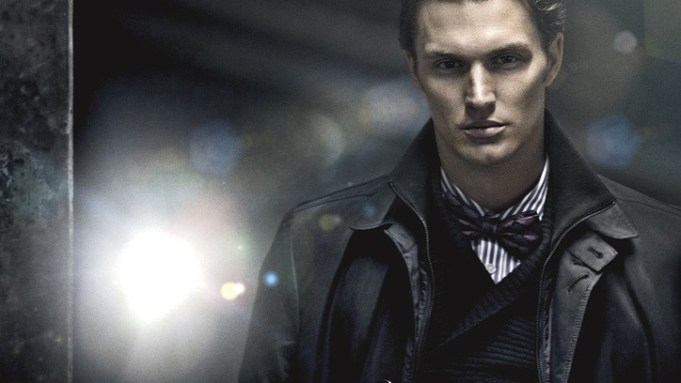 Consumers love a two-for-one, and ENK is hoping retailers will, too.

The market is about to get its first look at the consolidated Collective and Blue trade shows, which kick off this Sunday. The expos, held in adjacent piers  for many seasons, will both take place at Pier 94 this year, The Collective’s traditional home.

Although housed in the same space, Blue will remain autonomous within Pier 94 through distinct signage and design, according to ENENK. The show will be cordoned off within the south wing of the pier and will retain its minimal, single-aisle layout.

The 40 vendors exhibiting at Blue, two of which are highlighted here, include luxe classification players like Christopher Fischer, better denim companies like Hudson Jeans and established contemporary brands such as Converse by John Varvatos and Relwen.

The Collective, meanwhile, continues to expand its offering as the tastes of classic, luxury and contemporary consumers merge. In addition to denim stalwart  Earnest Sewn Co., venerable tailoring clothing resources like S. Cohen, and a host of high-end Italian vendors, the event will showcase new boutique specialists and a few dusty but distinguished brands that are using the show for a relaunch. Here, some of the notable newbies.

NEW AT THE COLLECTIVE

Harris Tweed
The nubby, hairy, color-flecked wool known as Harris Tweed is unlike any other in the world. The English Parliament ensures it.

A popular textile since Victorian times, the venerable fabric is regulated by the U.K. government, which dictates that it must be handwoven of pure virgin wool by the islanders of the Outer Hebrides, a chain of windswept islands off of Scotland’s northwest coast.

Despite its long heritage, the Harris Tweed industry was almost lost when the islands’ biggest mill was put up for sale a few years ago. In 2006, English textile entrepreneur Brian Haggas purchased the mill with the aim not only of saving the fabric, but also of fashioning the distinctive tweed into a global apparel brand.

This season marks the American launch of Harris Tweed’s first line of apparel, a range of four sport coats cut in the classic fabric. “Sadly, for many years the marketing of our [Harris Tweed] industry has been neglected,” Haggas said. “Everybody knows it and speaks well of it. It’s our plan to relaunch and reinvent it.”

For those whom Harris Tweed conjures up stodgy professors in stiff, scratchy jackets, Haggas said his mill has lightened and softened the fabric. “The name has all this romance; we just needed to update it.”

Matinique
The Eighties really are back.

Matinique, the Swedish brand that rang up north of $80 million in the U.S. during the Reagan era, is making a play for the American market once again with  a line of sleek and slim, moderately priced men’s apparel.

Already well-established in Europe, Matinique returned to the States with a soft launch last season. Now the brand, owned by IC Cos. AS, an apparel conglomerate based in Copenhagen, is making its Collective debut with a core line of mix-and-match tailored separates, clean denim and slim-fitting wovens.

“Things have gotten way too casual,” said Todd Katz of Kudo Group, Matinique’s distributor in the U.S. “Guys wear jeans and Chuck Taylors to events and think it’s okay. We think Matinique is going to ride a trend toward both affordable and more tailored clothing.”

Blazers, which will feature German wools and linen blends, start at $240. The updated range of denim begins at $90.

“We use a lot of classic patterns, like plaids or twills, but twist them through different colorations and a much leaner silhouette,” Katz said. “We’re not a premium brand. We’re about affordable fashion.”

Zachary Prell
Financier-cum-designer Zachary Prell came to apparel with a specific but lofty goal: to perfect the men’s woven shirt.

He said years of dressing up for work revealed the shortcomings of the button-fronts he wore: They were too long to wear untucked, the silhouette was too baggy and the button stance was awkward.

His line, a tidy selection of solid shirts that launched in 2006, offered a remedy. He moved the top button of the shirt down to avoid what he calls “man cleavage.” He widened the cuff to accommodate the vogue for large watches. And he shortened the body and slimmed the silhouette to satisfy his desire for a shirt “that fit athletic bodies and could be worn to work and after hours.”

Since then, the line has expanded to include patterned wovens, a range of pricier Italian shirtings, short- and long-sleeve polos and a collection of cuff links. At The Collective, Prell will show some 50 shirts, which will emphasize textured patterns, plaids and stripes in blues and browns.

“I consider men’s wear a challenge to improve not only the look but the function of everyday garments,” said Prell, who has sold his line to Nordstrom and Scoop. “Even if guys aren’t aware of their issues with their shirts, once they try ours on they will see and feel a difference.

Scott Kay
Scott Kay wants to do to men’s jewelry what Hublot did to timepieces: make them  big and luxurious.

The brand, well known in the women’s bridal market, launched its line of men’s jewelry last season with a focus on thick, heavy, highly wrought, masculine pieces based on intricate 17th century engravings. Think jewelry Charles I of England might wear.

The line, hand-carved in the U.S., has had early success and is already placed in 200 doors — gains that have prompted the brand to expand its business to independent retailers.

“This is a completely untapped category for specialty stores,” said Dan Scott, the company’s chief marketing officer. “They already have their big watch. Now they need our statement jewelry to match.”

At the brand’s first Collective, expect to find new two-toned pieces with inlays of 18k gold and onyx as well as the brand’s staples: chains and bracelets in woven precious metals and an emphasis on the cross motif.

Simple cuff links open at $250 while larger pieces with precious stones reach into the tens of thousands.

Alessandro Dell’Acqua
Welcome to the house that shoes built.

Alessandro Dell’Acqua’s decade-old men’s collection business got kicked into high gear four seasons ago when he launched a line of high-tops whose retro-
futuristic styling and high-gloss sheen won over both fashion’s faithful and sneaker heads.

“We started off with a classic line of footwear and it did fine, but the sneaker collection has become a global business for this brand,” said Andrea Cecconi, vice president of Ultramoda, which reps Dell’Acqua’s footwear collection in the U.S.

The shoes are making their New York trade show debut at Blue with updates to Dell’Acqua’s signature silvery kicks. Expect a greater mix of color and materials this season, in addition to his classic patent leather and metallic high tops, which start at $300 retail.

“We feel there’s still a lot of opportunity in the U.S. and not just within the contemporary market,” Cecconi said.

Commonwealth Utilities
Launching a fashion line is a little bit easier when you’ve got a hot creative agency behind it.

Commonwealth Utilities, which will be showing its sophomore collection at Blue,  is the brainchild of designer Anthony Keegan and Richard Christensen, the founder of Chandelier Creative, the hip marketing agency with clients like Givenchy and Old Navy. Those kinds of contacts help open doors for a fledgling brand, and having free creative input from the staff, whose ranks include Larenzo Martone, Marc Jacobs’ current beau, doesn’t hurt either.

Still, Commonwealth Utilities is about the design, according to Keegan, himself no slacker, with stints on the design staffs at Giorgio Armani, Donna Karan and  Versace. “Basically we want to dress up a dress-down nation,” he said of the collection’s attenuated evening suits, oversized bow ties and tuxedo shorts. “When we launched, we focused on basics, but now we want to address clothing that is a little more sexy with a bit of humor.”

An example of the latter: the giant oversized hooded puffer, a piece Keegan calls the antimedia jacket. “It’s big enough that you could hide from the paparazzi in it.”

Smart style for any celebrity, or even an aspiring one.