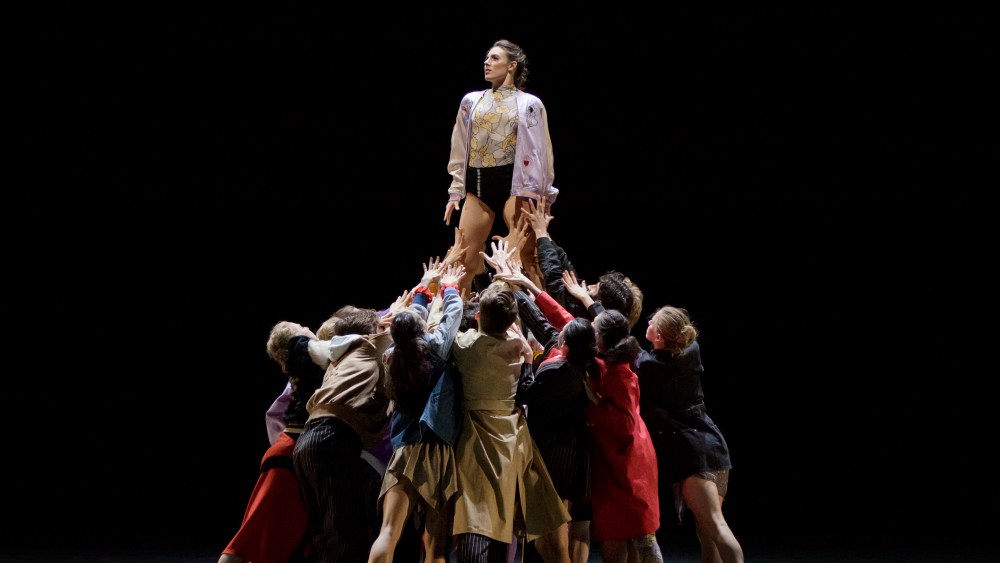 Opening Ceremony’s evening at the New York City Ballet, held Saturday at the David H. Koch Theater at Lincoln Center, was perhaps as poignant and engaging as a non-fashion fashion show could ever hope to be. Hitting the mark on several levels, it addressed a host of industry and broader political issues — see-now-buy-now, a creative show format, hope and fear in the Trump era — without forcing them.

In lieu of a standard fashion week fashion show, Opening Ceremony cofounders Humberto Leon and Carol Lim invited guests to a performance of “The Times Are Racing,” a new ballet by New York City Ballet’s resident choreographer Justin Peck for which Leon designed the costumes. They, in turn, inspired the spring 2017 Opening Ceremony collection. Set to music by composer and electronic musician Dan Deacon, the ballet is most untraditional, a fact underscored by the two pieces — “Fearful Symmetries” and “The Shimmering Asphalt,” both relatively classic in movement and their uniform costumes — that preceded it on the evening’s program.

Deacon’s score was the driving force behind “The Times Are Racing,” a story of American identity, and ultimately diversity, which premiered Thursday. It imagined strangers encountering each other on city streets. Peck’s contemporary choreography heightened the mood — the dancers wear tennis shoes not pointe shoes; and their feet are often flexed instead of pointed — but its Leon’s costumes that really drove the point of individuality home. No two dancers were dressed alike in what’s essentially modern day streetwear — jeans, T-shirts, cutoffs, graphic hoodies, overalls. “We went through every single dancer’s Instagram to see their style,” said Lim. “It was all about individuality. Normally a ballet is all about uniformity.” A key part of the look was shirts printed with action words: “Shout,” “Defy,” “Protest,” “Unite.” It’s a not-so-subtle rebuke of President Trump and his immigration policies.

“A lot of [the collection] developed the day after the election,” said Leon, who has been vocal about his anti-Trump stance, after the performance. “Justin was rehearsing, we had come to talk about the costumes and we were just in this other state. We knew this piece would open four days after the inauguration. It all made a lot of sense to us.” Lim pointed out that “Times” will forever be part of the New York City Ballet, so when it’s performed in 10 or 20 years and the opening date is announced, the audience can draw a line back to current events. No amount of choreography could have predicted that the Opening Ceremony event would fall on a day when protests erupted against Trump’s executive order banning entrance to the U.S. for refugees and citizens of seven Muslim majority nations, but it certainly made the ballet’s point all the more relevant.

Politics aside, the concept for the show spoke to many current issues in fashion. Lim and Leon, virtuosos of high-wattage creative collaborations, have never adhered to the cookie-cutter fashion show. They get away with it because their execution is at the level required to go rogue. In 2014, they put on a one-act play, written by Spike Jonze and Jonah Hill, on the stage of the Metropolitan Opera instead of a runway show. The ballet was derived from a similar mind-set — the need to present a brand vision in a thoughtful, creative way — though Saturday’s endeavor was even more progressive.

Also of note was the scheduling of the show, a full week and a half before New York Fashion Week. “During fashion week, especially if you’re in fashion, you’re dedicating your time to pound out a lot of things — it’s a week full of jobs you have to do,” said Leon. “There’s something really nice about extracting this because it’s such a different way to experience a show. Everyone here is calm.” Opening Ceremony will not be hosting another event or fashion show during New York Fashion Week. As Leon said, “This was our thing.”