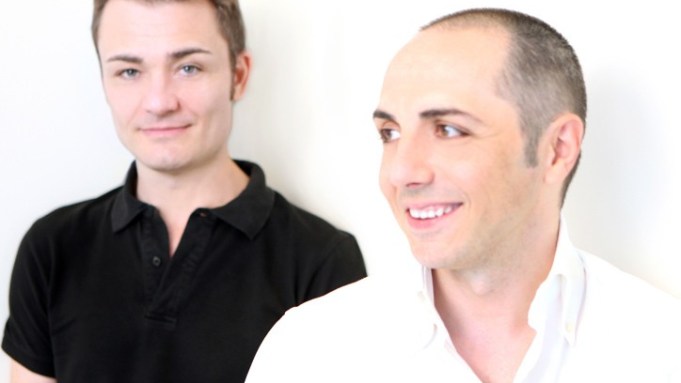 In many ways, Roberto Rimondi and Tommaso Aquilano of 6267 are as different as fire and ice, from their choice of breakfast beverages—Rimondi sips only tea while Aquilano is a coffee drinker—to the way they handle a last-minute, pre-catwalk crisis.

An hour before the duo’s show at the La Rotonda della Besana, a suitcase en route from India filled with 20 intricately embroidered pieces that were part of their lineup was still stuck in Italian Customs.

“You should have seen me—I was hysterical and I lost it completely, which rarely happens,” confesses Rimondi.

In contrast, Aquilano dubs the episode “a backstage adrenaline rush,” through which he remained unflappable.

But luckily for Rimondi’s nerves, a friend managed to wiggle the case out of Customs at the last minute so the models could slip into its contents—including a feathered sheath with beaded and beribboned applications, drop-shoulder dresses and cropped jackets bordered with elaborate geometric detailing and a floor-grazing, skinny coat with stripes formed by black beading and crystal.

Hysteria aside, the 6267 fall collection was a further testament that Rimondi and Aquilano have moved beyond the media darling phase, striking that much-coveted balance between buzz and commercial acclaim. The line is carried in 250 sales points worldwide and has grown an average of 30 percent a year. (They’ve clearly caught someone’s attention: The two were just named creative directors of Gianfranco Ferré.)

Rimondi and Aquilano, both born and raised in Italy, met at MaxMara in 1998. While they won’t comment on their personal lives, saying only that they work together, the pair is based in the small town of Mantova outside of Milan. Rimondi says he enjoys the “laid-back pace, where you can ride your bike to work and hens cackle in the courtyards.”

Founded in 2005, they named their label from the numbers assigned to Rimondi as a small boy at summer camp, and their business is entirely self-financed. “We reinvest every penny in the company,” explains Aquilano.

Ken Downing, senior vice president and fashion director at Neiman Marcus, adds, “6267 brought an entirely new vocabulary to Milan with the couture quality of its presentation.”

With their feet well planted in commercial territory and their heads floating in experimentation, the designers manage to be at once edgy—attracting top editors to their shows—and mainstream, with ubiquitous details as their hallmarks.

“When I see a $5 shirt in a mass market department, I’m flabbergasted because our zipper costs $14,” notes Rimondi.

When creating a storyboard for the new season, Rimondi describes the process as “putting a bunch of ideas into a blender.” For fall, the diverse ingredients include nods to artist Joseph Hoffman, the Romanoff jewels, Pierre Cardin, fabrics from the Sixties and Edgar Degas. “We believe in making the stores and the consumers aware of the workmanship that goes into each piece, and we go to great lengths to explain the collection in depth,” explains Aquilano.

The outcome is a restrained lineup, with each piece masterfully executed to display sharp shapes, whether cocoonlike or lean and clean. The subdued color palette revolves around black and white with spurts of blush pink, and a spate of checks, overchecks and windowpanes, cut on the bias. The inky prints have a tribal feel, different from the modern-edged details that include leather-trimmed collars and buttons, cap shoulders and stand-up collars.

“We like to offer a variety of looks so skirts will be short, midlength or long, not because we’re indecisive, but because we like the idea of dressing different women with the same philosophy,” says Aquilano while puffing on a Marlboro Red, his impish look determined by a loose gray T-shirt, jeans and a shaved head.

Quips Rimondi: “We’re not interested in being edgy for edgy’s sake, because in the end, we alternate fashion and reality. Our idea has been to sell a healthy product with an elevated fashion message that never overshadows its salability.”

In typical design-duo mode, the articulate and perky Rimondi balances the more reclusive and thoughtful Aquilano. But regardless of the degree of contradiction or accommodation, the underlying feeling that comes across between the two 36-year-olds is one of esteem and support. “Sure, we have our ups and downs,” says Rimondi, “but ultimately, if you trust someone, it’s all for the best and it doesn’t matter if I have two ideas more or less in a collection.”