Fashion is a world of extremes, this season with two of the dominant moods coming from opposites ends of the spectrum. 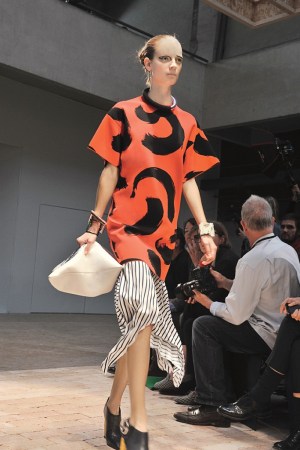 Fashion is a world of extremes, this season with two of the dominant moods coming from opposites ends of the spectrum.

On one hand, there was minimalism—its crisp, clean, purist parameters defined collections by Jason Wu, Proenza Schouler, Narciso Rodriguez and J.W. Anderson. Rodriguez’s aesthetic has always been one of linear precision, which he’s rendered with a lightness and modernity that have made his collections snap the past few seasons. As for Wu, Anderson and Lazaro Hernandez and Jack McCollough of Proenza Schouler, they’ve dabbled in the minimal, drawing on references for spring that seemed to include Calvin Klein, Comme des Garçons and Phoebe Philo at Céline, respectively.

Speaking of Philo—she leads to the season’s counterpoint: the unabashedly maximal. Philo’s work at Céline has been considered a driving force in the resurgence of the minimal for several seasons strong, yet for spring, she defied her own credo, channeling tribal and artisinal concepts into brash colors, bold graffiti graphics and other surface adornments.

Philo was not alone in scaling up. Some of the season’s most memorable shows came from designers who chose to embrace exaggeration and flamboyance from completely different angles.

Like Philo, Francisco Costa is known as a master of the spare at Calvin Klein, the house that made minimalism famous. It was a surprise, then, that Costa marked a decade at Calvin by breaking code, branching out of the purist realm with tribal references, such as fringe and colorful snakeskin strips pieced together to make a coat. This daring experiment with splashy color and exotica came from today’s global reality. “I felt like this patchwork of cultures and ideas was relevant to emphasize globalization, exactly what we’re living,” said Costa. “Our world is so contradictory today. There’s so much happening. That’s what was behind that sort of unleashing of cultural references that one can’t ignore.”

In his fabulously complex swirl of Victorian decadence and modern sport, Marc Jacobs worked opulent riffs on officers’ jackets with lowrider board shorts and intricately embroidered gowns with everything—all the accessories—decorated to the extreme.

In Milan, Miuccia Prada celebrated a New Age power woman with an audacious collection that could be described as in-your-face. She commissioned portraits of women by six artists and used them as colorful, outsize motifs on dresses, coats and skirts that came printed, bejeweled, in color-blocking and fur intarsias. The lineup exemplified fearless overstatement yet was remarkably controlled.

There was nothing subtle about Fausto Puglisi’s jewel-encrusted biker jackets worn with evening gowns, which he filed under “Carolina Herrera meets Axl Rose.” Meanwhile, Olivier Rousteing continued to carry the torch for hyperluxed nostalgia at Balmain. His collection was a cartoonish send-up of early Nineties uberfashion before minimalism extinguished the excess—Chanel, Versace, Gaultier—in its proliferation of the big gold buttons, blown-up houndstooth and gingham, and winks at suiting à la Coco.

Then, from the iconoclastic imagination of Rei Kawakubo came a Comme des Garçons collection of twisted noncomformity. In other words, it was direct from the canon of Kawakubo. The mostly black collection could hardly be described as ready-to-wear—rather fantastic creations, many of which were suspended around the body in giant asymmetrical forms. “The only way to create something new was to start without the intention of making clothes,” Kawakubo said.

Maybe they weren’t “clothes,” but the collection was a big statement.