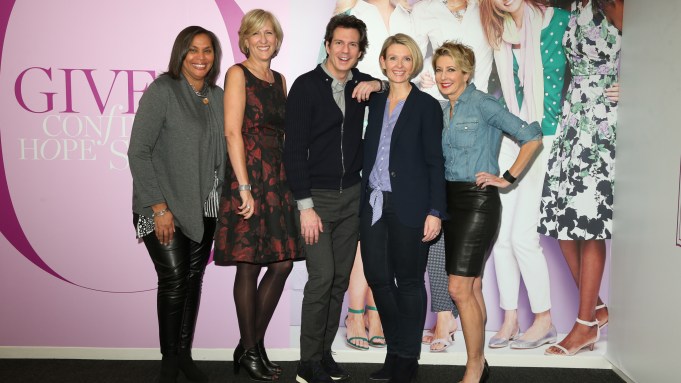 In what appears to be a new kind of triumvirate, Talbots and O, The Oprah Magazine have linked up for a limited-edition line that will benefit Dress for Success.

Building on their shared ethos of empowerment and giving, the three entities are unveiling a multiplatform initiative designed to encourage shoppers’ support in varying degrees. The O, The Oprah Magazine for Talbots limited-edition collection will be available in the specialty chain’s 500-plus stores, a site with 1.5 million followers and a catalogue. Designed in collaboration with the magazine’s creative director Adam Glassman, the seven-piece line features floral prints inspired by Winfrey’s gardens of roses and hydrangeas in her California home, as well as her wisteria-covered tea house. Thirty percent of all proceeds will benefit Dress for Success and any unsold merchandise will be given to the nonprofit after the six-week run.

During a preview last month at Talbots New York office, chief executive officer Lizanne Kindler said unveiling a national collaboration that highlighted the company’s legacy of giving back has been a priority since the first day she took over the role 18 months ago. As Alina Baikova passed by in $109 pajamalike drawstring pants and other styles, Glassman said Dress for Success has always been on O’s wish list for alliances. “Every season we send stuff indirectly to Dress for Success and Oprah has donated to Dress for Success. It felt like, as we say, “an a-ha moment.”

Consumers are being asked to clean out their closets, bring in gently worn clothes to Talbots stores for Dress for Success, spruce up their spring wardrobes by shopping the capsule collection, and give a monetary donation, or volunteer at the New York-based group, which helps 70,000 women return to the workforce. Geared for women of varying physiques, ages and ethnicities, the collection will retail from $60 for the Ombre Stripes Scarf to $189 for the Hydrangea-Print Fit & Flare Dress.

Working with Talbots’ head designer Leon Green, Glassman asked for such subtle details as a pencil skirt with grosgrain ribbon and a stretch lining to avoid the need for Spanx. Glassman explained, “Oprah always says, ‘God is in the details.’ I remember when she was doing one of her houses. It was like she knew every nail that was in the floor and every doorknob. I was like, ‘Do you need to know this? You are Oprah!’ And she was like, ‘Yes, God is in the details.'”

The collection hits stores and will be sold online from Feb. 22 through April 3 and monetary donations will be accepted in stores during that time, too. The Talbots catalogue highlighting the O collection will be sent to 4.5 million homes later this month. A Spring Style Shopping party will be held in Talbots stores March 5. Clothing donations will be accepted in Talbots stores March 3 to 6. O’s 12 million monthly readers will be the first to learn the back story about the partnership in features and the Be Your Own Modern Classic ads in the March issue.

That coupled with all of its social media platforms, as well as Glassman’s personal ones, should heighten the Oprah effect, according to O publisher Jayne Jamison. “The line is very democratic. Talbots has every size for every woman. It’s really important that we show real women in our pages, Adam does a really good job of that,” Jamison said. “I’m six-feet tall and this is a Talbots dress. I wanted to see something that I could wear.”

Glassman (whose ExtraTV red-carpet coverage has made him a familiar face with many) said he can’t wait to offer some dressing room assistance to help Talbots shoppers find what best suits them. One of his planned stops will be on Feb. 22 at Talbots yet-to-be-opened Manhasset store.

To illustrate O’s engagement level, Jamison noted how 600,000 women entered O’s Favorite Things contest in December and nearly 20,000 people have paid $200 for the magazine’s premium subscription rate. Jamison said an Oprah-lead college initiative aimed at Millennial women is in the works, with a campus event being planned for October in the D.C. area. In addition, O is producing a little magazine that will be distributed on college campuses nationwide at no charge, and digitally. She said, “There are plenty of people who want to tell you what to wear when you go for a job interview as a college graduate. But no one is really talking about the inspiration piece and that’s what Oprah obviously brings to the party — how to figure out your true passion, how to budget yourself. A lot of kids have taken on some pretty hefty college loans. How much should I really be paying for an apartment?”

Talbots will be the corporate honoree at Dress for Success’ April 7 gala at the Grand Hyatt in New York. Jay Z’s mother Gloria Carter, ceo of his Shawn Carter Foundation, will be the Toast to Our Mother honoree. Having raised $500,000 and collected 4,000 boxes of wear-to-work clothes donated by consumers for Dress for Success last year, Talbots expects to more than double that with this spring’s O-infused effort. The nonprofit’s ceo Joi Gordon expects 15,000 to 20,000 women to benefit from the initiative. Interestingly, Talbots was the first company to donate clothing to Dress for Success. The nonprofit’s ceo Joi Gordon said, “This was the one company that believed in us, when even we didn’t believe in ourselves. I don’t even know how they found out about us. To come full circle 19 years later with Talbots and O magazine choosing Dress for Success, it’s pretty powerful really.”