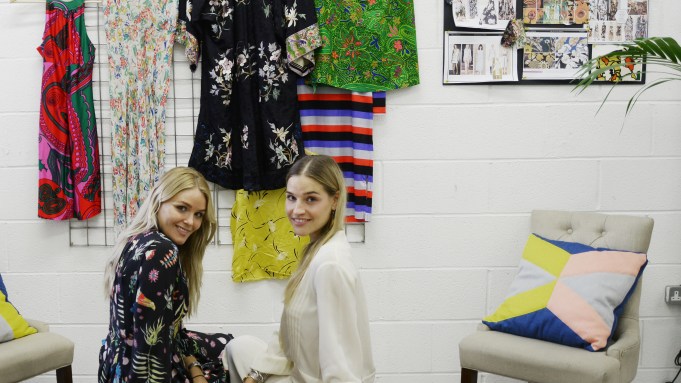 LONDON — Rixo founders and directors Orlagh McCloskey and Henrietta Rix are plotting the expansion of their British contemporary label Rixo. The brand is slated to launch in the U.S. at Saks Fifth Avenue on July 3 and in Le Bon Marché on July 7.

Introduced in 2015, the brand is known for its ladylike dresses, blouses and skirts done in handmade and vintage prints. The duo met while studying at the London College of Fashion and left their roles as buyers at T.K. Maxx and Asos, respectively, to start the company. Rixo is sold on the brand’s web site, on Net-a-porter.com and through wholesale accounts and pop-ups.

“We’re quite well-known in the U.K. and we want to get more of a presence globally,” said Rix, noting that the U.K., the U.S., Australia and Hong Kong are among their largest markets online.

Printed pieces have been among their biggest sellers and since then, the duo has focused on creating vivid patterns that are handmade in the studio. The Camellia dress, a floaty long-sleeve silk V-neck dress with blouson sleeves and slits at the side, is one of the top sellers.

“We don’t design in a way that we’re thinking about trends,” McCloskey said. “We design the things we love. I think we’ve got that element when we were buyers before, so we could understand the commerciality of where that will be worn.”

McCloskey and Rix said their experience as buyers gave them a foundation that helped the development of the brand. They said they focused on buying early on in the process and initially launched the range on their web site. They met with various editors and retailers and now, they host sales and press appointments in Paris.

“Design, price point and quality. If you can get every aspect, right then that’s almost like a winner piece. That’s what we are trying to do it for everything in the collection,” McCloskey said.

While samples are produced in the U.K. in their studio — and home — in West London, the designers work with a factory in China, which they say has helped their brand grow.

“If you’re a young brand and you get a supplier in China then it is a huge thing,” Rix said. “It is a really good relationship. That has been a key success so we can deliver to our buyers.”

Prices range from 175 pounds, or $225, for a blouse to 315 pounds, or $405, for a bias-cut dress. “I think the customer sees the value for money they are getting for a full-length dress in silk,” Rix said. “Very few brands are doing 100 percent silk dresses at that price point, so people do get shocked when they hear about our price points. That’s something we very believe in.”

The designers said the Rixo woman knows her own style, isn’t a slave to fashion and is not afraid of print or color. The collection, they say, is ageless.

“We don’t eliminate certain age groups,” McCloskey said. “All of our friends wear them in their 20s. We’ve had a grandmother getting two dresses for a wedding, and she is 75. We get pictures sent to us all the time from the customers and it is nice to see that it can land itself to different age groups. It’s just really about the attitude of the woman.”

McCloskey and Rix are searching for a bigger office in London — and a space that they can reside in as well. They plan to roll out accessories and handbags later this year.

The label will launch an exclusive cruise range with Net-a-porter in mid-October. “It will be a zodiac-inspired collection,” Rix said. “It is part of a capsule.”

Among their other initiatives include plans to open a brick-and-mortar store in London and stage a presentation in the British capital in the future.

“We would love to have a store in the future where we are offering a different experience,” Rix said. “So you can come into the store and there will be different vintage pieces every week and there is a big emphasis on the styling. We would really like to create a really nice place where we can have events and also we can build a community around the brand.”