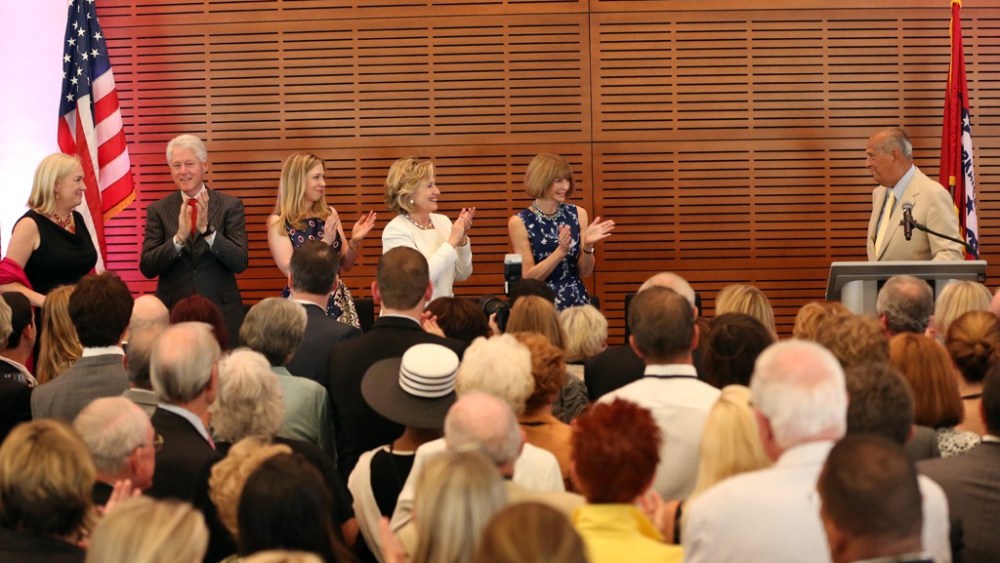 They heralded his friendship and philanthropy and needled him about his fiercely competitive card-playing to the nearly 400 people who had gathered at the glass-and-steel presidential library cantilevered over the Arkansas River. Guests included Barbara Walters, Alice Walton, Arkansas governor Mike Beebe and Oscar de la Renta executives and family members Alex and Eliza Bolen and their sons Philip and Thomas.

The exhibition was compiled at the request of Hillary Clinton, who became close to the designer after they met in 1993. The show of 30-plus mannequins, which closes Dec. 1, is the first retrospective of de la Renta’s 50-year career.

“I wanted to do this because for me, it’s not just about the clothes, although they are really spectacular,” Hillary Clinton told the crowd. “It’s about what that means — the continuing effort to really be as good as you can be; whether it is in designing and creating a dress or building a wall or teaching a child, it is about excellence. It is about high standards. It is about what we should hold ourselves to no matter what we do in our lives.”

Praising de la Renta for building an orphanage in the Dominican Republic, Bill Clinton called the designer “a truly dedicated friend” who “seems to become more ardent in his friendship when you’re down,”

and “an even more competitive card player than I am.

“I never got to wear one of his dresses,” the former president joked, “but I have every day for many years worn the mantle of his friendship with genuine pride.”

Following her father to the podium, Chelsea Clinton said it was incumbent on her to amend one aspect of his speech.

Like her own family, de la Renta is “always more interested in the future” than in the past, Chelsea Clinton noted.

“The present is only so interesting and inspiring because of what raw materials it provides us — whether those are ideas or the fabric of a dress — to create something new and innovative,” she said, adding she was grateful to the designer for his “commitment to ensuring that fashion is not only beautiful but also accessible, not only something that an ingenue can wear but something that any of us can take pleasure and pride in.”

Vogue editor in chief Anna Wintour deemed de la Renta “fashion’s renaissance man” and a designer who “truly understands the power of clothes,” urging the crowd to remember that “the reason [his fashions] are so gorgeous is that they are a perfect reflection of the man who made them.”

Noting that de la Renta has dressed many first ladies and that Hillary Clinton always looked “entirely appropriate” when she frequently wore his fashions as the most well-traveled secretary of state in history, Wintour earned the loudest applause of the evening when she declared, “I can only hope that all of you in Little Rock will be celebrating here come November 2016. All of us at Vogue look forward to putting on the cover the first female president of the United States.”

The exhibition was very difficult to produce, de la Renta explained to WWD after the program.

“This was actually Hillary’s idea,” he said. “Originally, I thought it was going to be about dresses I had done for first ladies or dresses I have done for Hillary, and they said, ‘No, no, no, this is going to be a retrospective of your work.’ Unfortunately, only in the last 12 years have we been keeping our archive of clothes because before that I never ever thought that anyone would ever have the slightest interest in my clothes.”

The exhibition traces de la Renta’s life from his native Dominican Republic, but most of the looks date from the past dozen years, including shimmering dresses worn by Chelsea Clinton, Jessica Chastain, Jennifer Garner, Anne Hathaway, Sarah Jessica Parker and Taylor Swift. Several displays are augmented by large reprints of photos from Vogue, including Hillary Clinton’s cover, which was the first time a first lady was featured on the magazine’s cover. It came about after de la Renta suggested the idea to Wintour and persuaded Clinton to do it.

A display of five first lady looks includes a reproduction of the burgundy velvet dress she wore for that portrait plus a tan coat and dress worn by Nancy Reagan in 1988, and a red suit from Laura Bush dating to 2008. The earliest piece in the show is a 1966 metallic green tunic and pants that came from the closet of Lynn Wyatt.

“I am unbelievably honored that they have become one of my closest friends,” de la Renta said of the Clintons. “We have spent a lot of time together, spent vacations together many, many times.”

It was during those visits that President Clinton taught de la Renta to play the card game Oh Hell.

“It’s a very competitive card game,” the designer explained. “President Clinton plays a thousand times better than any other one playing. What drives me insane is he can be looking at the television, the newspaper, and playing cards and he still plays far better than anyone else. This year in March we had a tournament and I won the first prize, but I still have my doubts. I think it was arranged because it was in my house.”