The designer sat down for a two-hour chat with Fern Mallis on Thursday night during which he detailed the more momentous events in his life. 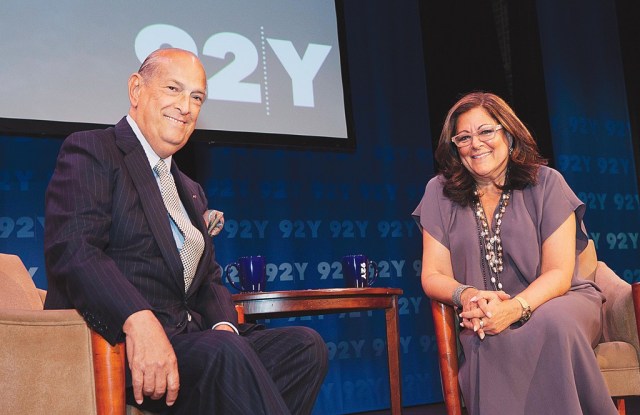 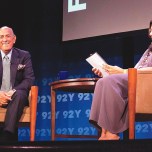 NEW YORK — A storyteller in the finest sense of the word, Oscar de la Renta detailed the more momentous events in his life Thursday night by telling not only what happened but also what he was thinking.

During a two-hour chat with Fern Mallis at 92Y here, the designer described spotting Rita Hayworth at a bullfight and anticipating which exit she would leave from; deftly feigning inexperience to land a job with Elizabeth Arden, and inflating a job offer so that Lanvin’s Antonio Castillo would not just match it but double it. Charming as ever in a gray pinstripe suit, de la Renta also mentioned how during her p.r. days Mary McFadden helped score him an interview at Christian Dior New York. He didn’t only talk about the past, however: De la Renta was more than willing to discuss his company’s succession plan, today’s top-shelf designers, his battle with cancer and hiring John Galliano.

With his 81st birthday about a month away, de la Renta made it clear to the sold-out crowd that he has a lot of fight left in him: “There is no loyalty anymore among the consumer. That makes our work so much more exciting, because never in the history of time has there been a woman more in control of her destiny than a woman today.”

The designer said of his team, “I am not a loner. I like to be surrounded by people. I like to be contradicted. I like to be challenged on a daily basis. I like to say that the day I say, ‘I have learned it all’ is the day that I should stop.”

Working for Cristóbal Balenciaga:
“I met him through a friend. I never went to fashion school. I had the great luck of observing a master work, go into the sample room and see how clothes are cut and made.”

Relocating to New York in 1963:
“At that time, the designer was the little guy in the back room. I have to give the credit to John Fairchild. He is the one who said, ‘I’m not interested in the manufacturer. I want to know who the guy is who makes that dress.’”

Upstaging Yves Saint Laurent & Co. at the Battle of Versailles in 1973:
“They thought they were going to make mincemeat pie out of us, and in fact they almost did. But I have to tell you the show was wonderful. We were so unbelievably unprepared. The French went first and you can imagine. Pierre Cardin had a Sputnik, and Yves Saint Laurent had a white Cadillac convertible…

“The only thing we could use was a little Eiffel Tower that was hanging.”

Having his son-in-law Alex Bolen head up the company and his stepdaughter Eliza run its $250 million licensing business:
“He’s the best. Let’s not talk numbers. For a long time, I have always worried about what will happen to the brand when I am no longer here, so I plan to be here for a very, very long time. But having my family involved in the business, now I know there is continuity. To be clear my only fear that I have every morning is ‘When are they going to fire me?’”

Selling the company:
“No, the business is certainly not for sale — no question — unless somebody comes with a huge big offer. A lot of companies are going public. I don’t think this is the way we want to go.”

Hiring John Galliano:
“I strongly feel, regardless of what he did, that everyone in life does deserve a second chance [applause], and I am happy that I was able to give John a second chance.…It would be a shame if the industry was deprived of such a talent.”

Fighting cancer:
“Right now I am totally clean. Because I had that warning, how long I am going to live I do not know, but I’m having a fantastic time every single day. I don’t think I ever, ever would have been able to go through what I went through without my family and my wife.”

The prospect of launching a mass line:
“Offers have come, but I’m not about gimmicks. I’m about dressing a woman [pause] who can afford to buy my clothes.”

First ladies:
“Michelle Obama makes a terrific First Lady. Would I like to dress her? I would like to dress every woman. She is not an elected official. This is the only country where the first lady does play a very important public role. I see that fact as lost opportunities. For a first lady, it is a learning process. I was upset [that] when the Chinese prime minister came for an official visit, she [Michelle Obama] wore a dress from a foreign designer [Alexander McQueen]. What a lost opportunity to promote an American industry. I am sure she didn’t do it on purpose. She was just not well-advised. She is a good-looking lady who could do tremendous help to make this very big industry grow more.”

Rules to live by:
“Love. Be curious. Always try to do your best.”