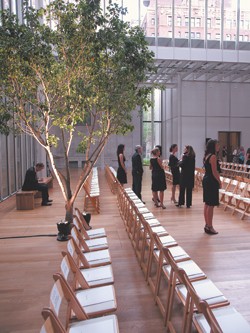 NEW YORK — Border control? Oscar de la Renta may not be about to call up the National Guard, but neither is he willing to surrender his hometown turf to the Euro set — notwithstanding one or two infamous dance turns with Karl Lagerfeld. Thus, for the showing of his resort collection on Monday, de la Renta rented the Morgan Library on Madison Avenue and staged something of an extravaganza of his own, a chic parade of a whopping 59 looks.

“Today, competition is not local but worldwide,” de la Renta said. “If Dior and Chanel do shows in New York … ” Actually, it was chief executive officer Alex Bolen who suggested the notion after last month’s high-profile visits by John Galliano and Lagerfeld. Designer and ceo then scouted locations, and chose the Morgan’s newly added Gilbert Court, of which they made fabulous use, including some dramatic staging. Despite the venue’s vast proportions, “backstage” options were limited and confined to the basement level, where de la Renta installed his dressing area. He then used the pair of big glass elevators to transport the girls back up to the main gallery for the show. “We turned a negative into a great positive,” he said.

The clothes made for a greater positive — a smart, savvy lineup to take a woman from beach to ballroom and everywhere in between. De la Renta went structured with safari looks and crisp, bow-back shifts, and soft with alluring little knits. One terrific idea gave strong graphics a girly spin, as in a white eyelet dress with bold black embroidery.

Like virtually every other designer, de la Renta stressed the swelling importance of resort, noting that it accounts for about half of his firm’s warm-weather business. Asked if he thinks it’s time to formalize the season, he responded with a hearty hear, hear. “There’s no question,” he insisted. “We need to establish a specific time when everybody shows. Our people from Neiman Marcus came in and told us, ‘This is our third trip to the city [for resort].’ From the point of view of expense, we need to formalize a week.”

Staging this show, for which the guest list was kept considerably tighter than for a typical spring or fall outing, has made him muse about those seasons as well. “When you go through the list of people who really need to be there, it’s probably viable to reduce the number by half,” he said. “Our wish is to do a civilized show [for spring]. From the point of view of buyers or press, when you’re in a space that’s inviting and you don’t have to fight your way to your seat, regardless of what you’re about to see, you’re likely to find it more appealing.”