With the nominations in for the 84th Academy Awards, the race to dress is officially on.

By Marcy Medina and Rachel Brown on January 25, 2012
View Slideshow 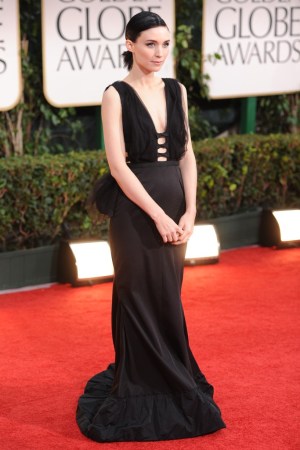 LOS ANGELES — The Academy of Motion Picture Arts and Sciences may have only released its Oscar nominations on Tuesday, but the fashion world has already chosen its favorites.

Stylists said the crop of new faces among the nominations gives designers a whole new group of young actresses to battle over for the red carpet. The four likely to be in most demand are Jessica Chastain, who was spotted front row at the Armani Privé couture show in Paris on Tuesday; Michelle Williams, who already won a Golden Globe; Rooney Mara, and Bérénice Bejo.

“I can promise you that these girls are already setting up who they want to wear to the Academy Awards,” said Jessica Paster, whose clients include Emily Blunt, Hilary Duff and Dakota Fanning.

With those actresses committing to designers, Paster added that the competition may heat up to dress presenters, especially if the likes of Cameron Diaz and the cast of “Bridesmaids,” which includes Rose Byrne, decide to present. Evaluating the fashion in the award season thus far, Paster expressed disappointment at top designers’ unwillingness to work with actresses who aren’t the youngest and the thinnest in Hollywood.

“I want to see some of the designers be more open-minded and not be so very vapid,” she said.

For the biggest celebrities, the trick is to be the first to nab exclusives with the designers of their choice.

“There are a lot of exclusives, so the list of go-to designers is becoming smaller and smaller,” said George Kotsiopoulos, co-host of the E network’s “Fashion Police.” “Even if you are a huge star and you call Versace or Valentino, they may tell you they already have an exclusive, so that already rules out those collections. It is getting a lot more difficult.”

As for what to expect among the presumptive biggest gets, Williams has the longest Oscar résumé. The actress first made a splash at the 2006 ceremony, as a best supporting actress nominee, with then fiancé and “Brokeback Mountain” co-star Heath Ledger. She has kept up her high marks since donning that year’s now-famous marigold Vera Wang gown. She favors Fifties party-dress silhouettes, be it Proenza Schouler, Dior or Marni, short shift dresses (all the better to channel Mia Farrow), and full-length bias sheaths in black and white. Chanel, Givenchy and Miu Miu tend to be her go-to designers, but this season she has shown range in Victoria Beckham and Jason Wu.

Chastain tends to accentuate her petite curves, porcelain skin and red hair with body-conscious styles and bright colors, and it’s clear the ingenue is relishing the opportunity to play dress up. “The clothes are a great part of this whole experience,” Chastain said recently at the Critics’ Choice Awards. “I’ve learned so much about fashion, it’s like going from zero to 100. I get to wear things I never dreamed I would ever wear.”

Since bursting onto the scene, Mara, who was handpicked by director David Fincher to star as Lisbeth Salander in “The Girl With the Dragon Tattoo,” has been on a red-carpet whirl for the film’s international premieres. Because she is still sporting her character’s black bangs for the sequel, Mara has wisely chosen to play into her dark, edgy style. With midriff cutouts, geometric shapes and a mostly monochrome palette, she has quickly developed a signature look that she’s unlikely to veer from come Oscars. Her Nina Ricci gown at the Golden Globes would have also been appropriate for the big day.

As for what to expect from Bejo, the actress named names at the British Academy of Film & Television Arts’ pre-Golden Globes tea party earlier this month. Elie Saab, the French actress said, is her favorite designer.

“I would wear him every time if I could,” she explained. “His dresses fit me perfectly, and my style.”

This year’s crop of final decisions and fought-over exclusives will be revealed Feb. 26, when the ceremony is broadcast on ABC — during Milan Fashion Week, as usual.

But while Kotsiopoulos hopes actresses will take risks at the Oscars, he doubts it will happen.

“If you want to sell yourself as a serious actress, it may not be the best idea to wear the craziest outfits to award shows,” he said. “I get why people play it safe. There is so much at stake now. People are selling themselves as brands.”