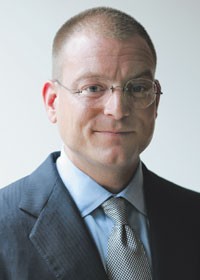 The office’s personal chef had to go.

That was one of the cost-cutting measures Alex Bolen brunted, after succeeding his wife’s stepfather, Oscar de la Renta, as president and chief executive officer of the designer’s company last summer. Like any savvy Wall Streeter — and Bolen was one for 14 years — he knows that business does not always allow for such perks.

“Things change. We really don’t have many private clients here any more. We run them through our stores or stores that carry our brand,” he explained.

The company does an estimated $100 million in apparel retail sales and $650 million more in licensed products a year, and Bolen’s aim is to triple the volume — with a domestic and international strategy — within three to five years. Last year, sales climbed 15 percent and this year, the company is on track to beat that, he said.

“Our competitors ask how we mine the DNA of our brand. We’ve got the DNA walking around the floor every day,” Bolen said.

The designer’s magnetism and charm are something to envy, and that is not lost on his 60 staffers. “We all work here because we love Oscar. He is the head designer, but there are a lot of talented people here,” Bolen said. “Oscar is so much the heart and soul of the business. Everyone shows up in the morning because they love Oscar.”

Under Bolen’s leadership, the brand is strengthening sales in its existing doors, opening freestanding stores, delivering more products early, playing up its sportswear business, bolstering its advertising campaign, planning for additional hires, boosting accessories sales and maintaining a healthy trunk show business of 100 annually. Not bad for a guy who “never had any intention of staying in the family business” when he agreed to help de la Renta find a replacement for Jeffry Aronsson, who exited as ceo in January 2003 to go to Marc Jacobs (he’s now at Donna Karan). But with some encouragement from his wife, Eliza Bolen, who is the company’s vice president of licensing, he was game.

Two years later, Bolen looks right at home in his office with its well-worn rug, cheerful artwork and somewhat disheveled stacks of paper. The charming man behind the label, the one Bolen first met 15-plus years ago when he was a Brown University undergrad, eased the transition.

“This is a family business, literally and, more importantly, figuratively. We’re very proud of the fact that so many people have been here forever. Some of the sample makers have been here as long as or longer than Oscar,” Bolen said. “The family feeling of this office is something that we have to keep.”

Niceties aside, Bolen said he is a big believer in giving people responsibilities and holding them accountable. “This business — in good ways and bad ways — has been managed like a lot of small businesses have, without a lot of structure and bureaucracy. I certainly don’t want to be bringing bureaucracy, but making people accountable for the numbers and goals is fine,” Bolen said.

The way he sees it, the company’s two cornerstones for growth involve building the wholesale business in the U.S. and expanding the brand internationally. The first initiative can be accomplished by increasing sales in existing doors, with Saks Fifth Avenue and Neiman Marcus “holding a very distinct opportunity,” Bolen said.

None of the designer’s three freestanding stores has been open for a year yet, but there are already plans to open more. A 2,100-square-foot unit in Manhasset, N.Y., is planned for next month, and Miami, Dallas, Chicago, San Francisco, Beverly Hills’ Rodeo Drive and South Coast Plaza in Costa Mesa, Calif., are among the locations being considered for additional stores. “South Coast Plaza makes the most sense in the near term. If we found a space, we would move quickly.”

Ultimately, the plan is to open stores overseas; Madrid, Moscow, Paris and London are likely locations.

The Madison Avenue store here, which opened in November, is already exceeding expectations. Initially, executives were hoping to generate $1,500 a square foot, but sales for the first six months are tracking at $2,500 a square foot, Bolen said. Moreover, the company has managed to have very little overlap with its shoppers at nearby Bergdorf Goodman and Saks Fifth Avenue. All the stores showcase all the designer’s offerings, like sportswear and accessories, which sometimes are eclipsed by his signature eveningwear looks at other retailers.

The designer is gaining fans for his bags, shoes, belts and sunglasses, Bolen said. The company would “very much like to add signature lingerie that would compete with the likes of La Perla,” he said. Bridal, something de la Renta does for select clients, is another opportunity, as is swimwear, which is offered in his resort and spring collections.

On another front, Lloyd & Co., the creative force behind the O Oscar de la Renta advertising, has been tapped to handle the ad campaign for the designer’s collection. Bolen has increased the fall media buy 40 percent, with the emphasis on fashion magazines. “In a business like ours, where image is incredibly important, print media is the most logical way to get our message out there,” he said. “It’s exciting, especially for a company our size that is competing with global enterprises that have huge marketing budgets.”

Bolen isn’t making the investment just to talk it up. He expects a financial reward. “I’m someone who is very interested in data. It’s my hope that with a 40 percent increase in our media buy, our sales will be up 40 percent. It probably won’t be that strong, but I hope the growth will continue and we will be able to invest more in advertising.”

In terms of production, a rigorous calendar has been implemented on all fronts. “In the past, everyone had known a week slip here or there was manageable,” Bolen said. “Now, it’s not.”