Oscar de la Renta exudes grace in his designs as well as his daily life, as his peers attest. 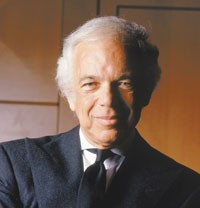 Ralph Lauren
“Oscar is the most elegant, charming man in fashion. He understands elegance in a way that’s timeless. His focus on ladylike style has had a great impact on the way women dress today — he’s allowed women the freedom to dress up again.”

Donna Karan
“I truly adore Oscar. He brings such elegance and passion to everything he does. He’s incredibly young and modern with amazing energy. Oscar and I share a long history. We’ve traveled the world together, including to Versailles in the Seventies and to Australia in the Eighties. Oscar and I are connected on so many levels that I think of him as family.”

Diane von Furstenberg
“Oscar is a most generous, wonderful man. For decades, he has been important in American fashion with his beautiful designs and, more important, creating a very aspirational lifestyle women relate to. I think that his son, Moises, is very talented, too, and will bring his label to another level for the younger generation.”

Behnaz Sarafpour
“He looks so fabulous, I thought he was 40. He must have started designing in the womb. He makes timeless feminine clothes, which I admire personally. He is of the school of thought where his agenda is about making women look beautiful.

“I met him for the first time at Mayor Bloomberg’s house for a dinner a year and a half ago. He came up and introduced himself, and told me my dresses were beautiful — I was tremendously flattered.”

Michael Kors
“Oscar manages to be unbelievably elegant, yet never stuffy. He has a great understanding of women and how they live, and I think he truly marvels in seeing a beautiful woman. His clothes have remained consistently feminine and luxurious for all these years.

“Taking the evening flight to Paris and having Oscar sit across the aisle from you makes a T-shirt-and-khakis kind of guy like myself feel terribly undone … considering that he can sleep in a white cashmere pullover and wake up looking perfect. Making it seem easy and gracious has always been his motto.”

Bryan Bradley, Tuleh
“Mr. de la Renta is a gentleman, and few designers are these days. Mr. [Yohji] Yamamoto once said, and I’m loosely paraphrasing, ‘Yes, it may be my time, but what’s more important is what a designer does when it’s not his time.'” Mr. de la Renta, always contemporary, is always Mr. de la Renta.”

Narciso Rodriguez
“Oscar is truly cool, one of my heroes always. It’s the kindness, incredible knowledge of the craft and dignity that I admire most in him. He is so loved and respected by so many and is definitely the most handsome and charismatic of couturiers. I once had the honor of speaking alongside him at a Sothebys lecture on ‘Latin American Women of Style.’ His knowledge and storytelling left me as awed and charmed as the audience was.

“One of the first projects I worked on while a student at Parsons was with Oscar. He impressed upon me that fashion was a joy, that women were to be made beautiful. And that red chiffon on pale skin was not so pretty. Later, I snuck into one of his shows and he busted me in the audience beforehand. He pinched my cheek, smiled and told me to enjoy the show.”

Zac Posen
“Oscar has kept glamour alive in fashion. He is committed to the idea of chic luxury. He’s brought joy, exuberance and sophistication to fashion. He really understands who his customer is and gives her the fashion that she loves. He enjoys life, and it shows in his designs.”

Patrick Robinson, Paco Rabanne
“I met Oscar about 10 years ago. The first thing I told him was that I wanted to dress like him. He is the most elegant man.”

Derek Lam
“Femininity, the bohemian feel and the emphasis on a woman dressing as a woman are things that Oscar has done from Day One. Oscar has always remained true to what he loves, and 40 years on, he’s at the top. What makes Oscar and Valentino, of all the Old World couturiers, the ones that really have transcended time? They both do things that women love.

“I saw Oscar and Annette de la Renta with Jayne Wrightsman at the last Costume Institute Ball. I couldn’t peel my eyes from them. Annette was wearing this beautiful cape by Oscar, a perfect half-inch above the ground. They were gliding through the room, and I was following them consciously. We passed each other and I gave them a big smile. Annette smiled back, which made my night.”