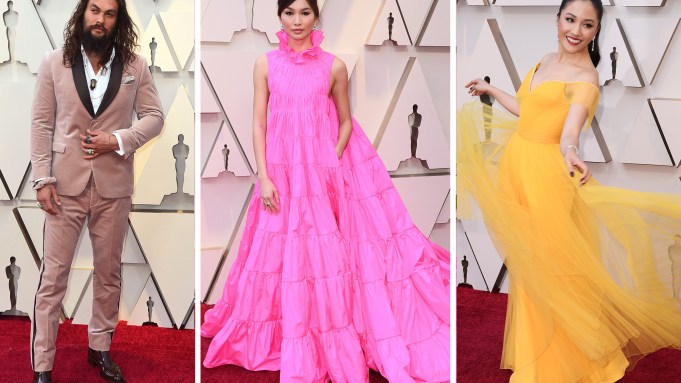 After the Academy announced the wrong Best Picture winner in 2016, it was hard to believe things could ever go so wrong again. Fast forward to 2019. The host got canceled, attempts to introduce a “popular film” category and shorten the broadcast both flopped, and everyone seemed to be offended. There was so much off-screen drama in the run-up to the red carpet that one A-list stylist said off the record that some clients were actually turning down six-figure fashion deals and staying home.

But the show must go on and it did — in living color, with stars putting on happy faces and some really good clothes. If early awards season looks for women were all about winter white, the Oscars was a vibrant Oz with a predominance of power pink and red. Even Aquaman joined in, with Jason Momoa proving that in 2019 real men wear blush velvet tuxedos. Silvia Venturini Fendi even made him a matching scrunchie for his long, luxurious locks, said stylist Jeanne Yang, who also dressed Lilakoi Moon (Lisa Bonet) in one of Karl Lagerfeld’s final designs for Fendi couture, a pink cage tulle dress embellished with beads and flowers.

Charlize Theron worked a more severe chic — a gray-blue Dior gown with long sleeves, pointed shoulders and open back, plus a fresh new brunette bob hairdo. Ditto Lady Gaga, who went about as old Hollywood as it gets in a strapless black Alexander McQueen gown with padded hip bodice, long black gloves and the jewel to outshine them all: a staggering 128-carat Tiffany yellow diamond necklace last worn by Audrey Hepburn. So there!

The news in men’s wear was not so much the peacocking of last year as a kinder, gentler elegance leaning toward the feminine. In an awards season where inclusiveness was the defining theme, the crowning example on Sunday’s red carpet was “Pose” star Billy Porter, who flew the flag for gender fluidity in a custom tuxedo ballgown by Christian Siriano that was a corseted jacket on top flowing into a black velvet skirt on the bottom. “It was an honor to create this empowering moment with Billy,” Siriano said. “It’s important right now for the world to see that anyone can dress the way they want.” Spike Lee also sent a political message in vivid violet, sporting the “Love” and “Hate” rings from his 1989 film “Do the Right Thing.”

Then there was Chadwick Boseman’s fully embroidered black and blue tail coat by Givenchy’s Clare Waight Keller, a custom style that was both traditional — it took four seamstresses 500 hours to make — and modern. “It felt so him,” said his stylist Ashley Weston of the regal rock star look. Unlike the rest of the awards season, she added, “It had understated drama.”