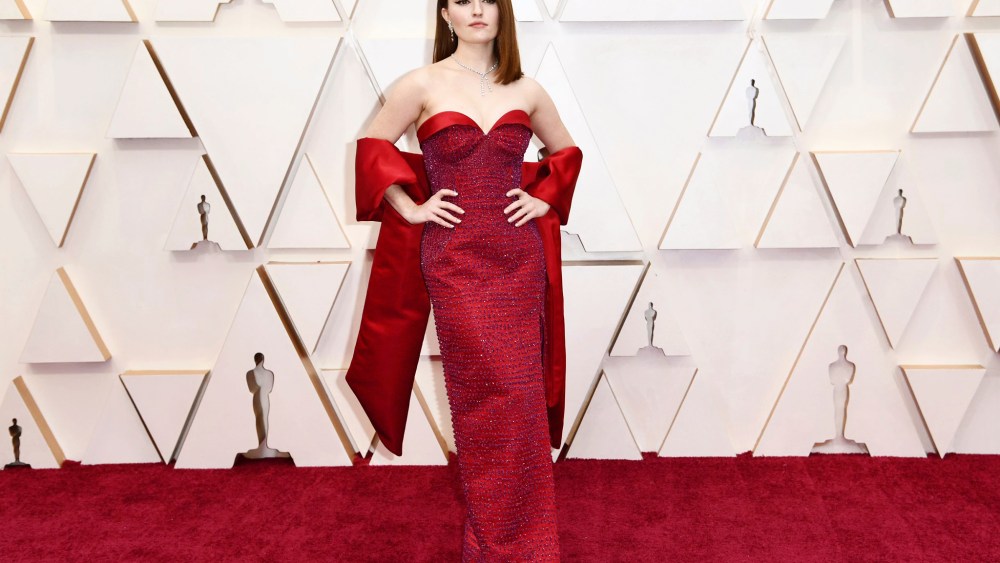 This will go down as the year the Oscars red carpet tried to go green. But what does green mean exactly?

Wear it once but make it compostable? As if Louis Vuitton would ever allow it. Nevertheless, the French fashion house went all in for sustainability on Sunday, creating two custom looks using eco-friendly materials (more on that in a minute), as luxury brands raced to use the Oscars’ global fashion platform to prove they are doing something to save the globe.

Kaitlyn Dever was a knockout in a custom red Louis Vuitton strapless gown and stole made of GOTS (Global Organic Textile Standard) Taroni silk-satin embroidered with red-blue beads at the Vermont Atelier in Paris, certified according to the Oeko-Tex Standard 100 and approved by the Red Carpet Green Dress organization. Who knows what all that gobbledy-greengook means exactly, but it sounds good coming from a brand whose parent LVMH has faced criticism for not signing the United Nations’ fashion industry charter for climate action.

“You realize you can amplify and alter behavior,” said Dever’s stylist Karla Welch of the awareness the gown could bring, which hopefully will translate to action. “We are showing a big brand can lead — and I hope they do.”

Louis Vuitton designer Nicolas Ghesquière has had a banner red-carpet season, no doubt about it. On Sunday, he also dressed Lea Seydoux using certified ivory silk, and a new wood fiber textile developed by Tencel Luxe that will hit the market this May.

See Also: All the Red Carpet Fashion From the 2020 Oscars

“When you think about it, it’s tragic, but it’s part of the human condition. We really wasted our planet in a way,” said Seydoux during a fitting at the Chateau Marmont earlier in the week, when the street was closed off so Oscars sponsor Cadillac could crane in a 2021 Escalade to sit poolside for a cocktail bash. “We have to rethink how we consume,” added the actress, set to reprise her role as Madeleine Swann in the upcoming Bond film, before asking for recommendations for Los Angeles vintage shops.

Climate catastrophe has been in the background all awards season: at January’s Golden Globes, Phoebe Waller-Bridge announced that she would auction off her custom Ralph & Russo suit to raise funds for the Australian bushfires, and Joaquin Phoenix teamed with Stella McCartney to wear one custom suit by the British designer to every film awards event of the season to counter fashion wastefulness. At the BAFTAs, a few stars responded to organizers’ sustainability drive, but the Oscars were the main event, Hollywood’s last dance between excess and activism.

Natalie Portman wore her activism on her sleeve, almost literally — embroidering the names of women snubbed in the Best Director category on her Dior cape to call attention to the need for more gender parity in the entertainment industry. And Spike Lee paid homage to the late Lakers giant Kobe Bryant with his purple-and-gold Gucci suit embroidered with the basketball legend’s number 24.

Harry and Meghan may not have hit the Oscars red carpet as had been rumored, but they might have influenced the prevailing fashion mood: modern regal. His highness Billy Porter set the tone. More gender-busting than bending, the “Pose” star arrived in a custom Giles Deacon gold leaf top and silk duchess ball skirt inspired by the gilded Cupola Room in Kensington Palace. Hollywood stars continued the classy procession of classics-with-a-twist, ballgowns, blush pink, capes, crowns and brilliant statement necklaces.

“I don’t know what sustainable fashion is yet,” confessed Ronan’s stylist Elizabeth Saltzman. “To me, it’s having clothes people wear for more than one minute.”

Nominated costume designer Arianne Phillips did just that, recycling her 2014 Oscars gown, as reimagined by pal Jeremy Scott and Moschino, for her RAD Red Carpet Advocacy Project. (Easy to do when you have designers on speed dial!)

“We don’t have any guidelines for sustainability — we have to consider standards, not just sustainability as a marketing term,” said Phillips, echoing the confusion around the topic. “But it’s not about being 100 percent. I believe everybody has to make an effort.”

Chanel’s big score of the night was Gucci girl Billie Eilish. The pop star made the iconic Chanel suit her own, wearing the house tweed with streetwear slouch, and enough brooches to spark a worldwide craze. But Margot Robbie’s vintage Chanel look, a 1994 couture gown with ribbon-tied armbands, echoed the night’s theme of reuse and rewear. (Again, easy to do when you have couture at your disposal!)

There were big fashion moments for American designers, too. After raising the roof at Ralph’s Club last New York Fashion Week, Janelle Monáe chose a custom Ralph Lauren draped hood gown that was sport-sleek, made of crystal silk lame tulle with 600 hours’ worth of hand embroidery and 168,000 Swarovski crystals. She looked like a stylish alien.

Oscar de la Renta designers Fernando Garcia and Laura Kim dressed double nominee Scarlett Johansson in a modern take on the corset gown — silver-screen-silver with edgy fringe detailing. And Jason Wu managed to outfit Rebel Wilson as a golden goddess at the same time his New York fashion show was going off on the other coast.

Speaking of the Oscars versus New York Fashion Week, it was somewhat surprising Tom Ford didn’t dress a female nominee after moving his runway to L.A. to coincide with Hollywood’s big weekend. Oh well, you can’t win ’em all.

Inside the Charles Finch and Chanel Pre-Oscars Dinner in L.A.

The L.A. Times Wants You to Try on Some Famous Oscars Dresses