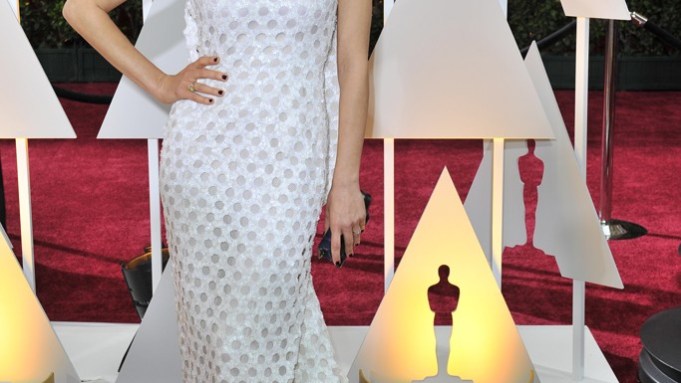 While it’s a given that fashion houses get their moment to shine at the Academy Awards when reporters shout “Who are you wearing?” this year designers themselves got their due from the stars, at least those major enough to be on a first name basis with them. “John’s a genius,” said Cate Blanchett of her Galliano-designed gown for Maison Margiela. “Karl made it for me,” said Julianne Moore modestly of her Chanel Haute Couture sheath, which took 27 people and 987 hours to complete. Felicity Jones duly called out Sarah Burton for creating her custom Alexander McQueen. “We started discussing this a few weeks ago. The detail and the craftsmanship is just incredible, and they somehow managed to get it all finished in time. It was really important for me to wear an English designer,” said the actress, who up until Sunday had worn mostly Dior. “I wanted to save the best for last.” “Elie Saab made this,” said Jennifer Lopez of her demure — for her — dress. “When I saw it, I just had to wear it.”

The silhouettes, as usual, were divided into two camps: princess and body-conscious, but at least each actress seemed to own her look this year: Sienna Miller chose a navy macramé gown from Peter Copping’s debut at Oscar de la Renta; Dakota Johnson, who walked down the red carpet with mother Melanie Griffith, chose a red-hot number from Saint Laurent; Marion Cotillard was a stunner in off-white Dior Haute Couture; and Reese Witherspoon, fresh off an appearance at his show Friday night, went with custom Tom Ford. “I’m just loving this,” said voluptuous new mom Zoe Saldana, wearing Atelier Versace. “We called and had this custom made because Versace’s dressed several new moms, and they just said, ‘Send  us your measurements.’ They made two dresses for me in two colors, to see what I felt most comfortable in, and this blush color just blew us away. I said, ‘OK, I can do this. I feel good.’” Naomi Watts, also in the column camp, said her Armani Privé wasn’t in the designer’s last show. “Mr. Armani chose not to use it, which clearly was the best thing for me, because I love it. They made a couple of changes, and I saw it for the first time a week ago,” she said. There’s always one or two actresses who choose laid-back comfort over constraint (think back to Cameron Diaz in a blouson Emanuel Ungaro and Tilda Swinton in shiny black Lanvin a few years ago) and this year it was Australian starlet Margot Robbie, in custom Saint Laurent. “It’s comfortable, whereas most Oscar dresses are not,” she said. Perhaps the only thing raining on her parade was, well, the rain. “Oh God!” she yelped as a huge droplet slid off the edge of the plastic tent and landed on her shoulder. “That’s the only thing about sleeves — they get wet.”