Honoring Jenni Kayne and Joie, the 34th annual gala showcased designs by students who were mentored by Uniqlo, Lucky Brand, Bob Mackie and other fashion labels. 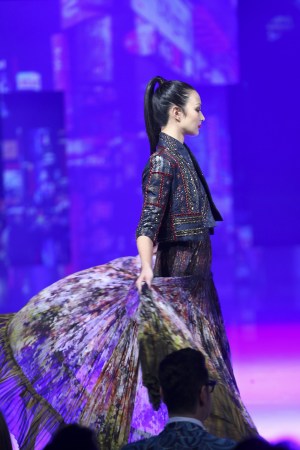 If beauty is in the eye of the beholder, then Otis College of Art and Design requested guests at its annual gala on Saturday night to reset their ideals of beauty with laser-cut Neoprene, denim, hemp, macramé and other inspirations that shaped the fashion designs from the junior and senior classes.

Projecting a theme titled “Regarding Beauty,” the Los Angeles-based university honored Joie with the Design Innovation Award and recognized Jenni Kayne with the Style Icon Award in front of 750 guests at the Beverly Hilton Hotel. While Joie has filled half of its design team with Otis graduates, Kayne’s ties to the school stretched back to her childhood, when her mother used to bring her to its galas, and then to her years as one of its fashion design students. “Never did I think I would stand here tonight,” she said to a crowd that included Cameron Silver, Lynne Koplin and Lucky Brand chief creative officer Kin Ying Lee.

The 34th edition of the annual event has improved dramatically since its debut at the Hard Rock Cafe, where the models posed atop tables. It also was a deserving send-off for Rosemary Brantley, who was departing as the chair of the fashion department after a 35-yearlong tenure. Between morsels of celery root and apple slaw, roast chicken and raspberry cheesecake, swimwear veteran Rod Beattie and interior designer Kenn Gray were among the alumni who shared their anecdotes about how Brantley helped launch their careers. Bob Mackie, who’s worked with Otis as a design mentor for years, said “this is Rose Night at the Hilton.” Humbled by the tributes from her students whom she has dubbed “Rosemary’s babies,” Brantley said, “I have been merely the leader of a remarkable orchestra for years.”

Using sewing machines and scissors as their instruments, this year’s orchestra of Otis students explored how creative they could get under the direction of professional designer mentors who specialize in swim, activewear, denim, sportswear and evening gowns.

In the junior class, Amuse Society’s Mandy Robinson Frye urged her students to design swimwear inspired by a rock muse on a beach holiday with laser-cut Neoprene. Blu Pony Vintage’s call for a fall collection of children’s dresses and coats yielded Empire-waist coats, muffs and bouncy dresses washed in muddied neutral hues. Lucky Brand’s class integrated found objects inspired by India in a Boho grouping of dresses that either grazed the ankles or skimmed the thighs. Nanette Lepore turned to Cuba as the inspiration for swimwear accented with macramé and beading. Moreover, Uniqlo directed its class to make functional classics, including bombers and windbreakers, for the whole family, and Michi led a project for activewear that blended optimal performance with downtown cool.

In the senior class, J Brand’s Angie Furlong guided students to cutting denim into double-breasted car coats, vests, tuxedo pants and a white jumpsuit with draped lapels. The student prize for that class went to Phoenix Wilde, who tailored wide-leg pants that matched a polished blazer. For Prairie Underground’s class, hemp was the material of choice for looks that mixed non-traditional tailoring and unusual proportions; the standout ensemble comprised cream culottes and a wrap jacket by Michelle Lee. Joie had the idea of mixing prints and textures for dresses inspired by Tokyo’s nightlife; the winner was Sadaf Foroutani Yazdi, who paired a bolero jacket with a deep-cut maxidress. Michael Maccari from Perry Ellis oversaw the designs of highly functional men’s wear, including a car coat with a contrasting side stripe, leggings layered under shorts and Michelle Kim’s winning style of an oversized military parka and skinny black pants.

Todd Oldham partnered with the Los Angeles Metro system to motivate seniors to produce day-to-night multipurpose clothing that could be worn for biking. Claire Kim won Oldham’s challenge with a three-quarter-sleeve jacket and sequined circle skirt. The finale was Bob Mackie’s eveningwear class, which based its work on Henri de Toulouse-Lautrec’s posters for Moulin Rouge. Students used pops of yellow, green and red with feathers, fringe and sequins for their sheaths, capes and gowns with trains. By incorporating a print of Toulouse-Lautrec’s portrait of Aristide Bruant in a red scarf in her floor-length skirt, bustier and black weblike coat, Katherine Strait took home the prize for the class as well as the school’s top honor as student designer of the year.