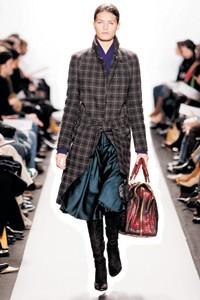 Financial instability and potential buyouts didn’t seem to affect a few of the top-ranked outerwear labels in this year’s survey. London Fog still topped the 2006 outerwear list, despite its voluntary Chapter 11 bankruptcy filing in March. Eddie Bauer finished third, even though the company is on the block. Consumers seem to know the names regardless of their financial standing.

That’s not by chance, considering how frequently Eddie Bauer, like its competitors L.L. Bean and Lands’ End — ranked second and fourth, respectively — shower shoppers with their catalogues. Feeling the pinch from magachains, such as Target, H&M and Wal-Mart, that are offering more outerwear, and often for sharper prices, tried-and-true outerwear labels are trying to find their places in an increasingly crowded field.

That requires some strategic thinking, as evidenced by London Fog. Unable to secure sufficient financing for day-to-day operations, the rainwear and outerwear manufacturer saw Chapter 11 as the best route to restructure its business. The 84-year-old brand has been down this road before, having filed another voluntary bankruptcy petition in 1999; it emerged in 2001. Last year, The London Fog Group had sales of $296 million, including a home furnishings category and performance outerwear under different labels. Last month, Perry Ellis agreed to buy London Fog’s Pacific Trail outerwear brand, but then learned that London Fog needed to file for Chapter 11 bankruptcy court protection. London Fog filed in Las Vegas on March 21, and Perry Ellis became the “stalking horse” in the bankruptcy court auction for Pacific Trail. Its $14.5 million offer was subsequently bested by Columbia Sportswear Co., which won the bidding at $20.4 million. To drum up interest in its signature line, London Fog is going upscale with pricier, more stylish looks.

Second-ranked L.L. Bean also has been on the move to update its classic styles and expand retail. The Freeport, Maine-based online, mail-order and traditional retailer will open three stores — in Burlington, Mass., in September; Center Valley near Allentown, Pa., in October, and South Windsor, Conn., in summer 2007. Locations in greater Boston are being sought for 2007 and 2008 openings.

At number three, Eddie Bauer is on a fast track to be sold. The specialty retailer has hired Goldman Sachs as financial adviser to help it explore options for a sale. In January, WWD reported that several strategic and financial firms were looking to buy the retailer. Wall Street analysts have said the outdoor specialist is ripe for sale. VF Corp., whose outdoor-apparel brands include The North Face, JanSport, EastPak and Vans, has been singled out as a potential buyer, according to published reports.

Fourth-place Lands’ End also has built a loyal following among outdoor buffs. Suiting up sailors was the brand’s initial mission, and it still offers performance-heavy outerwear. Jackets are a key element, but the company has an even wider reach with additional catalogues — Lands’ End Women, Women’s Plus, Men, Kids, School, Home and Business Outfitters (for corporate sales).

Fifth-ranked Columbia and sixth-place Nautica switched spots from last year’s survey. Columbia chairman Gert Boyle’s autobiography, “One Tough Mother,” helped boost the Oregon-based brand’s image. Through her many special appearances, Boyle discussed escaping the Nazis, saving Columbia Sportswear after her husband died unexpectedly and succeeding in an industry dominated by men, leaving guests with a very human view of the brand’s elder stateswoman. In terms of product, jackets, especially those for skiers, snowboarders and mountaineers, remain the driving force behind the $1.2 billion company.

Nautica has renewed its outerwear roots by mixing more jackets and lightweight coats into its sportswear. Not just for the sea-faring set, Nautica aims to dress more city dwellers out to refresh their wardrobes.

This article appeared in The WWD 100, a special annual supplement to WWD available to subscribers.