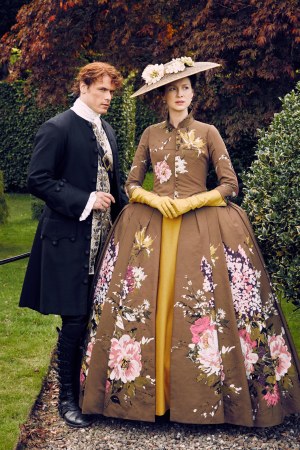 Sawed-off mannequin breasts, dresses too big to fit inside trailers, 1940s Balenciaga inspirations — season two of the Starz cult hit “Outlander” has, in all ways, upped the ante. When the time-traveling drama returns to the network on Saturday, audiences who have been waiting since 2014 will be in for even more opulence: lead characters Claire and Jamie take 18th-century Paris. “Every would-be blank space has some gold hoo-hah on the wall,” says the show’s costume designer, Terry Dresbach. “They’re not known for minimalist.”

Season two, from the drama itself to the costumes, is “bigger in every conceivable way,” says Dresbach, who previously won an Emmy for her work on the 2003 HBO series “Carnivàle.” “Caitriona [Balfe, who plays Claire] and the other actresses could no longer get dressed in their trailers because they couldn’t fit through the doors. In 18th-century buildings, the doors weren’t really wide — and we didn’t make the dresses as wide as they actually would have been. Jamie [played by Sam Heughan] would’ve been standing 12 feet away from Claire and they would’ve been waving at each other.” Makeshift dressing rooms were installed in several of the period buildings they shot in.

Dresbach and her team created over 10,000 garments for the second season, outfitting extras and main characters alike, including multiple costume changes for single characters. “In season one, Claire has about six to eight changes in her costume,” she says. “In season two, she has, like, 25.” And it wasn’t as if these pieces were quick to throw together: “[Creating] one of Claire’s dresses takes about a month,” Dresbach says. “So we had to figure out how to mass-produce the 18th century.”

Such a challenge was what attracted her to “Outlander,” Dresbach says. “One of the reasons for taking the show for me was the opportunity to do 18th-century Paris,” Dresbach says. “But then it was like, ‘Oh my god I have to do 18th-century Paris.’” While season one was about dressing in raw wools for the Scottish elements, season two has Claire and Jamie in the “highly embellished and decorated” fabrics of France. “We wanted Claire and Jamie to look comfortable in the French court, but not part of the French court,” Dresbach says. “Jamie is very clean and masculine and simple, and for Claire it was really important for us to retain that Forties modern clean look that we had established for her before.”

The Forties inspirations were drawn from a range of European designers, including Balenciaga, Dior and Valentino. “Anybody who knows fashion can draw direct lines from Claire’s costumes to fashion of the Forties,” Dresbach says. “That’s the period Claire came from, and all of those incredible designers from 1946, 1947, they all came out of World War II, and so did Claire. We wanted to create that sensibility for the show.”

The costumes got some face time with fans, as they adorn the windows of Saks Fifth Avenue in the retailer’s New York and Los Angeles flagships from March 22 through Monday. “Being five floors above street level in Saks for a week, sawing the limbs and breasts off of mannequins, and adjusting mannequins to 18th-century bodies was really an experience of a lifetime,” Dresbach says of the mannequins they brought in from Scotland. “All of our costumes are made for corseted bodies, which really flatten the body. Even without the skinny mannequins of today, it just doesn’t work. So we literally sawed the breasts off of the mannequins — which is kind of creepy and weird to do.”