Sean John Clothing and Zac Posen are expected to announce they are forming a joint venture to become equal partners in Posen’s business. 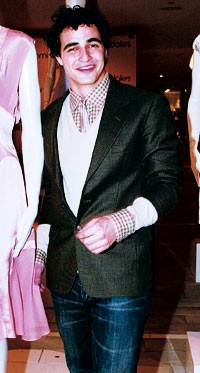 NEW YORK — In an unlikely pairing of interests, Sean John Clothing Inc. and designer Zac Posen are expected to announce today that they are forming a joint venture in which Sean John will become an equal partner in Posen’s three-year-old business.

Details of the deal could not be learned at press time, but sources said executives from both companies were signing an agreement late Monday.

This story first appeared in the April 20, 2004 issue of WWD. Subscribe Today.

Sean John designer Sean “P. Diddy” Combs has made clear his ambitions to become a major force in the apparel industry ever since he swaggered onto the fashion map six years ago, creating a streetwear brand that quickly transcended the boundaries of urban retailing to become one with designer panache, complete with a succession of over-the-top runway shows. Last fall, Combs signed a deal with Los Angeles billionaire Ron Burkle, managing partner of private equity firm The Yucaipa Cos., for an estimated $100 million investment to fuel Sean John’s retail expansion. Some also saw the deal as potentially reflective of a plan to expand through acquisitions.

In this case, it appears that Combs is teaming up with a designer prodigy whom he has admired since Posen debuted on the scene in 2001. Sean John is expected to make a long-term investment in the growth of the Zac Posen label through the younger designer’s holding company, Outspoke LLC, which is based in TriBeCa here. The companies will remain equal partners, with Posen retaining creative autonomy while using Sean John’s capital and infrastructure to grow his business and expand into other categories.

Given his age, 23, Posen might seem an unlikely acquisition target, but sources said he has been actively pursued by other potential investors. Posen wasn’t willing to strike a deal that would cede control of his signature company, however, and has managed to continue to grow strongly and maintain an impressively staffed studio through family investments. His mother, Susan Posen, and sister, Alexandra Posen, both are seriously involved in the business.

Since its debut, Posen’s collection has grown considerably in its retail presence and is carried at Barneys New York, Bergdorf Goodman, Bloomingdale’s, Bagutta and Jeffrey New York in Manhattan alone, plus in Neiman Marcus and Saks Fifth Avenue stores around the country and in specialty stores in nine other countries. His trunk shows have been strong nationwide, with recent events at Neiman Marcus in Los Angeles and Dallas garnering more than $100,000 each within a couple of hours.

Raised in New York and the son of artist parents, Posen has developed a following among the city’s society set, first luring high school classmates Stella Schnabel and Paz de la Huerta as his muses and eventually becoming a regular stop on the catwalk circuit for Claire Danes, Natalie Portman and Lauren and Barbara Bush, plus the gregarious Combs, who has mixed the soundtrack to some of Posen’s shows.

The two designers have become friendly, but had previously denied they were in talks about a business deal. Posen’s office did not return calls on Monday, while officials at outside agencies representing the designers both declined to comment.

Although Combs has insinuated he would like to someday build a fashion empire, he has thus far concentrated on his own brand. Sean John already generates some $325 million in retail sales through its various product categories and is on target for rapid growth in the coming years with the rollout of freestanding stores.

In addition to its plans to open a Fifth Avenue store across from the New York Public Library this summer, Sean John last month signed leases for 3,500-square-foot stores at Beverly Center in Los Angeles and the Garden State Plaza in Paramus, N.J., and other deals are pending for locations in Las Vegas, Houston, Hawaii and San Francisco.

Its strategy is to open similarly sized stores in high-profile, A-list shopping centers and downtown shopping districts. Ultimately, there could be 200 to 300 Sean John stores, company executives have said.

The brand’s potential in the women’s wear market remains largely untapped with the exception of a few samples created for the runway, with Combs repeatedly promising he’ll be debuting a full sister collection to his men’s wear soon. He last projected that an exclusive launch of limited-edition women’s wear would take place this summer.

“I’m trying to figure out the right retail strategy,” Combs said in an interview last year. “I don’t want to just roll it out. There are some things about the women’s business I’m still trying to figure out. I have the design and the infrastructure, but I’m still compiling the exact campaigns, marketing and sales plan.”

Sean John, which started as a small line of T-shirts and jeans, is one of several holdings under the hip-hop star’s extensive media and music empire. The collection is now sold in 2,400 doors, including Federated Department Stores and May Department Stores, and is the second best-selling men’s brand at many Bloomingdale’s doors, just behind the Polo brand.