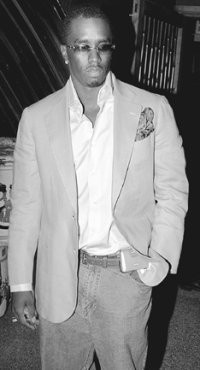 WWD has learned that Combs has signed a deal with California billionaire Ron Burkle, managing partner of The Yucaipa Cos., a private equity firm based in Los Angeles. Industry sources say Burkle has invested about $100 million in the $325 million-at-retail Sean John brand and has agreed to become a partner in the rapid growth of the label. Combs will remain at the helm of the company as chairman and chief executive officer. Further terms of the new partnership, including Burkle’s stake in Sean John, were not disclosed.partnership, including Burkle’s stake in Sean John, were not disclosed.

The deal represents a major fashion step forward for Combs, who becomes the first owner of a major hip-hop-inspired label to receive backing from a large investor. It’s aimed at turning Sean John into a global billion-dollar brand.

“This is an excellent investment opportunity, and we are proud to be aligned with Sean John,” Burkle said in a statement. “Sean’s vision and leadership are evident in the success of this extraordinary young company. The combined core competencies of Sean John and Yucaipa will allow us to rapidly capitalize on Sean John’s leadership position in the dynamic industry.”

While the Sean John brand currently includes only men’s and boys’ sportswear and accessories, Combs has promised to launch a line of limited-edition women’s wear next summer. It’s a vow he’s made in the past, especially since he featured eight looks on his runway in February.

But that’s not all he is promising. In the release, Combs said that, with Burkle’s investment, he plans to grow his five-year-old company to sales of $1 billion through an extensive retail rollout, which will start with the opening next spring of his first store at Fifth Avenue and 41st Street, the opening of international businesses and an expansion of his men’s sportswear collection. In addition, a portion of the investment will be used to open a new distribution facility in an underserved community of the New York tri-state area.

“I’m trying to figure out the right retail strategy,” Combs told WWD earlier this month. “I don’t want to just roll it out. There are some things about the women’s business I’m still trying to figure out. I have the design and the infrastructure, but I’m still compiling the exact campaigns, marketing and sales plan.”

Burkle’s company has completed mergers and acquisitions valued at more than $30 billion since its inception in 1986, but this appears to be the first time Yucaipa has put significant funds into the apparel industry. The majority of its business has been done with large supermarket chains such as Kroger and Fred Meyer Inc. Supermarket News, WWD’s sister publication, has called Burkle the food retail industry’s “premier consolidator of the last decade.” He jumped into the beleaguered Kmart, seeing an opportunity to grow its supercenter formats, and also bought a significant stake in Fleming, the food distributor. But he sold both investments before the two companies hit the financial skids, with Kmart filing for Chapter 11 last year. It came out of bankruptcy in May.

Burkle is also a high-profile contributor to the Democratic party, and in 2002, former President Bill Clinton signed on as an adviser to two of his investment funds.

Last year, Yucaipa sold the 113-store Dominick’s chain to Safeway for $1.8 million and then tried to buy it back for about $350 million. The press-shy Burkle is also a big-time investor in Hollywood, including being a financial backer for former Disney executive Michael Ovitz’s company, the Firm, before a feud between the two broke out in June last year. It was reported that Ovitz owed Burkle about $10 million for business ventures they entered into together.

The deal between Yucaipa and Sean John recalls the $135 million investment made by Goldman Sachs Capital Partners in Polo Ralph Lauren in 1994. At the time, Polo was privately held, but went public in an initial public offering three years later. The Goldman Sachs financing enabled Polo to expand, while giving Goldman a significant return on its investment when the company went public.

Sean John has quickly developed into a strong force in the men’s apparel industry and has been nominated three times in a row for the men’s wear designer of the year award of the Council of Fashion Designers of America. It started as a small T-shirt and jeans brand and has grown into a respected designer sportswear business. The collection is now sold in 2,400 doors, including Federated Department Stores and May Department Stores, and is the second best-selling men’s brand at many Bloomingdale’s doors, just behind the Polo brand.

Before Combs opens the first freestanding Sean John flagship boutique at 41st Street and Fifth Avenue in the spring, he plans to open between five and 10 in-store shops in such locations as Bloomingdale’s 59th Street, Macy’s Herald Square and Burdine’s, which will carry a full range of the men’s collection. The Fifth Avenue store will be the first site in what ultimately could be a 200- to 300-unit national chain.

But while Combs may be the first urban label to secure backing from a major investor, he isn’t the first to seek it out. Hip-hop mogul Russell Simmons is actively searching to be bought out so he can grow his business, but sources said he refuses to take any less than $300 million for his $260 million clothing empire, which includes the Phat Farm and Baby Phat brands. As for now, it looks as though Kellwood Co. and Tommy Hilfiger have both showed interest in Simmons’ brands, with Kellwood apparently having the lead bid. Two years ago, Jennifer Lopez partnered with Andy Hilfiger in order to fund her JLo brand and it has grown to sales of $130 million.

Sean John’s success also has helped set off a virtual stampede by celebrities to launch their own fashion collections. Gwen Stefani and Eve currently are previewing the spring collections for their respective L.A.M.B. and Fetish lines, while everyone from Eminem to Beyoncé to Hilary Duff have announced plans to do their own clothing collections.