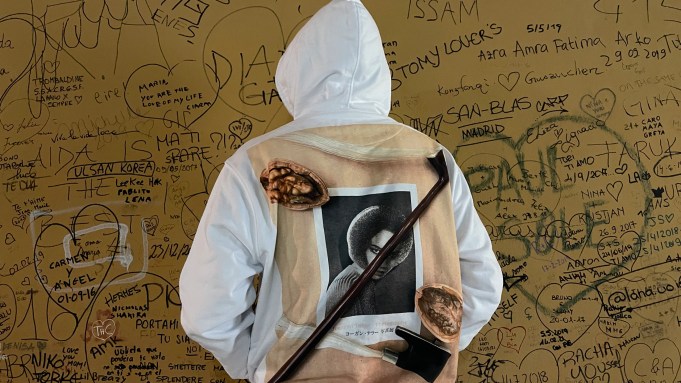 LONDON — Palace is on a collaborations roll: After working with Mercedes-AMG and Vans on special collections, it has teamed with Juergen Teller on a capsule of hoodies, T-shirts and skateboards featuring new and archive work from the photographer.

Palace and Teller have been working together since 2018, with Teller shooting the Palace skate team for campaigns and look books in London; Palm Springs, Calif.; Naples, Italy; Tokyo, and Kentucky.

For this latest capsule, Teller has photographed new work and also retrieved historic images, including his “Frozen dead dog, Czechoslovakia,” image from 1990. The photographer took the picture in the bleak and barren landscape of his late father’s hometown.

There is also an image of the model Kristen McMenamy, captured during a cover shoot for Sueddeutsche Zeitung Magazin, and a self-portrait showing the photographer naked from the waist up, with a cigarette in one hand and a sign in the other that reads “Fußball Ist Unser Leben, Bubenreuth,” or “Football is our life.”

Pieces in the collection include a hoodie with a collage composed and shot by Teller with personal artifacts including a photograph styled by his close friend and collaborator, the late Judy Blame.

There is also a hoodie featuring grimy, ashy, stubbed-out cigarettes smoked by the Norwegian bestselling writer Karl Ove Knausgård; a boxy collared shirt with a photograph of a dog being washed in the sink; a tote bag with frogs, and a skateboard with an image of Teller’s partner Dovile dressed in a black chador, from a photograph taken on a trip to the Middle East.

The Teller capsule follows in the wake of a debut footwear and clothing collaboration with Vans that bowed last week. That collection features a Jeremy the Duck motif that shows the bird paddling across Vans’ Skate Authentic style in a contrasting motif.

As reported last month, Palace upgraded its wheels from skateboards to race cars in a collaboration with Mercedes-AMG, the sporty, performance division of the German automobile-maker.

It was Teller who suggested that Anderson work with stage, film and TV actress Sophie Okonedo on the fall 2021 men’s and pre-fall women’s collections.

The Tony Award-winning, Oscar- and BAFTA-nominated actress modeled both collections. She caught Teller’s eye in her role as Charlotte Wells, a stylish psychiatric patient with multiple personalities, in the Netflix series “Ratched.”

The photographer shot images of her with nonsensical scribbles on them, such as “UFO sighting,” “Man from behind,” or “Check mate with banana tree,” giving them an absurdist feel.