Starting July 5 at the Musée Bourdelle in Paris, “Backside” explores the tricky relationship fashion has with the back part of garments.

PARIS — Visitors were in for quite a surprise upon arriving at the Musée Antoine Bourdelle on Wednesday night: Most of the statues of the main gallery had been turned backwards.

Running from July 5 to Nov. 17, the exhibition — the third organized by the Palais Galliera outside of its usual location, after the Madame Grès exhibition in 2011 and the Cristobal Balenciaga one in 2017 — literally looks backward, focusing on the importance of the back of garments in fashion design.

“I wanted to deal with backs both in the anatomical and psychological sense,” said Samson, who reached out to a psychologist and an osteopath to help with his research. “The back is the only part of our body that we can’t see, and that others actually have a better view of. Many fashion designers have played around that idea, focusing on its vulnerability.”

“Backside” looks at the evolution of the use of the back of garments throughout history, from the imposing trains of the 13th century — which were modeled on peacock feathers and served as a demonstration of wealth and nobility — to the football jersey, spelling out the player’s name so he can be readily identified on the field. 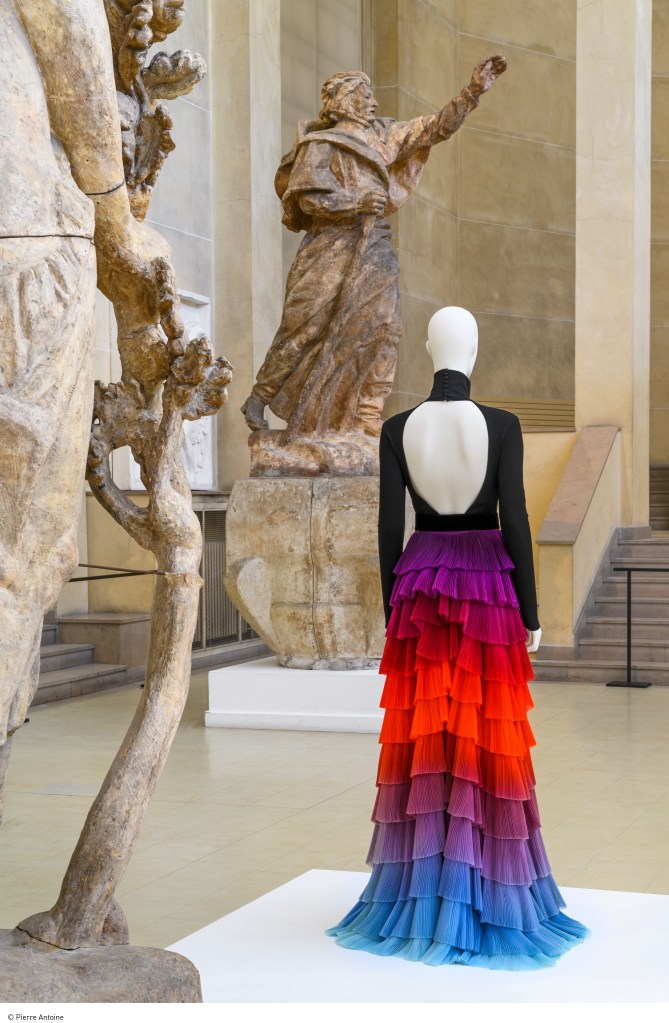 A silhouette by Clare Waight Keller for Givenchy haute couture spring 2018, which was worn by Cate Blanchett at the 2018 Cannes Film Festival.  ©Pierre ANTOINE

Upon descending into the main part of the exhibition, located on the lower level of the museum, visitors entered a tunnel plastered with runway pictures of the 3,607 looks that were shown during the last Paris Fashion Week — all photographed from the front.

“A couple of years ago, you could still come across pictures shot in profile or from the back, but check any runway site today and they are now completely nonexistent,” said Samson. “The mentality has changed: fashion houses know that revealing the back of garments gives competitors key information in order to copy the item. But it has a trickle-down effect: A lot of fashion students now solely focus on the front of silhouettes, because they know that’s the only thing that’ll be shown. We’ve gone from designing in 3-D to pure 2-D.”

Reminders that the human body is very much 3-D are dotted throughout the exhibition thanks to sculptures by Bourdelle paired with some of fashion’s most form-defying silhouettes. A plaster cast of the aging back of sculptor Auguste Rodin — Bourdelle’s mentor — sits in the vicinity of a Comme des Garçons dress from the spring 1997 “Lumps and Bumps” collection, with cotton shapes sewn into the fabric deforming hips and shoulders.

Further along, “Backside” explores the notion of surprise: A Jean Paul Gaultier trenchcoat dress from the “Black Swan” fall 2011 couture collection looks quite simple from the front, but reveals an entirely cutout back.

“Throughout fashion history, the back of garments was always the forgotten part,” said Samson, gesturing to a glass case featuring two elaborately embroidered men’s waistcoats from the 18th century, which both have surprisingly plain linen backs. “At the time, a gentleman wasn’t ever supposed to take his jacket off in public, so why bother decorating what can’t be seen?” 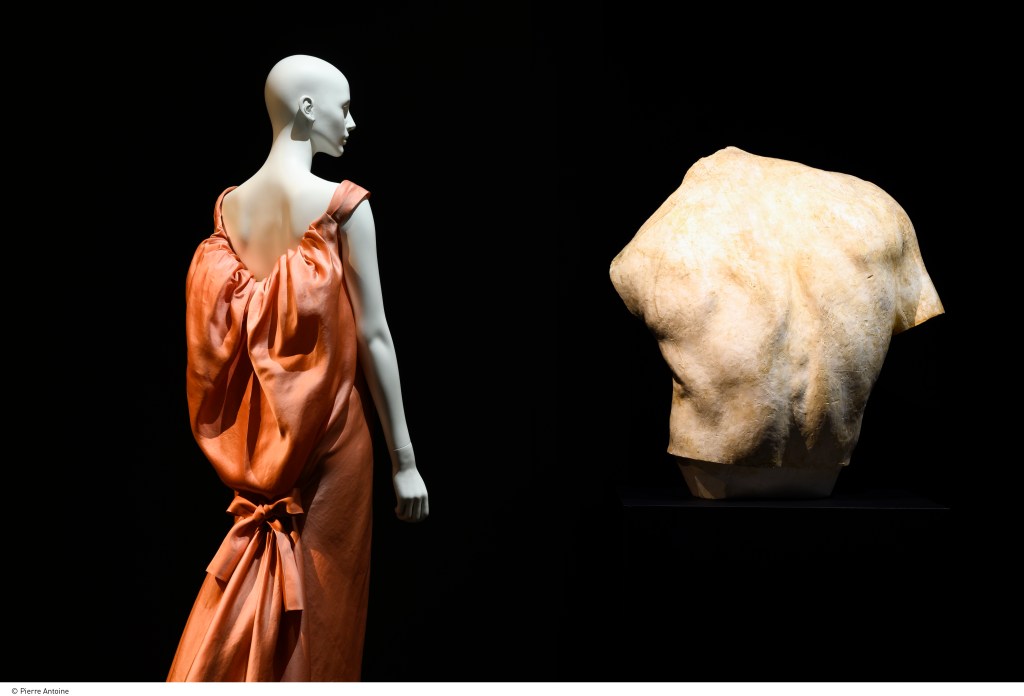 A Balenciaga dress from the fall 1961 haute couture collection next to Antoine Bourdelle’s “Torse d’Adam” sculpture dating from 1889.  ©Pierre ANTOINE

Past a Prada nylon backpack and a silhouette from the Rick Owens spring 2016 “Cyclops” collection, for which women carried other women on the runway, an entire section was devoted to corsets and items that close from the back — a type of fastening exclusive to the feminine wardrobe.

“Anatomically, the human body isn’t made to put the arms behind the back,” said Samson, who added that the osteopath he worked with for the exhibition has around six cases of clothing-related back injuries a year, all contracted by women.

“This means that women are placed in a state of dependence,” he continued. “At the time of the corset, which appears in the 15th century, they literally cannot dress themselves. Whatever their social condition, they have to have someone lace them up.”

Fast-forward five centuries later, and the back is left completely free: With the emergence of Hollywood glamour — and its censorship laws, prohibiting actresses from showing too much cleavage — back-baring dresses became all the rage in the Twenties.

This went on to inspire Yves Saint Laurent, who in 1971 imagined a daring long-sleeved black dress with an entirely naked back, barely covered by a sheet of fine black lace, and Guy Laroche’s jaw-dropping evening dress worn in 1972 by Mireille Darc in “The Tall Blond Man With One Black Shoe,” so revealing it unveils the higher part of her buttocks.

The back part of a garment can also speak volumes when left covered. “Backside” closes with a selection of items spelling out names, messages and titles, such as Gucci’s “L’Aveugle Par Amour” bejeweled jacket from Alessandro Michele’s spring 2017 collection; the silk dressing gown Edith Piaf gifted her lover, boxer Marcel Cerdan, on which she reportedly embroidered his name herself, and Melania Trump’s “I Really Don’t Care, Do U?” Zara parka that she wore in 2018 while visiting a children’s refugee camp on the Mexican border. 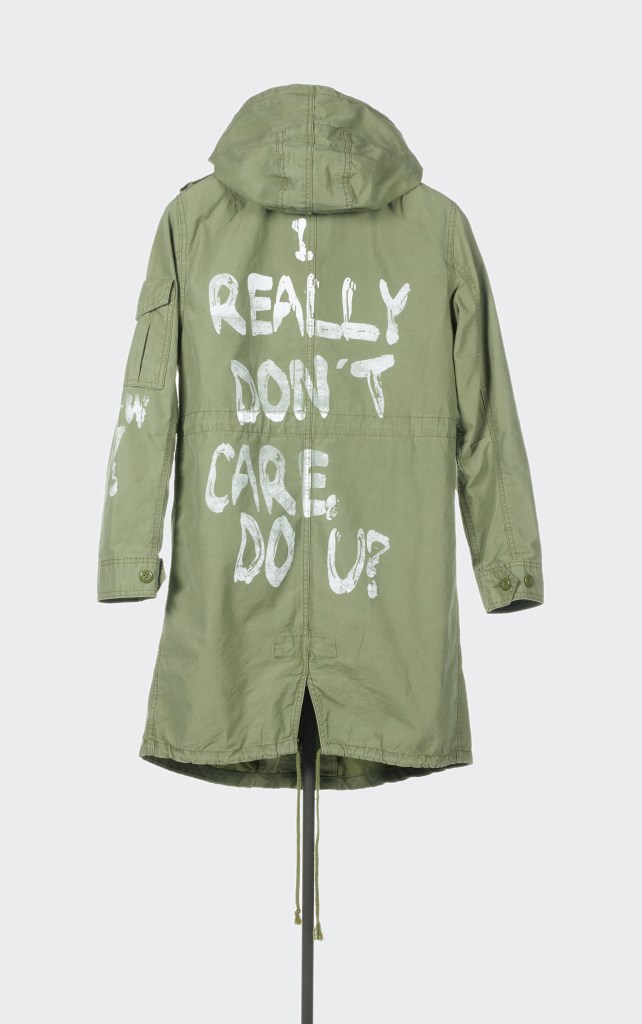 “The back is the biggest flat surface of the body and has been used across the ages to flag various messages, from names of footballers on sports jerseys to protest messages, such as the jackets worn by Black Panther activists,” said Samson.

“Melania Trump’s parka proved to what extent showing one’s back can be seen as making a point,” he continued. “She literally couldn’t hide her message.”