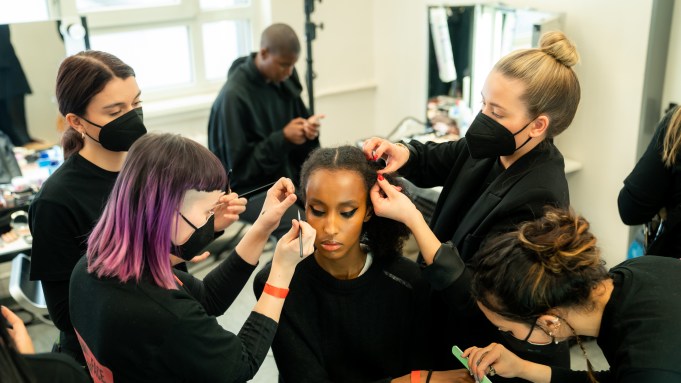 One of only three official runway shows to happen at last week’s pared-down Frankfurt Fashion Week in Germany took place in a unused office building, making the best of pandemic restrictions.

The show by Berlin-based Susumu Ai saw models walking down a central corridor, before zig-zagging through different connected offices. This meant that the 100-strong audience could still be invited — they were split up and sent into the different rooms, where they could watch the looks go past but still maintain social distancing.

Despite the pandemic restrictions and the cancellation of most of Frankfurt Fashion Week’s larger events, “it was very special for us,” Susumu Ai designer Alisa Menkhaus told WWD.

She felt that, as with so many other industries impacted by the COVID-19 crisis, necessity had been the mother of invention and had brought more creativity and digital progress.

Participants at the second Frankfurt Fashion Week, in the central German state of Hesse, had only two weeks in which to come up with alternatives after organizers of the event were forced to cancel most of the in-person activities in late December.

That included the series of trade fairs arranged by the Berlin-based Premium Group that would have brought international buyers and media to the city.

Previously, several different trade fairs were intended to take place: Premium for high-end mainstream brands; Seek for streetwear; Neonyt for eco-friendly wares, as well as two newcomers, The Ground, a consumer-facing fashion festival, and Val:ue, which is being described as a new fair “for established brands.” All were canceled.

The result was a vastly slimmed-down schedule that mostly had national appeal and provided an opportunity for local industry insiders to come together at just a handful of occasions.

A number of smaller events with invited guests were still permitted under German pandemic rules — that is, guests had to be either fully vaccinated or recovered from a COVID-19 infection and also had to show a rapid test for infection, taken the same day.

Instead of shows and stands, Nenonyt, which has become increasingly important as the industry gets greener, was reduced to one installation last Tuesday evening. Invitees could browse around 50 environmentally friendly brands styled on 13 models.

It was frustrating, conceded Bettina Baer, Neonyt’s show director. “The volatile state of the pandemic is what really makes our work hard. But in the end — and it might sound like a stereotype — teamwork made it possible to turn what was once a runway show into an installation, that was more like an art exhibit,” she told WWD.

As part of the Fashionsustain conference last Wednesday, livestreamed panels went ahead. The discussions, on topics such as transparent supply chains, corporate responsibility and consumer behavior, were livestreamed as a small, socially distanced and mask-wearing audience watched on.

Outreach to the city is part of the Frankfurt Fashion Week project and there were also other events happening around the metropolis, including several photography exhibitions and further gatherings at the Frankfurt Fashion Lounge. The latter was a separate venue where it was possible to shop the runway after small shows by the likes of Berlin-based favorite, Dawid Tomaszewski, and Frankfurt stalwart, Albrecht Ollendiek.

Ollendiek’s show took place inside the city’s historic opera building and the ladies-who-lunch looks were an apt reflection of the fact that the state of Hesse is one of the wealthiest in Germany, its GDP of around 280 billion euros — equivalent to that of a small country.

“All in all though, when you were walking around the city, it was hard to tell that there was a fashion week on,” one attendee told WWD off-the-record. “In Berlin, you could always tell there was something going on. There would be interesting-looking people on the train or lots of people queuing up to get into shows in unusual locations. You’d notice it. But here, it didn’t really feel like things went off with a big bang.”

Then again, it’s been an unusually tough start for Germany’s youngest fashion event.

When it was first announced, it drew criticism for pulling the Premium Group’s series of well-respected apparel trade fairs away from Berlin to  Frankfurt, which is generally better known as Germany’s financial hub and home to the European Central Bank.

At the same time, the city’s mayor boasted that Frankfurt would become Germany’s “new fashion capital.” Additionally, the week is being managed by Messe Frankfurt, one of the world’s biggest trade fair and convention operators.

Messe Frankfurt runs 58 different textile fairs around the world and sees the new, local fashion week as a logical building block in its wider portfolio of similarly focused trade fairs.

“We see it as part of a whole ecosystem,” Detlef Braun, Messe Frankfurt’s managing director explained to WWD, adding that Frankfurt Fashion Week’s unique selling point for international attendees will be its ongoing focus on sustainability and technology.

Unfortunately, the launch event in July 2021 was digital-only due to the health crisis. Then a week before Christmas 2021, most of the major events at January’s edition again had to be canceled due to rapidly rising infection rates. Other fairs planned for the first quarter at Messe Frankfurt were also called off.

“The last two years have been very difficult,” Braun confirmed when WWD asked how the company had made any money from the last two events.

Braun insisted that the shortfall wouldn’t endanger the next edition of Frankfurt Fashion Week, planned for early July, however.

The city of Frankfurt and its state government are also financial partners of the event, having promised to invest 10 million euros in it over three years, in the hopes that it would attract millions more in business into the city.

“During the last two events, there were no revenue streams,” Braun conceded. “And obviously at the moment we have to manage things very carefully. But the feedback we have been getting from our shareholders and from our partners indicates that this is a good investment. It may not be harvesting time yet,” he concluded, “but we think it’s worthwhile.”