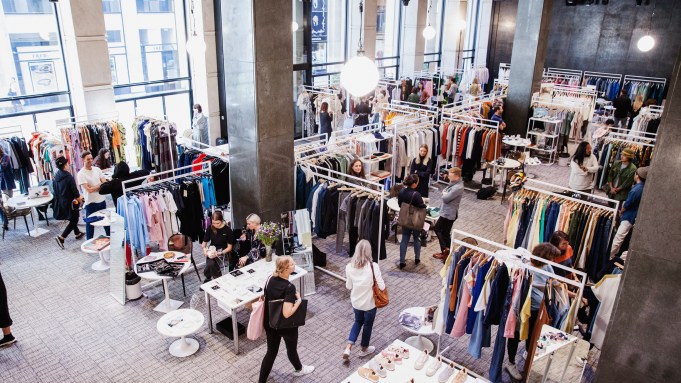 PARIS — It’s not about the journey, it’s about the destination, said buyers and talent scouts at the latest session of women’s wear trade shows Tranoï and Woman in Paris.

On Saturday, despite continued “gilets jaunes” protests, business went on unimpeded. “Some buyers opted out of Saturday appointments,” said Jennifer Behr, who has been presenting her hair accessory range (of “Gossip Girl” headband craze fame) at Tranoï’s Carrousel du Louvre location for over six years. “But despite expecting it to be low, foot traffic was steady.”

Likewise, the Sunday closure of the city’s first to fourth arrondissements for the “Paris Respire” (“Paris Breathes,” in French) operation to alleviate traffic-generation pollution seemed to have little impact.

Authorities and organizers had taken steps to ensure awareness. “Ahead of the season, the Paris mayor’s office and I have sent out a letter to buyers, via the trade shows, to wish them a warm welcome in Paris,” said Pierre-François Le Louët, president of the Fédération Française du Prêt à Porter Féminin, the body representing the business interests of French ready-to-wear brands, as he took a tour of Woman on Saturday.

Visitors had been forewarned and taken precautions. Buyers heading underground to the Carrousel du Louvre location of Tranoï were grouping appointments and opting out of external appointments and shows.

Attendees said that among the fall looks was a return to femininity, with strong shoulders and belted pant suits, a la the Eighties. Retro shapes drove accessories, many with a Forties feeling.

“The introduction of brown and neutral color palettes was evident,” noted Nicholas Thorne-Atteshlis, buyer for Zalando Premium, who attended Tranoï briefly. “I am also really looking forward to seeing the evolution of streetwear, as we saw tailoring and luxe fabrics being thrown into the mix. And finally, as we become more environmentally aware, the topic of sustainability is being translated more and more into everyday fashion. Personally, I would love to see this trend evolving further across the whole industry giving consumers easy access to sustainable products and more insight into the processes behind it.”

But there were also signs of shifting expectations across the board. “Retail is definitely evolving,” said Florence Calvet, who advises Bloomingdale’s buying and executive teams. “Department stores are becoming giant concept stores, specialty stores are developing, despite retail having suffered in Paris from a conjunction of protests, late sales periods and extensive building work throughout the city.”

For a number of retailers, Paris’ March session is considered late in the season, as good as closing a run-on season that started with resort 2019 in late 2018. “Most buyers have spent most of their ready-to-wear budget early in the season in January, and therefore have perhaps 30 percent spend left, to complete selections or for accessories,” said Man/Woman’s Antoine Floch.

“I’ve been looking for something new but most of the clothing brands I have gone to see are repeat business. Among the new buys, it’s mainly South Korean designers,” said Anna Luisa Jones, founder of Zürich-based concept store Rumour. “I’m looking for cashmere basics and new jewelry brands.”

“The days are over where you could expect to come into a trade show and expect order after order,” said Carly Vidal Wallace, creative community curator at Not Just a Label, a talent scouting and promotion platform. “For all trade shows, it really comes down to the designers reaching out ahead of it, and building brand awareness. The abundance of social media and the immediate accessibility of collections straight through the designer’s Instagram accounts has definitely changed the landscape. We’re following everything, seeing what’s trending. Scouting is daily.”

Yet for brands, that didn’t necessarily translate into disappointment. “[Tranoi] is a nice platform, at a nice period, to meet our existing customers,” said Andy Yoe, global marketing and business developer for buzzy South Korean home fragrance brand Soohyang, stocked at IT Hong Kong, Harvey Nichols in Doha, the Conran Shops in Paris and London, as well as Barneys New York.

At Woman, in addition to a stronger-than-ever accessories selection that included jewelry designer Justine Clenquet and newcomer bag brand Cahu Paris, there was a sprinkling of beauty brands, in keeping with Floch and cofounder Olivier Migda’s awareness of “the need to offer complementarity. Multibrand retailers are supplementing their offer with cosmetics, perfumes and also lifestyle. It was important to bring them together with design,” Floch said. For some exhibitors, Paris is only the second stop in a triptych of destinations that started in New York last month and concludes in Tokyo on March 19 and 20.

Tranoï is looking to bridge the physical and digital worlds. After a one-year beta period open to a selection of brands, the show’s “Online” platform opened to buyers during Paris Fashion Week. It offers yearlong ordering capacity from some 40 brands, including French knitwear label Stella Pardo, Faroe Island’s Gudrun & Gudrun and Ukrainian designer Frolov.

In Paris, the exhibition reinforced its network of venues, continuing to supplement the historic Carrousel du Louvre and Bourse locations with the weeklong Richelieu site for international showrooms and Tranoï Week, held in cooperation with the British Fashion Council in the Bastille neighborhood. “There is a marked interest toward curation and originality, as well as a need to create a seamless phy-gital ecosystem, a truly omnichannel platform between designers and retailers,” said chief executive officer David Hadida.

Tranoï is also expanding eastwards with its first Shanghai edition, from March 28 to 31 hosted by Ontimeshow and powered by fashion management group DFO International.

At Vendôme Luxury, a trade show geared toward eveningwear, stylist Catherine Baba was named ambassador of the edition held March 1 to 4, as founder Carole de Bona and new business partner Florian Sailer, a showroom organizer and DJ, put the accent on networking by hosting evening events.

Inspiration: A blouson and jacket-heavy wardrobe proposition, the brand is the second rtw foray for Sérigny, an art photographer and graphic designer. Now in its second selling season, Miko Miko has already been inducted into the Talents program, an initiative supporting emerging French design created by the Fédération Française du Prêt à Porter Féminin with support from the DEFI fund. An exclusive summer capsule with e-tailer 24 Sèvres is set to drop in the coming months. The “Made in Paris” label doesn’t hurt, either.

Inspiration: Launched in 2010 when she was barely 18, Clenquet’s jewelry line has an achingly cool appeal. Her reinterpretation of underground cultures seen through a glam-rock lens brought her to the attention of Opening Ceremony within months and her designs have since been spotted on the likes of Lady Gaga, Charlie XCX and Sofia Richie. For fall 2019, she’s named her collection Final Girl, in reference to Nineties slasher flicks and its heroines.

Key items: Freshest are her baroque pearl and silver ball choker necklaces, but her variations on multi-chain pieces continue to charm.

Inspiration: Cofounders Ludvig, a designer, and Gudrun Rógvadóttir, an international business development whiz, launched their namesake brand in 2007 with the hope of reviving the wool industry of the Faroe Islands, an archipelago in the Northern Atlantic. Keen to create a virtual ecosystem for their brand, the pair first tapped their homeland’s female knitting communities, before expanding their outreach programs to Jordan and Peru, offering empowering revenue to women otherwise barred from accessing the workforce.

Inspiration: U.N.X. stands for Unexpected, a fitting moniker for a brand inspired by an attempted robbery experienced by Marie Dall’Arche, who fought off her attackers thanks to Krav Maga. The collection aims to bring together a minimal urban wardrobe with performance activewear, to allow women to segue between their training and other activities. “But it wasn’t about making another T-shirt brand,” said Dall’Arche, who launched the brand with husband Olivier, a former advertising executive. “The idea is also to create a community of women who recognize — and potentially assist — each other through cues like the logo or badges on the garments.” The pair have also launched the U.N.X Fight Club, a series of free self-defense classes.

Inspiration: This Ukrainian brand wants to take down outerwear out of its position as an in-between layer. Creative director Khaetskaya met Maria Montieva, whose family has been manufacturing down garments for a quarter of a century. For fall, the pair’s inspirations ranged from the bright Eighties power girls to the stark urban minimalism of the Nineties.

Inspiration: A Central Saint Martins and Savile Row apprentice, Lee and sister Nana Lee are fashion royalty in their native South Korea, with their parents helming the longstanding Lie Sang Bong house, named after their father. Launched in 2011, LIE — standing for “love, identity and ego” — brings together its designer’s penchant for men’s wear and flattering feminine touches.

Key items: A trenchcoat with saddle-sleeve, a softly tailored suit with a panel draped down the front, dresses where the codified lines of Korean traditional garments have been transformed into a power shoulder.