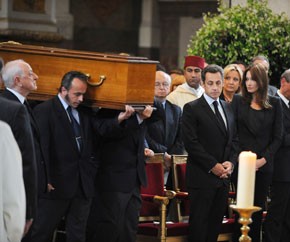 PARIS — Hundreds of onlookers thronged behind barriers around the Eglise Saint-Roch here Thursday as the world of fashion bid adieu to Yves Saint Laurent.

When Saint Laurent’s remains arrived at the 17th century church on the Rue Saint-Honore on the Right Bank, applause erupted from the crowd that had come to pay their respects to the celebrated couturier, who retired in 2002.

Saint Laurent died of brain cancer last Sunday at age 71.The memorial mass is likely to be remembered as one of the most important and biggest French fashion funerals since the death of Christian Dior in 1957.

People began to arrive in the morning to stake out a spot behind the police cordon from which to watch the mass. A giant-screen television, first broadcasting YSL fashion shows, was erected outside the church for the public, who snaked around the block. Inside, the church, Paris’ parish for artists, was redolent with lilies and jasmine, while the outside was ringed with bouquets of white roses.

The mass started at 3:30 p.m., but the more than 800 guests began to trickle in as early as two o’clock. A visibly emotive Catherine Deneuve arrived cradling a bouquet of wheat. “Saint Laurent was pure elegance,” she said.