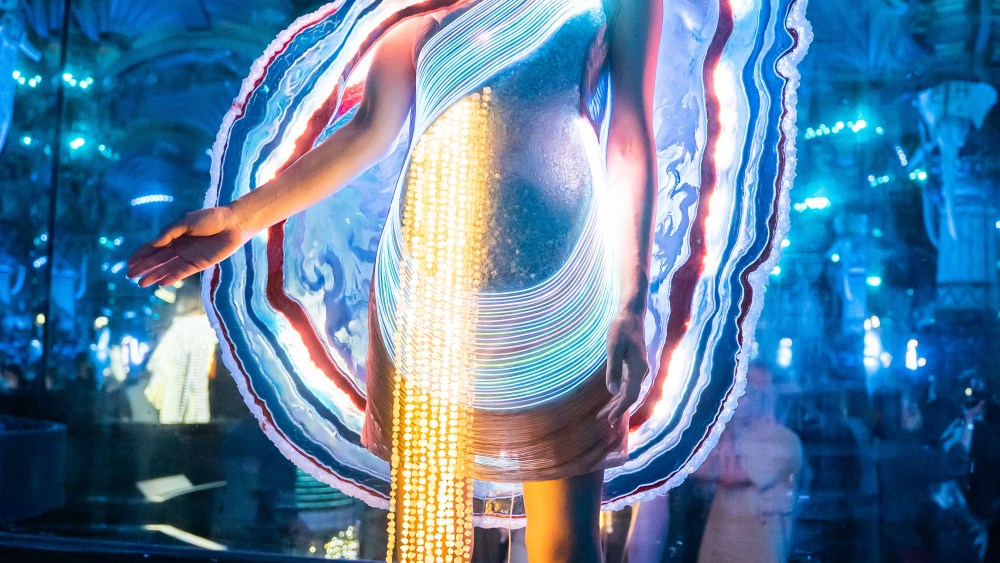 As Paris’ top houses take to the runways again with their fall couture collections, an emerging generation is already waiting at the sidelines, experimenting with cut, developing the possibilities of knitwear and even integrating high-tech components into their work.

When Andrea Brocca left Dubai behind at age 17, he had his eyes set on Paris and the fashion industry. “I felt I had reached a point where I was touching the walls there,” said the designer, who grew up in the Middle East and is of Italian and Sri Lankan descent.

By then, he already had a few notches on his belt, having interned at Temperley in London, opened his own label in Dubai and even entered the Guinness Book of Records as the youngest ever couturier by the age of 16.

At the Ecole de la Chambre Syndicale, he specialized in haute couture garment construction, before going on to Central Saint Martins where he pursued a further degree in fashion design and marketing. The pandemic scuppered plans that included working at Bottega Veneta.

Despite the fact that 2020 saw him graduate and put his name on the fashion map when Lady Gaga wore one of his designs on the cover of Billboard, Brocca felt he needed to make a bigger splash. “Without the symbolic closure of graduation, I needed a way to actually prove myself in this industry. I don’t want to be forgotten,” he said.

For his Parisian debut, titled “Equilibrium” and shown alongside some of his paintings in an art gallery, he went back to the Fibonacci sequence, a mathematical formula he’s long been obsessed with and that is better known as the “golden ratio,” an ideal proportion that occurs frequently in nature.

He translated his musings into volumes sculpted with needle and thread from deadstock luxury fabrics, such as organza, silk moiré and leather.

Gravity-defying shoulders flowed into sculptural sleeves on a corseted leather jacket paired with matching leather trousers. Another looked like whirlpools of white wrapped around the body and spilled over into a dramatic fishtail. A third jutted upward from the shoulders, making the model look like she was encased in a structure that bore a passing resemblance to the Sydney Opera House.

This initial proposal may feel theatrical, but that’s what Brocca intends. Fascinated by “the way Charles James and Azzedine Alaïa approached architecture within fashion,” he considers couture as a space for experimentation, rather than commercial endeavors.

“As an emerging designer, it’s important to push notions of construction and explore pattern cutting. We easily forget what technique means in our generation, because [the image of fashion in] pop culture is about hype,” he said.

On the business side, Brocca is currently in talks with a retailer to translate his experiments into a commercially viable demi-couture offering, which also fits in a more sustainable business model for his brand. “I can’t afford to have big stock and have it dying,” he said.

On the subject of experimentation, with each of her subsequent creations, Clara Daguin pushes the boundaries between art, technology and fashion a little further. “A lot of people already do amazing things in ready-to-wear. That’s not my strength. I prefer to push into territory where no one else has ever gone before and offer something new,” Daguin said during a preview as she and her team put her interactive designs through a final series of tests.

She had partnered with Jacquard by Google to create five cosmic couture pieces brought together in a luminescent hybrid of presentation, installation and performance.

Within the kaleidoscopic Hall of Mirrors at the Musée Grevin — built for the 1900 Universal Exhibition — the fluctuating lights in her designs twinkled back infinitely from walls and ceiling, creating a mysterious otherworldliness. The concept was inspired by The World card, the final arcana in the tarot deck, representing the end of a cycle. On the card, a central feminine figure is surrounded by the four elements — earth, water, fire and air.

This central oracle, portrayed by former cabin model Axelle Doué, sported a hooped skirt embroidered with motifs representing the alignment of the planets at the time of Daguin’s birth, its layers twinkling with a constellation of lights. Her interactive gloves, embroidered with Google’s Jacquard yarn, controlled the lights on her own outfit and the four elemental designs.

She encouraged visitors to let her “read” their palms, provoking fluctuations in the light patterns of each creation. Ropes of crystals resembled a shower of shooting stars falling to Earth, a sculptural creation in the form of a geode radiated with color and a translucent pleated and draped gown seemed to pulsate with light.

As well as the fiber-optics and interactive threads, Daguin combined traditional couture materials like organza, silk and horsehair with elements of molded resin, plexiglass and alum stones grown in her studio to create the designs, each of which took between 1,000 and 2,000 hours of work to perfect.

Louise Lyngh Bjerregaard also long had Paris in her sights. Seven weeks ago, the Danish designer left Copenhagen with just the keys to her new Paris studio in hand. “There was an opportunity to get this space and I just jumped at it,” she said, a few days before her off-calendar debut show.

A graduate of Central Saint Martins and the Scandinavian Academy of Fashion Design, Lyngh Bjerregaard then worked for Ann-Sofie Madsen and New York-based Eckhaus Latta before striking out on her own to explore materials, and knitwear in particular.

“I just love everything about materials, from knitting to fabric manipulations where you create the textile yourself,” she said, showing off a felt she’d created using a Japanese technique that blended wool and silk chiffon printed with her name into a crinkly yet supple surface.

At the design stage, Lyngh Bjerregaard prefers to drape straight on the body, instead of sketching, to limit the amount of materials used, since she uses deadstock or upcycled resources, but also because “you’re just more free when you go directly on the body,” she said, adding that she enjoyed the mental exercise of reconciling her designs with the pieces of material available.

As a student, she found herself low on funds and had to settle for a thin fishing line yarn. She spent the following six years perfecting her technique to turn this fragile thread into knits with transparent parts. A capsule of those has just dropped at e-tailer Ssense for fall 2021.

Even in their maximalist expressions in the lineup, their delicacy contrasted with stately skirts made from a flurry of leather pieces patched together and mannish coats cut from tough wools. Even under the trailing threads and raw edges, her precise cuts could be seen.

For her, too, couture is a playground to road-test ideas — like knit suspenders, patchworked corsets, trousers with pockets running all over the leg and other craft-intensive fuzzy coats — and see where they take her, in her house and beyond it.

”If it attracts the eye of any designers who value the artisanal, they can consider the collection my résumé,” she said with a grin.