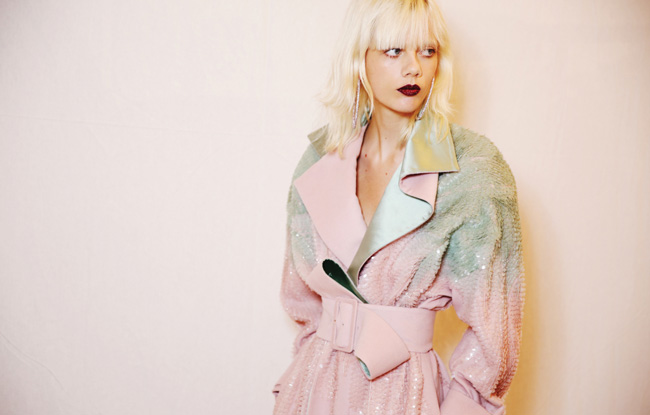 PARIS — Paris couture houses are bracing for a season of changes as luxury executives question the future of the traditional runway show in a context of ongoing uncertainty — even for the 1 percent who make up high fashion’s customer base.

The displays, which kick into high gear today, mark the start of anniversary years for Dior, which turns 70, and Schiaparelli, which was founded in 1927. Versace is scaling down its presence by staging a presentation in lieu of a catwalk show, while Maison Rabih Kayrouz returned to the schedule with a display on Sunday evening, albeit showcasing its fall ready-to-wear collection.

Houses like Chanel, Giorgio Armani and Jean-Paul Gaultier will be showing in their usual slots, though all of them underlined the importance of taking their collections on tour afterward, following a year impacted by terrorist attacks, which discouraged high spenders from visiting Paris.

It promises to be a celebratory year for Dior, with Maria Grazia Chiuri, the house’s first female designer, showing her debut couture collection at the Musée Rodin today, to be followed in the evening by a masked ball. In July, Dior will be the subject of a large-scale retrospective at Les Arts Décoratifs featuring some 500 outfits.

Sidney Toledano, chief executive officer of Christian Dior Couture, said the house is doubling the space dedicated to the workshops that produce its haute couture creations at the brand’s headquarters on Avenue Montaigne. Next month the company will open a new space nearby dedicated to the  archives.

“Haute couture will always remain at the heart of the house — it’s extremely important,” he said. “We saw growth in 2016, despite security issues in Paris in the first half. The second half, with the fall collection shown in July, was tremendously successful.”

Dior will stage a single show this season, having doubled its usual space to accommodate between 600 and 700 guests, he said.

Chanel, meanwhile, will again have two shows at the Grand Palais on Tuesday.

Bruno Pavlovsky, president of fashion at Chanel, said the maker of tweed jackets and quilted handbags was fresh off another record year, with a two-digit rise in couture sales in 2016. “Our order books are full,” he reported.

The brand is pulling out the stops to bring luxury clients back to Paris. It showed Karl Lagerfeld’s pre-fall designs at the Ritz Paris hotel in December and plans to unveil its cruise collection in the French capital on May 3, in addition to its regular ready-to-wear and couture shows here.

But Pavlovsky acknowledged that the handful of clients who can afford couture outfits with five- to six-figure price tags are increasingly less likely to make the trip, preferring to let couture come to them.

“Fewer and fewer people come to Paris in January and July — even fewer in January than in July,” he said. “Before you had the same 50 clients ordering from more or less all the Parisian couture houses. I think that’s really changed. Today there are many more of them — we catered to 30 nationalities last year — and they don’t necessarily come into contact with haute couture at the show.

“Some of them tell us that the show almost makes them too visible. They like to see couture in a more intimate setting,” Pavlovsky explained.

Chanel’s couture teams travel at least three times a season, taking the collection to destinations like New York, Hong Kong and Dubai. The house also plans to bring the “Mademoiselle Privé” exhibition, highlighting its couture activities and high jewelry, to Seoul in June.

Giorgio Armani said he was organizing private appointments to show his new collection in the U.S. and the Far East. “Introducing the collections to the public is key — not all clients come to Paris. That’s why the collection has to travel,” he said.

The designer’s Armani Privé couture division reported a “considerable” increase in new orders in 2016, with the Middle East and Far East posting the best results. “These markets are significant since they demonstrate the wide range of haute couture clientele today, which also includes very young women,” Armani said.

Asian women, in particular, are rapidly evolving. “They’re more daring and recently they seem more attracted to evening gowns. In general, I can say that today there are younger women among the clients and I find working for them very exciting in this regard. There’s a very energetic flow of ideas,” the designer said.

Versace, meanwhile, is once again switching to a more intimate format to present its custom-made Atelier Versace creations. The Italian house returned to the Paris couture schedule in 2012 following an eight-year hiatus, and its high-profile shows regularly drew the likes of Jennifer Lopez, Kate Hudson and Lady Gaga.

“We are moving to a more client-facing strategy with this part of our business,” the company said in a statement. “Beginning in 2017, we will be bringing the Atelier Versace collection to key markets around the world. We will host private presentations of the collection for clients, combined with elegant cocktail receptions and dinners.”

Schiaparelli is also betting on the personal touch. For the first time since its relaunch in 2012, the house — which recently regained the coveted haute couture designation awarded by France’s Industry Ministry — plans to show designer Bertrand Guyon’s designs at its headquarters on Place Vendôme. The space was recently extended to house its nascent prêt-à-couture collection and is decorated with mementoes of founder Elsa Schiaparelli’s career, including her collaborations with Surrealist artists like Salvador Dalí.

Delphine Bellini, deputy general manager of Schiaparelli, said that being able to attend to clients worldwide directly in their homes had insulated the house from the sharp drop-off in business experienced by neighboring jewelers on the historic square. Despite this, the company has no plans to stage larger-scale events elsewhere.

“We haven’t gone down that route because what interests us is being able to make clients come here to Place Vendôme to experience the universe of Elsa Schiaparelli,” she said. “This venue has a very special aura.”

Sales of the fall collection were up more than 30 percent versus the same period a year earlier, and Bellini said she was confident for the year ahead, despite political turmoil in the U.S., which accounts for more than 40 percent of Schiaparelli’s clientele.

The executive said that despite the sharp divisions caused by the election of President Donald Trump, her American customers seem to be taking a wait-and-see attitude. “When we discuss it with our clients, there is no wind of panic and no great euphoria either. The U.S. economy won’t be impacted from one day to the next,” she predicted.

Sophie Waintraub, general manager of Jean Paul Gaultier, is also keeping a close eye on developments in the U.S., one of its top three markets. A strong dollar could help boost European couture houses by making their goods less expensive in foreign currency terms, but social tensions could make wealthy Americans wary of showing off status symbols.

“It’s the big unknown. It’s hard to predict, especially because every time people tried to make a forecast about this U.S. election, the opposite turned out to be true,” she remarked.

Nonetheless, she is confident about the year ahead, with planned events including a new exhibition of Gaultier’s iconoclastic bridal gowns at the Montreal Museum of Fine Arts. “Love is Love” is set to run from May 27 to Oct. 9, but so far there are no plans to take it on tour. The museum’s previous Gaultier show, which opened in 2011, was seen subsequently by two million visitors in 12 cities.

Waintraub reported couture sales at Gaultier were up 10 percent in 2016, despite the impact of the terror attacks in Paris, and she hopes to log another double-digit increase this year. The house recently expanded into Latin America, following Gaultier’s visit to Argentina, Brazil and Mexico in October to promote his fragrances.

“The first half of the year was much more difficult, but we saw a real recovery in the second half, as if clients wanted to make up for the fact that they bought a little less at the start of the year,” she said. “The hallmark of couture is the level of service, so we take our business to them.”