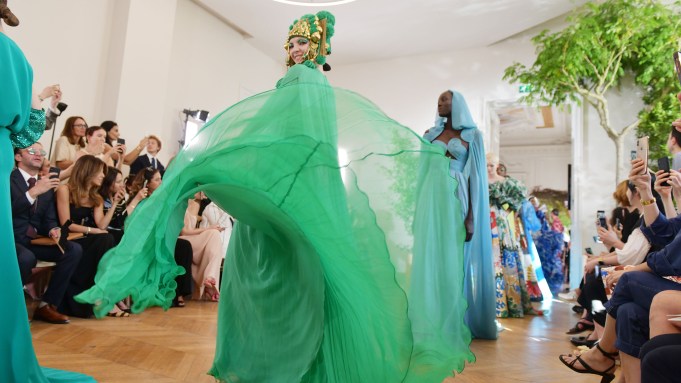 PARIS — Another year, another season of social strife in France.

Paris haute couture week kicks off on Monday against the backdrop of a record-length strike against pension reform that has paralyzed public transport in Paris since early December. While service was expected to gradually return to normal this week, further strikes have been called for Wednesday, Thursday and Friday.

Across town, couture houses have put in place special measures to make sure their collections are ready on time, with many devising shift systems and putting up staff in hotels and apartments.

“We booked a hotel next to the atelier to put up people when necessary, and we also found solutions to ensure this very unpleasant situation does not impact the collection and the teams,” he added.

While the class struggle plays out in the streets, Paris designers will be pulling out the stops to display their most exclusive handcrafted creations.

Among the expected highlights of the week is Jean Paul Gaultier’s 50th-anniversary show at the Théatre du Châtelet on Wednesday night. The designer shocked the fashion community by announcing last week that the show, which promises to be an extravaganza mixing fashion and performance, will be his last.

“But rest assured Haute Couture will continue with a new concept,” he said in a message on Twitter.

Meanwhile, Bouchra Jarrar is returning to the couture calendar after a four-year absence, during which she briefly served as creative director of Lanvin. Julie de Libran, the former creative director of Sonia Rykiel who launched her line of evening dresses last season, is also a new addition to the official schedule.

Parsons Paris will host its first benefit in Paris on Wednesday, during which Alber Elbaz will receive the Parsons Table Award for his work empowering women through fashion. Sidaction will cap off the week with its annual AIDS fundraiser on Thursday.

In another first, members of the public will have access to a show space. Dior has tapped feminist artist Judy Chicago to create an installation, titled “The Female Divine,” for Maria Grazia Chiuri’s show in the gardens of the Rodin Museum on Monday.

The general public will be able to visit the immersive space, shaped like a goddess figure and filled with embroidered banners, from Jan. 21 to 26.

Meanwhile, an exhibition at the Association Azzedine Alaïa juxtaposes the late couturier’s work with that of Cristóbal Balenciaga. Curator Olivier Saillard said the idea for the show, which runs until June 28, originally came from Hubert de Givenchy, who proposed staging it at the Cristóbal Balenciaga Museum in Getaria, Spain.

“He died two weeks later, so we said to ourselves we should absolutely do it,” Saillard said. “We have selected around 60 pieces in a dialogue that I hope will be a little confusing,” he added, noting that even he mistook a Balenciaga jacket for an Alaïa at one point. “I often say that one is the shadow of the other.”

In practical terms, traffic is likely to remain gridlocked despite the gradual return of public transport. Editors and buyers in town for men’s fashion week, which concluded on Sunday after six days of shows, struggled to book taxis and Ubers, with many missing shows and presentations because they were stuck in jams.

Demonstrations risk disrupting the show schedule, too. Guests arriving at the Hermès show on Saturday evening were greeted by protesters chanting slogans against President Emmanuel Macron.

Police armed with batons prevented the demonstrators from forcing their way into the courtyard of the building, but the protest delayed the show, and some guests, including Bob Chavez, president and chief executive officer of Hermès America, never made it in.

Despite the social unrest, Pavlovsky reported that Chanel’s couture activities are thriving, with sales up in the double-digits last season on the back of a strong debut by Virginie Viard, who took after as creative director of the house following the death of Karl Lagerfeld last year.

“Our ateliers are working at full steam,” he said. “Couture has been growing for a few years. We are seeing new, younger customers, thanks to the work of our haute couture teams in various markets.”

And despite the demonstrations across France, which come on the heels of a year of protests by the “gilets jaunes” movement, Pavlovsky believes the City of Light remains a magnet for foreign visitors.

“I don’t think Paris is finished. I think Paris will continue to exist as one of the most magical cities in the world,” he said. “When you go through these hardships on a daily basis, you see it in a negative light, but if you come here for three or four days as a tourist, and you manage to avoid the impact of the strikes, you can experience exceptional moments in Paris.”

For those reluctant or unable to visit Paris, Chanel plans to take its couture collection on tour in Hong Hong, Japan, South Korea, the United States and Britain this year. “Paris mustn’t be taken hostage by these events,” Pavlosvky concluded. “The teams have worked too hard.”