The schedule includes a host of new names and a soupcon of intrigue. 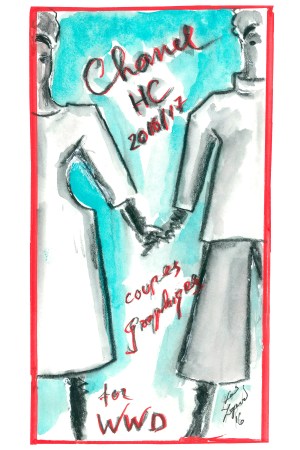 That’s the best descriptor for couture, which continues to defy gravity as France’s biggest players continue to log impressive gains and a host of new players gravitate toward the high fashion week. Francesco Scognamiglio, J.Mendel, Vetements and Giles Deacon are among new names to the week, which starts Sunday afternoon and is crowded with high jewelry presentations, resort showings and fragrance events — as well as couture shows themselves.

Indeed, the runway fireworks are to spill over into destination shows through the weekend as Karl Lagerfeld and Fendi parade their second “haute fourrure” collection in Rome and Pierre Cardin flies the fashion flock to his chateau in Lacoste, France, to parade his men’s and women’s collections.

The week could also be marked by poignant moments at Valentino and Dior. As reported, Valentino co-creative director Maria Grazia Chiuri is expected to end her long collaboration with Pierpaolo Piccioli and join Dior as its seventh couturier. That makes Dior’s fall show a swan song for Swiss duo Serge Ruffieux and Lucie Meier, who have led the studio since Raf Simons exited the house last October.

Sidney Toledano, chief executive officer of Dior, said their debut couture effort for spring registered an increase over the previous season, speaking to the loyalty of couture clients — and to the prowess of the young talents in one of the hottest seats in the French capital.

“The collection had a lot of successful pieces,” he said in an interview.

Dior plans to stage two shows at its Avenue Montaigne salons, with about half of the 500 guests being clients and the venue suggesting that the duo would draw inspiration from founder Christian Dior.

Toledano noted the house had no cancellations and is expecting clients from the U.S., Russia, Middle East, China and Europe. He also highlighted an uptick in Australian clients. “And we expect U.K. clients, in spite of Brexit,” he added.

Dior is also hosting a dinner at Versailles to unveil a new collection of high jewelry by Victoire de Castellane.

Toledano said a direct and personal level of service — and a connection with the house stoked by prestigious events, itinerant shows and heritage displays — helps insulate the rarefied enterprise. Indeed, he said couture is setting the service standards Dior wishes to permeate all of its boutiques, its latest flagships appointed with expansive VIP rooms and even dining facilities for entertaining. They are all part of efforts to build and nurture a local clientele amid volatile tourist flows.

“Couture is very active. People are looking for better service, more made-to-measure products and special relationships — and couture is the pinnacle of that,” he said. “People are expecting excellence. Today’s clients have a cultural life that is bringing them to couture. They understand there is an artistic side. It’s less about status and more about enjoying a piece of perfection, made by fantastic hands and conceived by creative minds.”

Bruno Pavlovsky, president of Chanel fashion, said Karl Lagerfeld’s eco-themed spring collection was “the best one we ever had, in terms of number of orders, number of pieces and number of clients.

“We are still recruiting people in the atelier because we are totally booked,” he said. “In the past two or three years, we have recorded an increase every season. I don’t see any reason not to be able to continue like that, even though we always want to be cautious.”

A pioneer in staging elaborate shows in exotic locales — a resort show in Havana being the latest example — Chanel cultivates many of its couture clients from the ready-to-wear ranks, with Pavlovsky estimating that roughly two-thirds of new recruits are exiting boutique habitués.

He cited an increase in Chanel’s Chinese clientele, in addition to regulars from France, England, Russia, the Middle East and America.

For all the talk about elite fashion customers becoming increasingly impatient, Pavlovsky said couture clients are fine with “see-now-buy-now and deliver later,” understanding that the intricate, labor-intensive garments take about eight weeks to realize.

Giorgio Armani characterized his couture, dubbed Armani Privé, as “a solid part of my business that grows slowly from season to season. The latest collection has specifically performed well, and saw an increase compared to the previous year.”

He also cited “even greater appreciation for unique and personalized items” by “younger customers in certain geographical areas.”

Asked about emerging markets, Armani said that “for our business, some emerging markets continue to represent the areas of great interest, but established markets are a significant part. Diversification and focus are the key elements of my approach to business.

“The Middle and Far East are the markets that perform very well. Russia remains a loyal market,” he added.

The designer acknowledged that attendance could be influenced by travel warnings impacting France, “but I hope that it is not heavily so. The current situation is difficult for everyone.”

Sophie Waintraub, general manager of Jean Paul Gaultier, said the house “managed to keep the momentum of 2015 despite the unstable political and economic situation.”

And “despite the difficult environment, we remain reasonably optimistic. The winter season is very appreciated by our clients and this collection is particularly rich in craftsmanship and certain techniques that only our atelier does,” she added.

Gaultier plans to stage events in Latin America later this year, a new frontier “with significant opportunities” for its couture, and expand its bridal offer, Waintraub noted. “We will be traveling to Brazil, Argentina and Mexico, to bring our craftsmanship closer to the clients.”

For the spring season, the house collected orders from Asia, the Middle East, North America, Russia and Continental Europe.

Delphine Bellini, deputy general manager at Schiaparelli, cited a “significant increase” in orders for its spring collection compared to a year ago. “We expect a continuous growth, especially given the increasing demand for special creations, seats at the couture show together with a growth in requests coming from Chinese customers,” she said. “We depend more on established markets but we have more and more requests from customers from emerging markets.”

American customers and clients from the Middle East are the top nationalities for Schiaparelli and are growing faster compared to European customers, she added.

Donatella Versace said she considers couture her “chance to dream” and to “create the ultimate luxury.”

“But the atelier’s work is all year round; there is so much more as we do so many special designs and pieces throughout the year,” she said. “It’s an honor to make special dresses for incredible women: It’s moments like this that show that couture is more valid than ever before.”

Deacon, who used to show his ready-to-wear label Giles in London, plans to parade about 30 looks in Paris, including “special” daywear pieces, cocktail dresses and eveningwear. Deliveries are set for mid- to late October.

Deacon said the change in his show schedule means that he’ll also have more time to work with private clients who come to him with ideas for what they want to wear. “Being a small company we’re much more nimble and the service we can offer is much more personal,” he said. “We started working on the collection in January and the time frame has been great for fabric development, shapes and fittings. It means the designs can be much more considered for the client.”