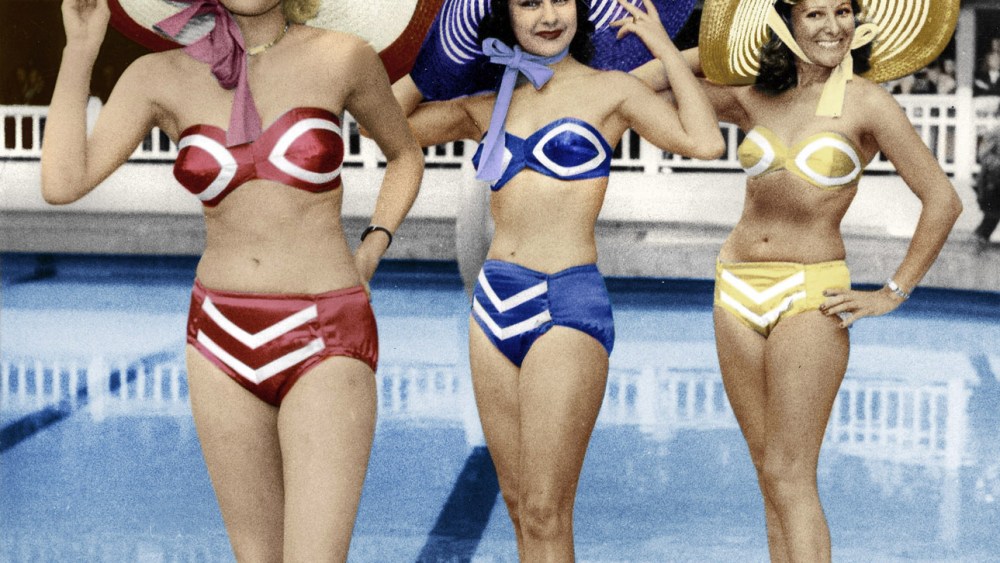 PARIS — The woman stands defiantly on an Italian beach as the uniformed officer writes up a violation.

Her crime? Wearing a bikini.

The photo from 1957 figures in a playful Paris exhibition devoted to the 70th anniversary of the two-piece suit, the invention of late French automobile engineer-turned-designer Louis Réard. It demonstrates that when it comes to swimwear, showing too much skin can cause a furor.

Fast-forward to today and showing too little is the hot topic in France as burkini bans multiply in seaside towns, with Prime Minister Manuel Valls insisting to one local newspaper that the head-to-toe suit is tantamount to “woman’s enslavement” and “not compatible with the values of France and the Republic.”

It opened last month in tandem with a Michel Lafon tome, “Bikini: La légende,” which shows that European bathers in the 19th century wore costumes almost as modest as today’s burkinis.

Timsit cited an uptick in French visitors in recent weeks, which he acknowledged could be linked to media coverage of the burkini controversy, tangled up with tensions over Islamist terror attacks and lingering debate over Muslim clothing.

Some 10,000 posters of Ava Gardner in a lemon yellow bikini plastered around Paris have already pushed attendance past 5,000, besting a Jacqueline Kennedy exhibition last year.

“It’s a popular and exciting item,” Timsit shrugged, acknowledging the draw of such Hollywood stars as Marilyn Monroe, Romy Schneider, Jane Russell and Raquel Welch, who figure among the 70 photos and advertising posters on display.

About a dozen actual bikinis on Stockmans or tacked to walls, including several Seventies numbers bearing the Nina Ricci label, round out the compact display, along with Simplicity and Vogue patterns that document what goes into manufacturing such skimpy attire.

To be sure, skimpy is a relative term. While Réard’s “Sexy-kini” from 1946 was little more than bits of chain and a few nacho-chip-sized triangles of fabric, fuller tops and granny pants were à la mode throughout much of the Fifties and Sixties.

The book and the exhibition notes that the bikini was a flop when it was first unveiled at the Molitor pool in Paris, site of many swimsuit competitions. Yet it would go on to become a worldwide phenomenon, with Timsit pointing to the $60,000 paid at auction for the white bikini Ursula Andress wore in the 1962 James Bond film “Dr. No.”

Just before Réard unleashed his design on July 5, 1946, he had registered the names of several tropical islands, including all the Hawaiian ones, opting for “bikini” after the atoll in the Marshall Islands where the U.S. detonated many nuclear devices.

His swimwear advertising continued the thought declaring: “It will have the effect of a bomb.”