At Les Arts Decoratifs in Paris, the exhibit “Art Deco and Avant-Garde Jewelry” focuses on Despres. 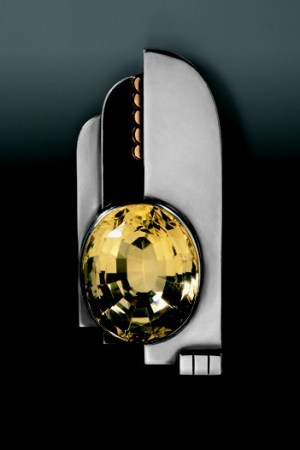 PARIS — Speed was inspiring long before the advent of fast fashion: A jewelry exhibition here at Les Arts Décoratifs that kicks off today transports visitors back to an era when the advent of planes, trains and automobiles triggered exhilarating new dimensions in design.

Dubbed “Art Deco and Avant-Garde Jewelry,” it is billed as the first show ever dedicated to a niche band of jewelry designers who, having bloomed in the Thirties, straddled the Art Deco and Modernist periods. Its protagonists were inspired as much by the cubism, futurism and Russian constructivism art movements as they were by architecture, scientific progress and machines.

The heart of the show celebrates the vast oeuvre of the late French silversmith Jean Després, encompassing jewelry and objects presented in a series of stark cabinets in the museum’s main nave. These include his iconic “motor jewelry” designs that are reminiscent of engine parts, from rings resembling nails or cogs to a brooch in the form of a piston rod.

The designer was influenced by his time spent in the French Air Force during the First World War, where he worked as a drawer of airplane motors. Adding a punch of color, meanwhile, one 1932 gold and lacquer pendant boasting a large honey-colored, faceted citrine is one of several pieces on loan from the private collection of Stephanie Seymour Brant.

Després worked with a range of materials that were new for the era, namely semiprecious stones such as turquoise, coral, lapis lazuli and amazonite.

“Després was more known in the specialist domain. Andy Warhol was an avid collector….The idea was to

open him up to the public,” said Melissa Gabardi, a jewelry historian and Després biographer, who conceived the show along with curators Dominique Forest and Evelyne Possémé, as well as journalist Laurence Mouillefarine.

A series of installations in the site’s accompanying wing, meanwhile, display an array of jewelry designs — some resembling Cubist paintings — by a group of Després contemporaries, including decorator Jean Dunand, Jean Fouquet, Raymond Templier and Jeanne Boivin. Eva Chow and jewelry designer Neil Lane count among personalities to have loaned pieces for the section.

Accompanied by photographs by avant-garde photographers of the period, such as d’Ora and Germaine Krull, some of the pieces boast glitzy former owners. These include a 1934 lozenge-motif platinum, rock crystal and diamond cuff by Suzanne Belperron, which once belonged to Diana Vreeland; a Cartier bracelet made from diamond-encrusted rock crystal discs, once owned by Gloria Swanson, and well an African-style cuff by Jean Dunand seen on Josephine Baker.

The exhibition culminates in a selection of treasures by the period’s Place Vendôme giants, from a 1931 gold bracelet inspired by pointy Chinese hats made by Van Cleef & Arpels for Paris’ Colonial Exhibition in 1931, to a 1934 modernist reversible bracelet by Boucheron.