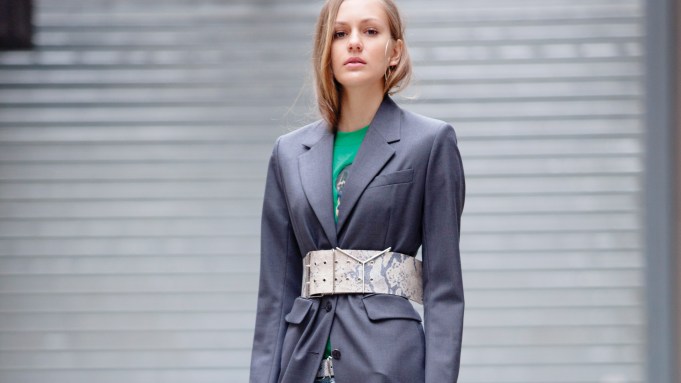 Paris is prepping to embark on the fourth leg of the fall runway marathon, amid soft tourism and heightened security. But the shows do go on. Here are a few fresh faces to keep an eye on during the season.

Businesswoman Ingie Chalhoub launched her namesake Ingie Paris line in 2009, merging her Middle Eastern sensibility with a sense of Parisian chic. Using luxurious fabrics — silk and viscose velvet, wool crepe and loden, silk chiffon, embroidered lace and signature lamé jacquard — and high-quality production, the line is entirely crafted in France, with the exception of its knitwear and shoes, both made in Italy.

Following her Warhol-inspired pre-fall collection, Chalhoub’s fall offering is dedicated to Diana Vreeland — a photo of the famous editor clad in red in her living room is the basis for a graphic, rich red color juxtaposed with black.

The designer is keen to develop some exclusive prints and couture embroideries. This season, she creates watercolor Liberty-style flowers mixed with little hearts and stars printed on silk georgette, or on metallic satin for cocktail and eveningwear, as well as a disco-style jumpsuit.

The newly launched shoe line of stiletto pumps is made with luxe fabrics that match the clothes. With exclusive distribution at Le Bon Marché in Paris, and stores opening in Abu Dhabi and Riyadh this spring, the label is on the rise. Prices range between 2,490 and 4,390 euros, or $2,745 and $4,840, for the most embellished evening styles; coats are about 1,460 euros, or $1,610, and knit tops are 490 euros, or $540.

Flemish designer Glenn Martens, a classmate of Antonin Tron’s at The Royal Academy of Fine Arts in Antwerp, took over Y/Project, a men’s wear label that specializes in leather, in September 2013. He’s turned it into his own medieval-tinged streetwear aesthetic, and gradually added women’s pieces to the men’s line each season. Now, he’s getting ready for a big push with a full runway show on the official Paris calendar. As commercially successful as the men’s lineup, the women’s collection follows the same aesthetic, with plays on texture and shape, but some feminine dramatic effects, such as extralong sleeves on translucent blouses and dresses ballooning at the cuffs; ultralong tailored pants gathered around the ankle with industrial drawstring details, or sculptural graphic necklines and high pleated collars on long dresses. He’ll also offer some of his men’s styles in glitzier versions, such as shearling jackets made of strips of sheepskin in an aluminum foil finish. Y/Project’s women’s line has been doubling its distribution every season, with prices ranging from 175 euros, or $195 at current exchange, for a T-shirt, to 3,500 euros, or $3,895, for a shearling coat.

Antonin Tron, a graduate of The Royal Academy of Fine Arts in Antwerp, who’s been working in Balenciaga’s studio with its three last designers, has been under the radar. “I’ve had this project for a while, but was waiting to find the right manufacturer to finally launch,” he declared. That producer is a factory specializing in jersey, located in northeastern France, where he found the expertise needed to develop his sculpted fluid silhouettes. The line is entirely made with jersey, with some dresses created from intricate patterns twisting and draping with contrasted topstitching constructions, a style the designer described as “structured flou,” citing British designer Jean Muir as a big influence on his work.

The mix-and-match wardrobe of the 38-piece fall collection, made of viscose or silk and cotton ribbed jersey, doesn’t follow any specific theme, but the 31-year-old Tron, a surfing devotee, cited the landscape of France’s Atlantic coast as an influence for his sensual pieces executed in a palette of dusty pink, pebble white and gray-blue, evoking the colors of sky and sea. Prices range from 400 euros, or $444 at current exchange, for a top, to 2,000 euros, or $2,220, for a dress.

Originally, Keiko Onose, owner and designer of The Secret Closet, created a private-label line seven years ago to be sold only in her own four stores, alongside the collections of Céline, Lanvin and Saint Laurent. Now entering the international wholesale market, the line has been renamed Cyclas, referring to an ancient piece of clothing worn during the Middle Ages. With a buyer-to-buyer approach, Onose aims to create a desirable contemporary wardrobe of luxury essentials with modern fit, interesting volumes and a keen attention to quality and details like hand-frayed edges and double-faced constructions.

She wants her collections to be easy-care and travel-friendly, calling them urban uniforms for real life. Though appearing minimalist, with hidden buttons and spare details, her designs are never as simple as they seem, expressing her Japanese sensibility via little twists
in construction for a modern style.

This fall marks the first season Cyclas will offer denim and shoes, such as mink slippers and sandals.

Particularly focused on comfort and texture, her cashmere knits have a mink fur touch achieved via a special brushed treatment making the sweaters ultrasoft and slightly fluffy.