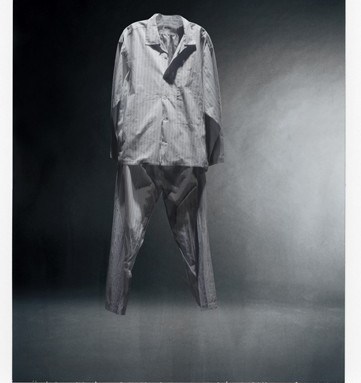 SKIN IS IN: Etam will stage its own skimpy take on “Puttin’ on the Ritz” on Monday, with its second Paris catwalk show over the Ritz hotel’s covered swimming pool. On parade will be the brand’s spring collection as well as the latest offerings from the Natalia for Etam line, designed by Natalia Vodianova. Following the event will be a dinner and concert by Mark Ronson at the Hôtel d’Evreux, on the Place Vendôme. Guest performers are said to include Charlotte Gainsbourg and Rihanna. George Clooney and Hilary Swank, meanwhile, will reportedly be among guests invited to the event, which is to be screened live on Etam’s catwalk site, defile-etam.com.  — Katya Foreman

SOMETHING OLD, SOMETHING NEW: Forget the cat’s pajamas. How about Alber Elbaz’s? That was designer Anne Valérie Hash’s thinking for her latest adventure: an artisanal collection based on reworked garments donated by personalities. “For me, it’s a new take on couture,” said Hash, about crafting something new out of existing treasured pieces of clothing. Along with Elbaz’s PJs, Hash has taken her scissors to items including Tilda Swinton’s favorite T-shirt; a striped Breton T-shirt from Jean Paul Gaultier; an evening jacket belonging to Charlotte Rampling; an old Chanel jacket from Daphne Guinness, and an Alaïa frock belonging to Bettina Rheims. The resulting collection of looks, Act I of what Hash hopes will become a yearly installment, is to be presented at the designer’s headquarters on Monday [Jan. 25] before traveling on.

OFFICIAL APPOINTMENTS: For the first time, a selection of Place Vendôme high jewelry brands on Thursday will show — by appointment only — as official members of the Chambre Syndicale’s haute couture calendar. Participants include Chanel, Mellerio dits Meller, Van Cleef & Arpels (whose collection centers on a butterfly theme) and Boucheron. The latter’s Inspiria line comprises 20 “phantasmagoric” pieces honoring the 25th anniversary of the Cirque du Soleil. — K.F.

FOOD FOR THOUGHT: Gourmets have an ever-larger choice of eateries to pick from, thanks to several recent openings in Paris this season.

For meat lovers, Charbon Rouge, a steakhouse off the Champs Elysées on Rue Marbeuf, offers a great selection of meat. American, Argentinean and Japanese beef is served in a spacious and contemporary two-story space. Average price for dinner for two without wine is 80 euros, or $115 at current exchange.

A few blocks away, off Avenue Montaigne, Orient Extrême Montaigne is a convivial yet slick 52-seat Japanese restaurant with an open kitchen serving classic and fusion Japanese cuisine. Cold and warm salads are available, as well as lunch menus starting at 23 euros, or $33, including miso soup and sushi or sashimi. For dinner (75 euros, or $105), the menu offers a wide sampling of the chef’s specialties.

Across the Seine, Toyo, a chef who cooked privately for Kenzo Takada for seven years, prepares a daily menu at his elegant eponymous Japanese restaurant. Fried smelt, half-cooked scallops, fish curry and green-tea tiramisu are available on a 55 euros, or $78, dinner menu.

In the Marais, on the Rue des Blanc Manteaux, Claude Colliot serves tasty and creative French cuisine in his friendly eponymous 50-seat restaurant. Various fresh products are available every day, such as shellfish in a ginger sauce, grilled sea bass with kumquat and duckling with candied turnips. Desserts include pineapple infused with tobacco oil and served with black-tea ice cream. Dinner for two without wine costs around 110 euros, or $160.

NO FRILLS: Getting back to basics, Spanish luxury house Loewe will present its Loewe Leather Icon Collection on Monday during a cocktail party at its Paris headquarters on Rue François 1er. It’s a new permanent line of men’s and women’s leather wardrobe staples. The all-black 20-piece collection made from napa leather and sheepskin that features raw-cut edges will enter stores in July and be updated every few seasons. Prices range from $1,400 for a zipped pencil skirt to $6,000 for a trench. “It’s kind of that thing where sometimes in a collection you cover everything but the essentials….The idea is also that you can come back to the store in two years and still find the same pieces,” said the label’s creative director, Stuart Vevers, who plans to add seasonal capsule collections twice a year. A touring trunk show will allow customers to order pieces in up to 20 colors, providing a kind of bespoke service.