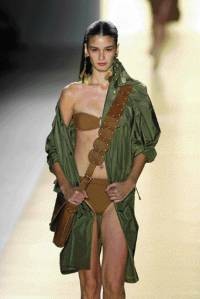 The message was clear: Pack your bags and get ready for adventure. Emanuel Ungaro’s Giambattista Valli moved to a Spanish beat, while Michael Kors took Céline to Goa via the entire planet and Jean Paul Gaultier explored his own rich, imaginary world. Karl Lagerfeld, for his part, did tons of denim — all super-skinny, of course — for Lagerfeld Gallery.

Emanuel Ungaro: Transition is never easy, especially when a designer takes the reins from the hands of a master. That has been the case with Giambattista Valli, former assistant to Emanuel Ungaro, who one year ago took on the role of designer for ready-to-wear, and had to struggle to find his own voice. The collection he showed on Friday indicated that Valli has worked through that very difficult process, and is ready to carry the house into the future with security and confidence. He made clear both his devotion to his mentor’s heritage and his point of departure. It worked beautifully.

Valli kept the exoticism and eccentric romance for which the house of Ungaro is known, while tempering its more elaborate manifestations. Throughout, Valli played to a Spanish beat, with hints of flamenco in tiered ruffled dresses and others cut asymmetrically for a show of shoulder and leg. He loves gentle fabrics that fall off the body — his preferred silks came in florals or delightful black-on-white polkadots — and showed them in a myriad of dresses and little tops over lean pants bunched at the ankle.

But not even the most die-hard romantic wants to be all frills all the time. When it’s time to show off her strong side, she can slip into a matador motif in finely embellished boleros that topped pants and dresses. And luckily, while they played to a toreador mood, Valli’s cool control kept them chic rather than costumy. Olé!

Céline: Michael Kors’ Céline girl is an experienced traveler, forever rushing off to destinations unknown, a spring in her step and dressed with bohemian romance and jet-setting pizzazz. With two words printed on the spring show notes — “Veruschka voyage” — Kors evoked a world of possibilities where this free-spirited type might roam. She’s off to Goa, to Nairobi, to who-knows-where, maybe even the office.

And just what might this mythical modern Veruschka pack for the trip? The best finds from safaris and spiritual journeys gone by, of course. From Capri came her swirly printed retro bikinis, held with golden horseshoes instead of rings. By way of India came a bright pinwheeling tie-dyed babydoll dress, gold embroidered satin jackets and pencil skirts in army green, orange and pink and the gauzy scarves Kors worked and reworked to brighten nearly every look.

All along the way, Kors updated traveling classics, showing plenty of lean tank tops, a crinkled cotton and metal trench coat, silk cargo pants and a bolero jeans jacket in army green. But even when she’s packing light, the Céline girl won’t leave without a slinky cocktail dress — or even two. After all, adventure comes in many forms. Kors’ simple black minidress with a twisted bodice and gold straps or stretchy — and packable — dresses flecked with gold are just the SST ticket.

Jean Paul Gaultier: Jean Paul Gaultier’s imaginary world is a strange and wonderful place to visit. At his spring show, pretty trapeze artists swung, twirled and fluttered like songbirds trapped in a dream sequence, as some of the most imaginative clothes around paraded by. Gaultier is a master exaggerator who knows how to take his ideas to the brink with humor and skill, all the while maintaining the precious tradition of Parisian chic.

And if, over the past year, inseams have shrunk, with jeans makers selling scandalously low-riding fare, leave it to Gaultier to do them all one better. His low-riding pants rode lower-than-low — past the point of no return and well below the panty line — all the better to reveal a girl’s sassy briefs and lacy peace-sign tights, my dear.

Non-pants pants not your thing? Well, Gaultier had plenty of other innovative clothes in store, the best of which worked a smart-but-sexy angle. There were bright, sculpted chiffon minidresses, skinny pants worn under apron-like denim skirts and men’s shirts worn back-to-front as wacky halter tops.

Of course, Gaultier also knows how to give the mundane an exotic turn by merging his ideas into terrific hybrids. Out came the kimono-cum-boxing robe, a chinoiserie-printed track jacket and Indian-inspired scarf gowns that wended their way over and under track shorts and bikinis.

If some of it seemed a little unrealistic, it certainly looked great on the runway. And the collection was filled with important pieces that fashion-savvy women can put together in their own special style.

Lagerfeld Gallery: While Lagerfeld Gallery may have meandered a bit since the label’s conception, when it had a more arch, arty feel, Karl Lagerfeld has now found the groove. The line is younger and a lot more fun, merging street smarts with the haute chic Lagerfeld knows so well.

After striking a deal with Diesel last season, the designer put a load of cool jeans on the runway, and this time around there were plenty more. Pale blue faded denim was streaked a watery pink and cut into skintight overalls or a slim pair of capris to wear under filmy petal-pink chiffon minidresses. Lagerfeld’s sporty summer suit matched a lightweight lavender blazer with a pinkish denim bustier and HotPants, while scores of cheeky denim shorts were shown under Lagerfeld’s lavender spangled eveningwear.

But the sprightly lineup also included styles modeled on Lagerfeld’s own look du jour. Since he lost weight last year, the designer has worn a black jacket, tuxedo shirt and jeans unfailingly. So when he approached tuxedo dressing this time around, it was with the casual flair of an expert. Slinky miniskirts or denim capri pants were paired with shrunken dinner jackets, high-collared tuxedo shirts and proper waistcoats, giving models a nifty look just like their guy Karl.