The heiress hit the runway at India Resort Fashion Week. 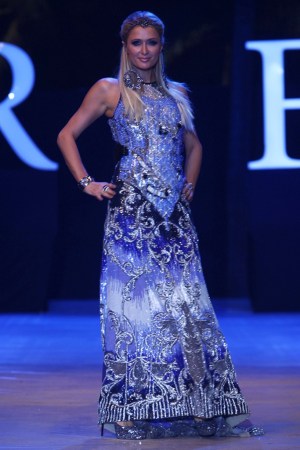 GOA, India — Spotting American heiress and businesswoman Paris Hilton on the ramp at a fashion week in India had an unexpected, high-level response, giving resortwear design in India a fillip as she later talked about expanding her fashion brand throughout Asia.

Hilton was walking for designers Shane and Falguni Peacock, who have been showing at New York Fashion Week the past several seasons and have designed for Lady Gaga, Britney Spears and other celebrities.

The show was part of India Resort Fashion Week, held here from Nov. 28 to Dec. 2 at Candolim Beach, within the setting of a fashion village.

It was the second edition for the fashion week, which attracted other well-known designers like Rocky-S, Narendra Kumar and James Ferreira.

“Indian designers can do resortwear with their eyes closed — it’s something that comes naturally to them,” remarked Fern Mallis, formerly vice president of IMG Fashion.

Although buyers did not seem to be the focus, it was clear that the identity of the fashion week was slowly emerging. “You can’t go wrong with this theme,” said Kumar.

Mallis said she liked the designs of Pria Kataria Puri and Asmita Marwa. “People always ask me where I got my clothes from and these are my collections from some wonderful Indian designers. You can’t get this stuff anywhere else,” she said.

Although the focus was resortwear, the clothes were often smartly tailored and dressy, more for destination weddings, events and with the “festive” themes that Indian designers often keep in mind.

Rocky-S, in keeping with his normal flamboyant style, played with net and black, form fitting outfits.

“We’re going to be doing this for a long time,” said Amit Patel, global head of E-Sense Entertainment Pvt Ltd, one of the partners that organized the event, who introduced Hilton at a press conference here. “We have picked a niche within the Indian fashion industry and have big plans to take this global. We are under discussions to take IRFW to Dubai, Monte Carlo, Marbella, Barcelona and Miami.”

Meanwhile, Hilton has her sights set on further expansion in India and beyond.

“Asia is one of my biggest markets,” Hilton, who was making her second visit to India, told WWD.

She visited the country last year to launch her first store when Paris Hilton accessories were launched in Mumbai. “I’m looking to expand more in India in 2013. I already have stores in the Middle East and many other parts of Asia,” she said.

Although the Hilton brand of fashion and fragrance has not been launched in India yet, she said the biggest seller in Asia and the Middle East has been handbags, which always “make a statement,” followed by sunglasses. “They are both my personal favorite [categories], too,” she said.

Hilton said that despite the different categories of business she is in she manages to “focus on everything.” Her 15th fragrance, Dazzle, created by perfumer Frank Voelkl, was launched earlier this year and there are 42 Paris Hilton stores worldwide. It has been estimated by media reports that her 17 different products including handbags, watches and shoes bring in more than $10 million a year in revenue.

Changing into several different outfits in the course of the afternoon, all by Shane and Falguni Peacock, Hilton commented: “I love fashion, being a designer myself, and I like Indian fashion especially. I’m definitely very inspired by Shane and Falguni. Their dresses are very beautiful.”

But all of these activities have not shaken the core. “I’ve always looked up to my father and grandfather. I’m starting a Paris beach club and also boutique hotels. It’s in my blood,” she said.