Paris in the Springtime

Paris' top spring collections based on the number of Style.com page views during the first 12 days they were posted online. 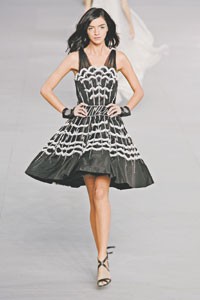 Paris’ top spring collections based on the number of Style.com page views during the first 12 days they were posted online.

1. Chanel
Page views: 2,353,065
Karl Lagerfeld’s Chanel collection was a mix of women’s wear for spring. Jeans, tweeds and fedoras were sprinkled into the show, which also included a major exploration of shorts. Later came “suits in blinding brights, party frocks and on and on,” said WWD.

2. Louis Vuitton
Page views: 1,595,462
The celeb-fest was in full force for Louis Vuitton — everyone from Winona Ryder to Sharon Stone stopped by. And as terrific as the clothes have been, “handbags steer the Vuitton ship, and no one knows that better than [Marc] Jacobs,” said WWD.

3. Balenciaga
Page views: 1,589,000
“C’est magnifique!” said WWD. “Nicolas Ghesquière exploded the Paris season into a flurry of fabulousness.” Sack dresses, skinny jackets and jeans, along with T-shirts that read “Devils in Balenciaga” were all part of the rocker chic collection.

4. Valentino
Page views: 1,534,362
Valentino’s collection included a black-and-white opening passage full of the clean-cut shapes that made him famous. Standouts included kimono jackets and gowns covered in flowers, and a white gown with crystal straps that was perfect for evening.

5. Chloé
Page views: 1,444,103
“Phoebe Philo is one of the hottest, most-copied designers in fashion, having infused girlish dressing with a whole new savvy,” said WWD. She showed pristine white frocks — confections in linen, organza and metal gauze with embellishments.

7. Alexander McQueen
Page views: 1,276,650
For spring, McQueen stated, “Power dressing. I’m bringing sex back to the market.” Yet some of the collection was too aggressive, said WWD. The tailored looks fell short. Nevertheless, jersey dresses and a white column dress were hits.

8. Yves Saint Laurent
Page views: 1,160,296
Stefano Pilati’s preferred silhouette for spring: “Clean and lean with an Eighties cast to the cut, with demonstrative frills softening the inherent precision.” The most successful revelations were the toreador pants with ruffled shirts and little jackets.

9. Stella McCartney
Page views: 1,133,126
McCartney’s collection was sophisticated and classic. She opened with a blazer over pale gray pants, along with a lavender shirtdress. Evening revealed cocktail dresses, some adorned with prints straight from a painting by Jeff Koons — who attended the show.

11. Hermès
Page views: 1,005,697
It was a subdued showing for Jean Paul Gaultier’s Hermès collection this season. Beginning with a white draped shirtdress, he showed suede jackets and a host of colorful cardigans. “The collection lacked that essential spark of personality,” said WWD.

13. John Galliano
Page views: 819,036
Everyone is beautiful. That was Galliano’s approach this year. Instead of leggy models, he used older women, twins, some glams, cross-dressers — you name it. “The clothes? Beautiful. But they made for a mere sideshow to the main event,” said WWD.

14. Viktor & Rolf
Page views: 761,985
Viktor Horsting and Rolf Snoeren presented an entirely backward show. When the lights went down, out came the designers for their final bow, followed by their models. Then the clothes: Gowns were twisted and suits morphed jacket sleeves into pant legs.

15. Rochas
Page views: 757,605
Olivier Theyskens revealed a lineup of gorgeous gowns with curves, trains and embellishments. Though evening has been his primary focus, he also introduced day wear, including pantsuits in washed fabrics worn with simple, feminine blouses.

17. Celine
Page views: 613,599
New Celine designer Ivana Omazic packed in dozens of exits, and many looked quite good. Among the show’s strengths: the snappy sportswear and the soft, pleated-front voile shirtdress. “But such is not enough to carry a collection,” said WWD.

18. Givenchy
Page views: 602,328
Riccardo Tisci brought out an influx of zombie-dominatrix hybrids who moved mechanically around. “Which is too bad,” said WWD, “Some of the clothes were really good, suggesting a creator who could develop his craft into a serious business.”

19. Vivienne Westwood
Page views: 538,898
The collection was based on Westwood’s signature disheveled look. She revealed T-shirts with sayings such as, “I’m not a terrorist. Please don’t arrest me,” or “Branded.” Westwood’s easy knits and tie-dye frocks were well-received.