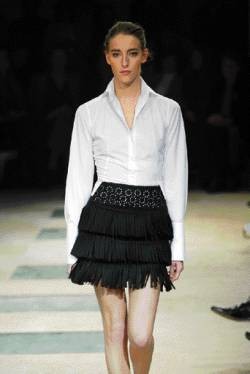 Fantasy may come in seemingly infinite variations, but there are plenty of ways to create real clothes for real women, too. The Paris spring collections drew to a close with two versions of the latter notion: Ralph Rucci’s precisely constructed Chado couture collection and Azzedine Alaïa’s fabulous ready-to-wear show.

Azzedine Alaïa: If there’s a lesson in this week’s couture collections, it’s that real clothes can indeed be as captivating as the most fanciful reveries. Azzedine Alaïa drove home that point on Thursday afternoon when he brought the shows to a close with a spectacular collection. True, Alaïa’s was a ready-to-wear showing, but the week’s other theme was the continued blurring of the line that separates the two. Before his Chanel show, Karl Lagerfeld questioned the need for more than two or three couture houses, because of the emergence of luxe rtw. Donatella Versace distilled her presentation to 10 major evening looks, seeing no need to redo in couture that which a woman could get in rtw, and two highly inventive noncouturiers, Alaïa and Yohji Yamamoto, bookended the week.

Alaïa could not have delivered a more beautiful finale, and an impressive industry brigade turned out to savor it — Miuccia Prada, Yohji Yamamoto, Sidney Toledano, Manuel Puig, Martine Sitbon, Adrian Joffe. They saw day clothes of substance in which youth and maturity can both feel at ease. Cut with a bravura tempered by restraint, they radiated sophistication: strong, impeccable tailoring in felted black, its austerity lightened by crisp white shirts. The striking jackets and coats only gained intensity in back, where Alaïa split a fringed edge into a crossover detail, or appliquéd a crocodile tail down the length of a coat — stunning. Part of Azzedine’s brilliance lies in the way he works past glories to au courant effect. Thus, neither the leggings-with-stilettos (fabulous, of course) nor the fringed minis bore a trace of retro, while the presence of Naomi Campbell and Stephanie Seymour made us wish that they made more frequent cameo appearances.

For evening, Alaïa maintained his bird’s-eye focus with linear black gowns detailed with hardwear — an endless spiraling zipper, prominent chain links. He also broadened the range with some not-quite-ethereal white dresses with miniature cutouts, and a multicolored chiffon, veiled in black. It all added to an expression of a highly refined vision, delivered with precision and eloquence. And if that’s not haute, what is?

Chado Ralph Rucci: Reverence, respect, integrity. Ralph Rucci’s program notes list those three qualities as elements the designer wants “to explore through his clothes.” Lofty and laudable, but Ralph, might we suggest a fourth — a soupçon of fun? There’s nothing wrong with taking a serious approach to clothes, especially when women are shelling out big bucks, and clearly, Rucci has built up a dedicated base of mature clients. They appreciate his pride in their patronage, when too many other designers take their money and run to court the young socials. But reverence is not always a virtue, especially when left untempered by wit, humor, irony — or even a few easygoing fabrics — and the collection Rucci showed on Wednesday was the fashion equivalent of the Latin High Mass.

Which is too bad. Rucci is a designer with a vision, an eye for detail and considerable skill. He puts painstaking care into fabric research and development, and never takes the easy way out with a pattern. He cuts and seams to a fare-thee-well, and even the simplest of his jackets has the swagger of the secure. For spring, he engaged in an Asian moment, working origami and obi effects into sportswear shapes with a decided — and probably unintentional — retro feeling. By day, almost all of the clothes looked precisely constructed, which worked for a garden-party-fresh embroidered white skirt, though the lineup of stiff jackets and pants grew tiresome. At night, he softened up a bit, and the results were sometimes lovely, notably in a taupe chiffon gown with a braided bodice.

But for the most part, Rucci’s collection felt too repressive, bogged down by self-conscious fabrics, by a designer’s technical skill turned tricky, and, most of all, by pretension.