Paris Lingerie Preview: Causing A Flap… Round and About…

Fashions from the Roaring Twenties are alive and well at the Galliera fashion museum in Paris.

By Chantal Goupil and Allegra Farina and Christine Cheng and Meredith Batastini on December 3, 2007
View Slideshow 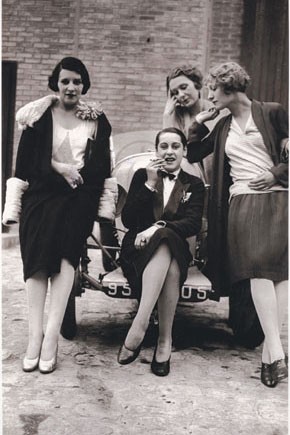 Fashions from the Roaring Twenties are alive and well at the Galliera fashion museum in Paris. Its current exhibit, titled “Les Anées Folles: 1919-1929,” showcases a fecund time when such major talents as Coco Chanel, Jeanne Lanvin and Paul Poiret emerged.

The era was defined by movement, as planes, trains and automobiles proliferated, and movement also characterized the status of women as they participated in sports, fought for the right to vote, danced the night away in clubs and experimented with gender-bending styles, such as chopping off their hair and wearing men’s accessories like bowler hats and bow ties.

Highlights of the exhibition include drop-waist dresses in silk or lamé, adorned with feathers, embroidery, lace, jewels and sequins, along with equally ornate accessories. Activewear also emerged during the period, seen in whimsically knitted swimsuits, a sleeveless cotton tennis dress, wool ski suits and, for zooming around town, a leather Hermès driving cap.

With videos, projections and photographs showing women dancing to jazz, skiing, playing tennis and carefully spraying perfume, the exhibit, running through Feb. 29, presents fashion and accessories as evidence of an extraordinary time in which women were clearly on the move. Musée Galliera, 10 Avenue Pierre 1er de Serbie, 75116
— Meredith Batastini

ROUND AND ABOUT
After stops in New York, Tokyo, Sydney and Abu Dhabi, United Arab Emirates, “Pearls: A Natural History” is making its European debut at Paris’ National History Museum, with new additions from French scientists and designers.

The exhibition, running through March 10, explores the biological and ecological history of pearls, from their therapeutic qualities to their popularity in the worlds of fashion and jewelry. On display are more than 300 pieces, including earrings owned by Coco Chanel and a 1915 Van Cleef & Arpels brooch. Alongside designer pieces from Cartier, Lanvin and exhibit sponsor Mikimoto are an Art Nouveau pin designed by Fouquet and Marie Antoinette’s set of pearls. Musée National d’Histoire Naturelle, 57, Rue Cuvier, 75005
— Allegra Farina

AFTER DARK
Finally, a restaurant for Paris night owls. Called Le Lup, it just opened in Saint Germain des Prés, serving from 10 p.m. until 5 a.m. Spread over three levels, with the dining room upstairs and the cocktail bar on the lower level, the atmosphere is boudoir-like and cozy. On the menu: classic French food as well as pasta dishes and hamburgers. Le Lup, 2/4 Rue du Sabot, 75006; +33-1-4548-8647
— Chantal Goupil

GOING FOR BAROQUE
Tucked away on one of the oldest streets in the Marais is one of Paris’ hidden treasures: the Musée Cognacq-Jay, which features the collection of Ernest Cognacq, founder of the Samaritaine department store.

Housed in the historical Hôtel Denon, the museum is a celebration of Rococo fantasy. The intimate wood-paneled rooms are filled with drawings and paintings by Fragonard, Watteau and Chardin and feature an extensive collection of Louis XV and XVI furniture, including the bed of 18th-century style icon Marie Antoinette. The collection’s more diminutive highlights include exquisite objects d’art, such as a perfume spraying pistol ornamented with gold and pearls, enameled snuff boxes and a leg-shaped, diamond-encrusted cigarette case. Hôtel Denon, 8, Rue Elzévir, 3rd arrondissement
— A.F.

With more than 15 years working in the marketing departments of such venerable names as Guy Laroche, Lalique and Chanel, Xantapoulos aims to provide the same personalized attention as luxury’s biggest players. A coloring table and goblet full of lollipops keeps kids entertained while the jazz soundtrack gives the 375-square-foot space a lounge feel. The minimalist white decor highlights the carefully assembled outfits.

Xantapoulos orders just one of each size/color and never reorders. Appointments are available, but not necessary, for a more personalized experience. Little V.I.P., 1 Rue Saint-Simon, 75007; +01-4222-0504
— Christine Cheng