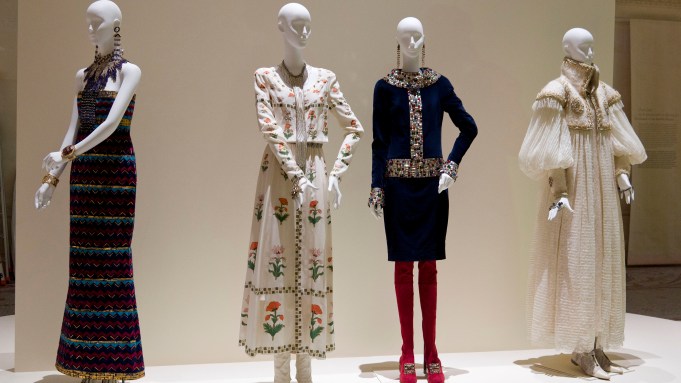 In a world where Costa coffee shops serve “luxury scones” and Amazon.com unfurls seven pages of “luxury foot cream,” to the rescue comes Les Arts Décoratifs in Paris with a fascinating and deep dive into shifting definitions of luxury over millennia.

The sprawling and eclectic exhibition employs everything from a spoon to a car to explain how objects and pursuits have accrued that special distinction, though many items on display — masterpieces from the museum’s collection, as well as the Louvre, the Bibliothèque nationale de France and the Musée du quai Branly — are almost self-evident as luxury, breathtaking in their rare materials, design and haute craftsmanship.

Even the few dozen fashions on display — from a weathered red velvet coat from the 1600s to current-season Jacquemus — tell a tale of shifting tastes over time, from ornamental splendor to austere design.

Two 18th-century men’s frock coats displayed side by side, one in an ornate brocade, another in simple cotton, show how conceptions of luxury changed over the space of about 40 years, for example.

The exhibition also recounts how museums are, in fact, repositories of luxury objects, along with archeological, state and religious treasures. Indeed, the ancestors of modern luxury including Cristofle, Cartier and Hermès were among the original founders of Les Arts Décoratifs in the late 19th century, noted Olivier Gabet, director of the museum and co-curator the exhibition along side Chloé Pitiot.

During a walk-through on Monday, Gabet explained how the history of the world can be recounted through luxury objects, though many things considered luxury can be immaterial, including the freedom to travel — remember that? — or time itself, that idea announced with the Marc Newson hourglass that opens the show, exalted within a soaring blue column curtained in gold.

The 100 or so objects — including furniture, tableware, jewelry and textiles — reflect the museum’s dedication to all decorative arts, and several rooms are being thrown open to the public for the first time, including a gobsmacking room encased in intricately carved wood in an Art Nouveau style.

While organized roughly chronologically, there are winks back and forth in time, and visitors are encouraged to draw their own conclusions about luxury once they understand the historical dimensions, Gabet stressed.

For example, a custom Louis Vuitton trunk for a gentleman’s shoes from the late 1800s — the ultimate in luxury travel cases — is the precursor to today’s Rimowa x Supreme rolling aluminum suitcase, with the added zing of streetwear cool, he noted.

Displays also touch upon — or prompt discussion about — current topics that are impinging on luxury, such as ecology, diversity and cultural appropriation. Sponsors include the European Confederation of Flax and Hemp, which provided some of the spectacular wall coverings in linen, prized for its durability and for needing far less water than cotton, along with the French luxury goods association, Comité Colbert, and Japanese jeweler Tasaki.

The oldest objects in the exhibition — here a a silver vessel from Iran depicting a ram’s head from 800 B.C., there a bronze mirror from Greece circa 450 B.C. — are marvels of craftsmanship, refinement, longevity and enduring beauty.

So, too, is the 16th-century spoon, composed of an ornate silver handle attached to a clam shell, or the gleaming modernist silver samovar by Joseph Hoffman, circa 1904.

“Sometimes very typical, everyday objects were luxury,” Gabet noted. “A luxury object is also something you keep, you repair and you conserve and transmit future generations.”

To wit: one vitrine juxtaposes a vintage Kelly bag in crocodile, mended multiple times, with a rustic bowl whose chips and cracks were repaired with gold lacquer, reflecting the Japanese “kintsugi” technique that makes broken potter even more precious and luxurious.

Many objects throughout the exhibition demonstrate that simple or even poor materials can be considered luxury, from a Helmut Lang paper dress from 1991 to a dazzling vase from 1924 made of eggshells.

Tarot cards and backgammon boards, each marvels of artistry and craft, demonstrate how leisure was a luxury in the 16th centuries. Even knowledge was considered a luxury around that time, when only upper classes had time and money to delve into science with dazzlingly detailed compasses and other mathematical instruments, Gabet explained.

Many of the objects on display were at one time featured at Universal Expositions, including an imposing Cristofle art vase from 1878, a sumptuous cashmere shawl with paisley patterns from Scotland dated 1825, and a Charles Frederick Worth gown from 1885 that marked the birth of haute couture in Paris — and demonstrated a craze for tiny waists.

Fashion fans will find plenty to salivate over, including rolls of intricate lace from the 18th century, four spectacular dresses from Chanel Métiers d’art collections by Karl Lagerfeld and an 1807 Breguet pocket watch that is a marvel of minimalism.

Key photo ops include a 1925 Hispano-Suiza — the hulking car favored by the likes of Pablo Picasso and Gabrielle Chanel — a Tiffany window display from 1957 by Jasper Johns and Robert Rauschenberg marking the arrival of art on the luxury scene, and two gobsmacking ball gowns by Guo Pei and Balenciaga by Demna Gvasalia.

“Luxes” opens to the public on Thursday and runs until May 2.