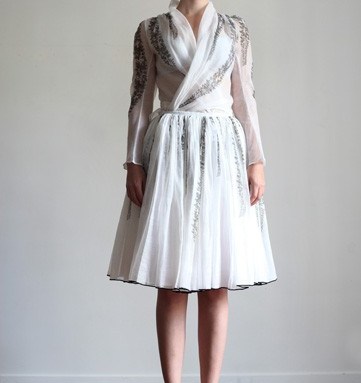 Thierry Colson
Encouraged by the success of his summer 2011 cruise collection, which was distributed by Opening Ceremony in the U.S., French designer-cum-fashion-editor Thierry Colson this season is taking to the catwalk. Colson will show on Oct. 5 at the Angelina tearoom in Paris. His romantic creations evoke French Classicism, often using handcrafted Indian fabrics. Inspired by French Orientalist paintings of the 19th century, highlights this season include a wisteria print on a gauzy white wrap top; shirtdresses in crisp, striped cotton men’s shirting fabrics, and caftans in sensual Indian gauzes. Colson’s muse could be a mix of Marie Antoinette, Josephine and Talitha Getty.
— Laurent Folcher

Corrado De Biase
Having trained as a shoe designer and collaborated on footwear lines for Fendi, Yves Saint Laurent and John Galliano, Corrado De Biase approaches clothing construction in a similar way to designing accessories. His first women’s wear collection was presented in Rome during couture week in July, at the invitation of his old boss, Silvia Venturini Fendi, and will be presented in Paris on Sept. 30 at the Salons Favori, 233 Rue Saint-Honoré in the 1st arrondissement. De Biase has added a few ready-to-wear pieces, with a full collection in the pipeline for fall. The Italian designer’s different approach can be seen in his experimental silhouettes that partly cover the body, pieced together with sections of industrial felt and organza. Hardware includes chunky black zippers and big snaps stitched with contrasting fluorescent threads.

De Biase’s obsession for Pierre Cardin emerges in stiff futuristic pieces with puzzle constructions. Cutouts give a nod to the Memphis design collective formed in Italy in the Eighties, notably the work of Ettore Sottsass.
— L.F.

Benoît Méléard
Some will remember Benoît Méléard as one of the first footwear designers to explore the kind of extreme shoe shapes today favored by the Lady Gagas of the world. The designer, who worked at Robert Clergerie and then Charles Jourdan in the Nineties, collaborated with Helmut Lang, Jean Colonna and Jeremy Scott before launching his own line in 1998. Having since slipped off the radar, Méléard is back with a more purist collection, due to be presented at the Hotel Costes Oct. 3 and 4.

Mus
Entering its second season, Mus, the high-end travel knitwear line founded by Myriam Ullens, has tapped designer Véronique Leroy to collaborate on the line. Their first collection will be presented at Palais de Tokyo on Oct. 2, following Leroy’s show. The pair studied together in Belgium, where they’re from. Leroy said the great thing about working with knitwear is that you can create your own fabric from the yarn and experiment with textures. For example, she can create a terry-cloth texture, fluffy tweed or double-faced jacquard jersey, as seen in the line’s more urban reversible pieces.

Produced in Italy, the collection focuses on timeless wardrobe pieces, with Mus classics to be revisited each season. Spring includes some sharp urban daywear elements, while covetable resort looks include a terry-cloth robe, poncho and swimsuit. The label’s ultraluxe travel kit includes a macro cashmere cardigan that doubles as a blanket. Next season will see the addition of leather items.
— L.F.

Mal-Aimée
Designers Leonie Hostettler, 25, and Marius Borgeaud, 27, met while studying at the University of Art and Design in Geneva, but the pair’s strong chemistry really developed while working together under Olivier Theyskens at Nina Ricci. The design duo went on to form Mal-Aimée, which, lifted from a term associated with dark romanticism in French literature, translates literally as “unpopular person.” Far from brooding sensibilities, however, the label’s high-impact Eighties-inspired debut collection fuses bold shoulders with complex architectural hourglass constructions on tight frocks, bodysuits and leggings. Inspirations include Eighties Thierry Mugler and robots from “Transformers.” Details include metallic stitching echoing Art Deco grid motifs. High-waisted, carrot-shaped denim pants or sexy shorts give more of a street flavor, while the label’s softer side emerges in a line of romantic — and more commercial — flowing frocks.
— L.F.

Ghadah Paris
With the launch of her brand in 2005, Paris-based designer Ghadah Al Rashid set out to offer a younger, sophisticated alternative to the overcharged couture designs favored by her peers for weddings and special occasions in Saudi Arabia, where she grew up. This season, the designer, who in 2007 tapped Laurent Mercier as Ghadah’s artistic director, will present the brand’s first full daywear collection, from Oct. 3 to 7 at the Hotel Westin. Mercier oversaw the development of the line.

“It’s for the modern working woman, offering something chic and elegant but easy and simple,” said Al Rashid, adding that the range includes pants, skirts, jackets and shirts that can be mixed together in high-end fabrics. The brand counts around 25 points of sale, including Harrods in London and Le Bon Marché in Paris, with 15 new doors to be added over the next few months. Brand manager Laurent-Marie Affre confirmed Ghadah is currently readying entry into the U.S. market.
— Katya Foreman

Having launched a small line of tailored coats for this fall, Julien David, who started his label two years ago with an eponymous collection of luxury silk scarves, this season has added a full clothing line of around 60 pieces. The collection, which also includes bags and scarves, will be presented on Oct. 2 in a showroom at 22 Rue Visconti in Paris’ 6th arrondissement. Prices range from $400 to $4,000. “Since I started, I have been trying to use elements of streetwear and translate them into higher end clothing…I want to continue to push this idea,” said the Paris-born, Tokyo-based designer, adding that his concept was linked to the resurgence of BMX, playing with volumes and trying to integrate the attitude of the streetwear scene. Expect a new shoulder for jackets, new volumes on pants and shorts, oversize rainwear items plus shirts and special pieces built from David’s scarves format.

Winner of this year’s prestigious Andam fashion prize, Hakaan, the high-end London-based label that boasts heavyweight fashion photographer Mert Alas as its creative director, will show in Paris on Sept. 29 at the Palais de Tokyo. Founder Hakaan Yildirim confessed to having butterflies. “It feels very exciting and also very scary at the same time. It’s a dream come true — only too soon,” he said.

He counts Madonna, Marisa Tomei and Rose Byrne among celebs who have worn the brand, with Harvey Nichols, Joseph, Colette and Opening Ceremony among its retailers.

Inspirations cited by Yildirim for spring include form, formation and visual memories. “There are geometrical studies in this collection,” he said, “mixed with some nostalgia.”